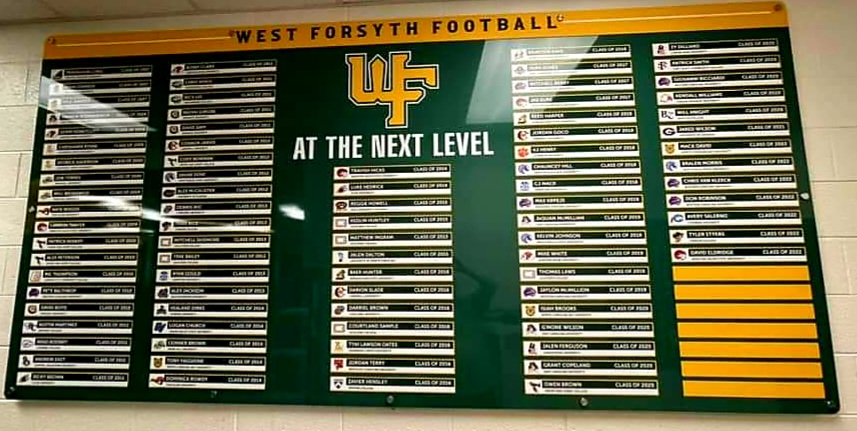 A new addition to the wall outside of Coach Adrian Snow’s office at West Forsyth is a welcome distraction for the West Forsyth football program.

A new board, featuring the names of former players in the program and their college destination, offers a glimpse into the proud history of the program and an opportunity to provide a journey to the past by bridging the present — and the future.

“I’ve already had a few of our current guys come up to me and tell me how cool this is and how much they want to have their name up there one day,” Snow said. “And the best part of this is, this is only the beginning. We’ve got plans to go back with names as far as 1965. It has been a fun project for us to research this and hear from former players from way before I was here. And we will get them all added soon. Real, real soon.”

The first wave of names, which are on their own individual plates, date back to 2007, a couple of years before Snow took the reins of the program in 2009.

Names like Kyle Jarrett and John Stamper (Wake Forest) occupy the first row, in addition to Pete Balthrop (Western Carolina), Ricky Brown (Elon) and Travaughn Long (Coastal Carolina), the first name on the board from the Class of 2007.

“Anyone who has ever worn this uniform and gone on to play at college at any level for at least one season will eventually see their name up here,” Snow said. “We’ve got plenty of room on this wall to expand this to either side right now to add those names that aren’t on here yet. And now that this is up and the word is getting out, we are hearing from a lot of people and former players so we are sure not to leave anyone out.”

Brad Bovender, an assistant coach for the Titans, graduated from West in 1994 and went on to play at North Carolina. He, along with his older brother Gray (Class of 1991) will eventually see their names on the board as well. Bovender has been one of the ringleaders of the project.

“About 10 years ago, we decided we needed to starting looking into doing something like this,” Bovender said. “We wanted to go and find every roster we could, so I went back through every yearbook I could find, went to the offices of the (Clemmons) Courier a lot to look through old papers to find team pictures, which I found for every year except one. We decided to start where we did because most of our kids now know these kids’ names. It’s relative to them. And we’ll work our way back from where we are now. It’s been a lot of fun to look up there and see a name and go, ‘oh, he owns this business now and this guy is up in New York…’” The best part for us is that not only is a stroll down memory lane, but we can get other people in here and it is a stroll down memory lane for the entire community.

Jonathan McIntosh, the current defensive coordinator who has also helped to gather names, echoed the same sentiments as Bovender.

“I think the most fun thing about it is that every day, we can sit in here and see a name and remember a fun story about that player’s time here,” said McIntosh, who was the starting center on the football team before graduating in 2004. “Every day, we seem to find a new story about this kid or that kid and that brings back a lot of great memories.”

He has been an assistant for Snow since Snow’s second season with team. “It’s a lot of fun to see these names and recognize all these kids for going on to play at the next level. This is another way of showing our appreciation to them for what they have done for the program.”

Snow is proud to see the fruits of their labor.

“We kind of had this ready to roll before COVID but we had to put it on the back burner once that hit,” Snow said. “I had been kind of working with a group in Ohio at first but came across American Custom Graphics, right here in Clemmons, so I gave them a call. I sent him a few proofs and he sent some back to me and told me, ‘Coach, I think we can do it.’ At that point, we had the money, so I told him, ‘Let’s roll.’”

Snow also has plans to make another board that will list any player back to 1965 who has ever played in an all-star game or the Shrine Bowl.

As soon as Snow put the photos of the board out on his social media, he began to get immediate feedback.

“Lots and lots of positive comments so far and it’s just been really neat to hear from so many people who love our program,” Snow said. “There is just something special about football, and especially football in this community, and this is just another example of how this game can bring people together. That really means a lot to our program, to our school, and to this community.”

And a few more recent, familiar names like G’Mone Wilson (East Carolina), Giovanni Ricciardi (Western Carolina) and Zy Dilliard (Lenoir-Rhyne).
But it also includes several names from Snow’s first year with the program in 2009. Snow motions to the board as he starts reeling off some of the names.

“You talk about guys like Dedrick Anderson (Johnson C. Smith) and Landon Thayer (Winston-Salem State) and Jon Torres (Mars Hill), who are every bit a part of the foundation of this program as some of those other guys,” Snow said. “That’s exactly why we are doing this. I know how much football has meant for me and what this game has done for me. And what I always tell my kids, football is a vehicle to get your education. And if you can use football for that, let’s do it. And as long as they have played a year at any level of college, they will have their name up here.”