Wanna step outside? The big one that didn’t get away 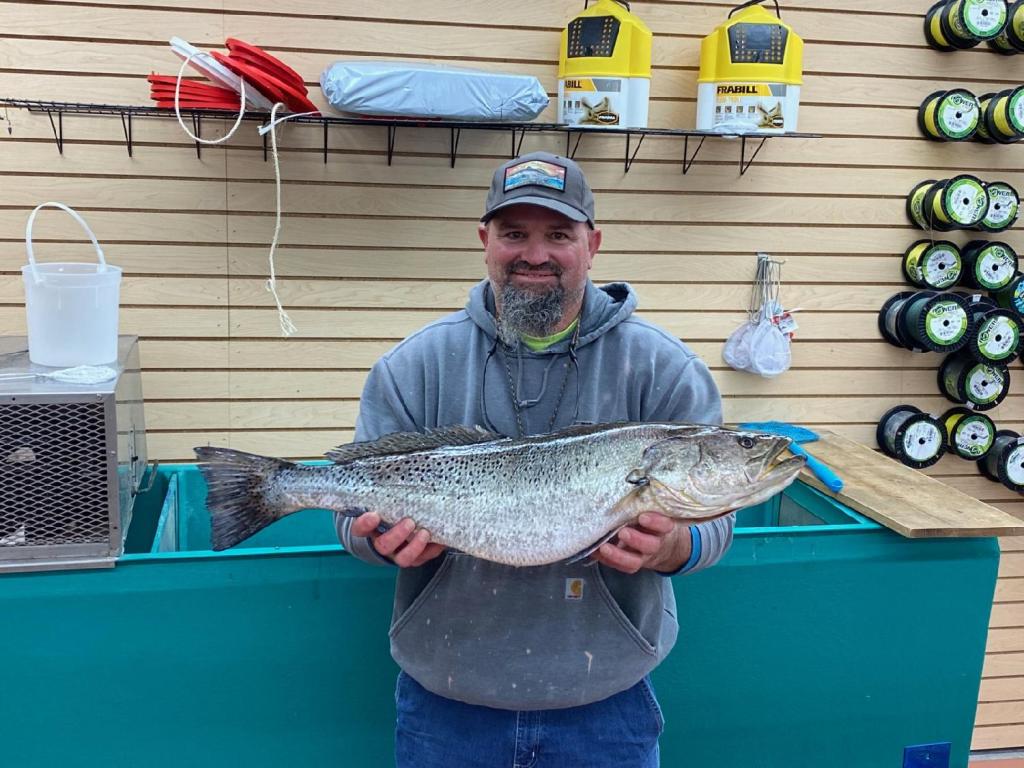 After 61 years, one of North Carolina’s most-cherished state fishing records has fallen.

Todd Spangler of Merritt caught a 12-pound, 8-ounce speckled trout in the lower Neuse River on Feb. 9 that broke by 4 ounces one of North Carolina’s longest-standing records. The previous state-record, caught in 1961 off Wrightsville Beach, weighed 12 pounds, 4 ounces.

Spangler’s huge speck was 33½ inches long and had an 18-inch girth. His first bite of the day, the big speck hit a Z-Man jerkshad fished on a custom-built spinning rod, Daiwa Procyon reel and 20-pound braid.

According to published reports, Spangler was fishing in a protected harbor around 8 a.m. when he hooked what he initially thought was a striper. It wasn’t until he had the trout almost to the side of his boat that he was able to identify it as a speck. Once netted and safely in the boat, Spangler and a fishing partner weighed the fish on a set of portable scales at 12.52 pounds. His partner looked up the state-record online, and they headed to Neuse River Bait and Tackle in nearby Grantboro to get the fish weighed on a set of certified scales. The fish weighed 12.50 pounds, confirmed by a biologist who visited the store later.

North Carolina anglers have been catching quite a few big trout this past fall and winter, owing in part to a half-dozen or so mild winters in succession that have spared specks from cold-stun kill events that naturally cull the population seemingly every few years.

Mountain trout close down for a month

A different kind of trout — rainbows, brooks and browns — will be off-limits to North Carolina anglers in a few days, when 1,000 mile of hatchery supported trout waters in North Carolina’s mountains will close to fishing on Feb. 28 at 11:59 p.m. They will reopen at 7 a.m. on Saturday, April 2.

Staff members with the N.C. Wildlife Resources Commission will spend the month that’s closed to fishing by stocking around 964,000 trout into streams. Most will be at least 10 inches long, with a special few — about 4% — being at least 14 inches long. About 40% of stocked fish will be brook trout, 40% will be rainbows and 20% will be browns.

When trout season opens on April 2, anglers will be allowed to catch seven trout per day, on any kind of bait, with no size minimum.

Trout will be stocked in almost 200 bodies of water in 28 different counties. Fish are hatched in three state hatcheries — Armstrong and Marion hatcheries in McDowell County and Setzer hatchery in Transylvania County — and about 60,000 trout destined for streams in Northwest North Carolina are grown out over the winter at Table Rock hatchery in Burke County.

Trout season does not close in any waters that are not stocked.

Fishermen across North Carolina mark their calendars for the spring striped bass season on the famed Roanoke River spawning grounds — one of the world’s most-famous fisheries — but this year, they won’t have to mark off too many days.

The reason: past overharvest of stripers, according to a 2020 stock assessment, which indicated that stripers were overfished. Last season, fishermen were allowed to harvest 12,800 pounds of stripers — down from 68,750 pounds in 2020 — but restrictions put in place still allowed to many fish to be caught, so the 2022 quota has been reduced to 6,575 pounds.

During the four days when harvest is allowed, fishermen will be allowed to keep one striped bass per day, with a minimum size of 18 inches and a slot of 22 to 27 inches, between which no striped bass can be kept.

Management of stripers in the Roanoke River extends from Roanoke Rapids Lake downstream to the Albemarle Sound and includes the Cashie, Middle and Eastmost rivers.