Hanes soaring to new heights as a pole vaulter 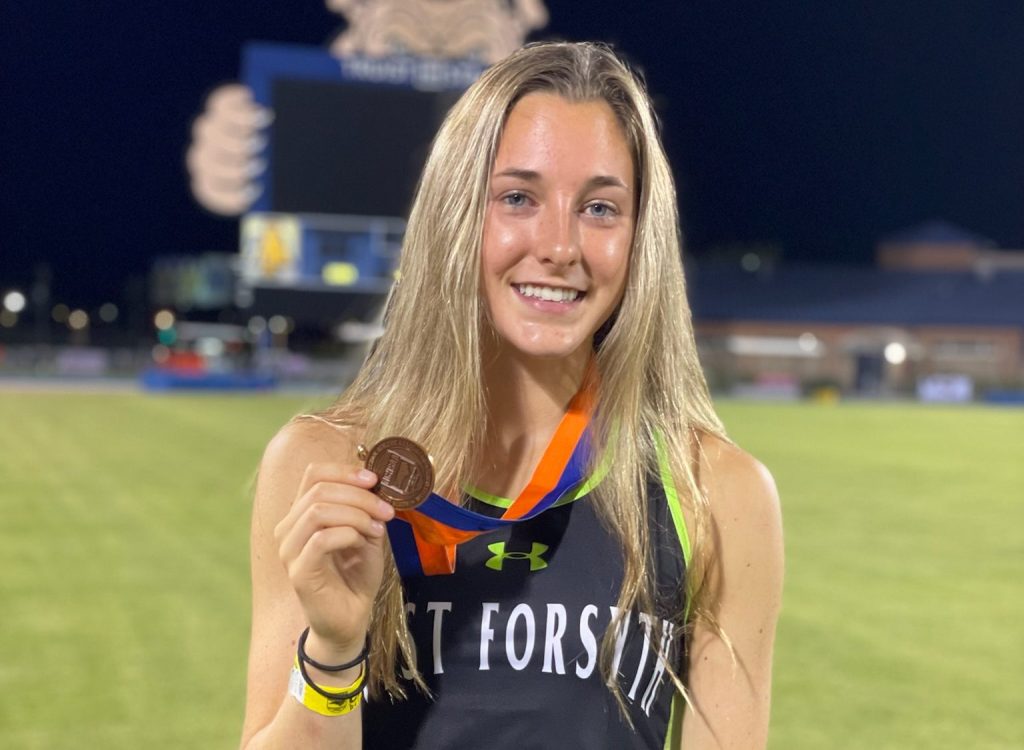 Pole-vaulting is a niche sport within the umbrella of a track-and-field team.

Hanes finished tied for fifth at the NCHSAA Class 4-A indoor track-and-field championships with a vault of 11 feet on Feb. 12 at JDL Fast Track, all with a stress fracture in her left leg, which is her push-off leg. Absher has the meet and state record of 13-6 and won the state indoor championship in 2019.

But to get to the elite level of pole-vaulting in high schools, Hanes, much like Absher, competed in another sport.

“I was a gymnast for many, many years up until eighth grade,” Hanes said. “And my best friend, and pretty much role model, is Lindsay Absher. She got into pole-vaulting, and we went to the same gym.”

Hanes and Absher competed at Vaulthouse in High Point, and Hanes also competed in another sport at West Forsyth.

“I’ve known (Absher) forever, and she was like, ‘Haley, you should really try this. I think you would enjoy it.'” Hanes said. “So, after volleyball season ended my freshman year, I went and I tried pole-vault at Vaulthouse in High Point for the first time. And I just loved it.”

Despite the five-year age gap, Hanes, who is 16, and Absher have a tight bond.

“She’s my inspiration for everything,” Hanes said. “And we’re very similar personality-wise, and she’s one of my closest friends.”

“(Hanes) came out of the same gymnastics facility (as Absher),” Newsome said. “So, the same way that I saw Lindsay, I thought, ‘Man, how great would it be if (Hanes) could pole-vault?’

“I remember when Lindsay was getting ready to leave, I remember seeing Haley, and I thought, ‘Man, they would be fantastic if we could get them.’ And low and behold, at Open House (Hanes) came by and introduced herself, and I was like, ‘You’ve gotta be kidding me. You’re that kid, you know? Oh, my.”

It didn’t take long for Newsome to see the ability that Hanes had.

“You knew sure as the world she was going to be good,” he said. “It’s just enough time and practice, and there’s a pretty good legacy, as far as that goes.”

“I ran track in middle school because I was always pretty fast,” she said. “I ran the 100, and I just had so many injuries in gymnastics. It was just getting to be too much to handle, just constantly in the emergency room, and a lot of stress-related injuries. So, when I went to high school, I just decided that I would stop gymnastics, but kind of use what gymnastics had taught me, and given me for other sports.”

In search of a sport to keep active, there were some bumps along the way.

“I tried pretty much everything,” Hanes said. “And I hated a lot of sports, especially basketball. But I had no technical ability whatsoever.

“But the pole-vault is the thing that really stuck.”

Don’t let Hanes fool you. She’s a good athlete, who is a fan of many sports.

“I love football,” she said. “I cheer for the Seattle Seahawks. I do enjoy playing basketball and pretty much any other sport. My family is such a huge soccer family.”

As good as Hanes has become in pole-vault, she didn’t immediately show the athlete should would become at West Forsyth. She also plays volleyball in the fall with Coach Lauren Gillon.

“I had an injury last year in volleyball,” Hanes said. “I was running to get a ball, sprinting across the gym, and I got the ball, but I ended up running face-first into the bleachers. And I ended up fracturing my chest and had to get stitches on my shin. I tried to get back on court after (it happened). It really wasn’t too bad. The chest thing was super-minor. It sounds like so much worse than it is, but it just a little spot. My shin, there’s still a bruise and a huge scar.”

Hanes recovered from her injuries in volleyball and transitioned to indoor track and field this past winter. She had a vault of 12 feet, but she pushed herself to the point of injury. This time, it was the dreaded stress fracture in her push-off leg.

“Leading up the state meet I had some pain in my left shin, which is my take-off leg for pole-vault,” Hanes said. “And I had a really great beginning of the season. I PR’d (personal record). I got 12 feet, which was tied for first in the state.

“And I think I just said, ‘OK, let’s go. Keep going.’ And I just overworked myself. I was doing many practices in a row because it’s such a repetitive motion. And I wasn’t very cautious about that.”

Newsome and West Forsyth jump coach Kristen Absher, who is Lindsay’s mother, along with Eric Morell, Hanes’ coach at Vaulthouse, realized there was problem.

“From what I understand, it’s a stress reaction, or a stress fracture,” Newsome said. “It’s hard to tell the difference. And that’s a repetitive, over-use thing. You don’t see it a whole lot in vaulters, but you can if they’re doing it a lot. It’s in the take-off leg, which I think it is. And timing was bad.”

Hanes just kept biding her time, hoping it would heal before the state meet.

“I might’ve prepared a little too much. I wasn’t being cautious or smart,” she said. “And so after (the) state meet, it definitely wasn’t my best meet. It was a learning experience. I was in a good amount of pain. And it was just something that I’ll always remember — great big struggle.”

After jumping 12 feet, Newsome and Kristen Absher were looking for Hanes to exceed new heights.

“I think she started off the season, she vaulted 12 feet pretty quick,” Newsome said. “We were expecting, ‘Man, you know, it’s going to be awesome.’ And she started struggling with some shin pain that kind of kept backing off much competing, or much training. Stress fractures don’t show up on an X-ray immediately.

“They have to actually start to heal before they’ll show up.

Maddie Davies from Raleigh Athens Drive won the NCHSAA Class 4-A indoor pole-vault championship with a vault of 12 feet.

“I think more than anything, what I gathered in the last couple of weeks of training before states was, ‘Something’s not right. Something’s hurting. I’m going to rest and hope that I could do OK at states.’ I think at states it was hurting and she could tell, and she just did the best that she could. Things didn’t fall into place.”

Hanes qualified for New Balance Nationals Indoors, which is March 11-13 in New York. However, because of her injury, she won’t be able to compete.

It’s a waiting game now. Once the injury heals, then it’s time for rehab in hopes of having some semblance of a spring track-and-field season.

“it’s very hard for me because I just want to like get back into it,” Hanes said. “But it’s something that I have work on, especially if I want to do this in college — learning when my body is trying to tell me to stop instead of ignoring. I feel like gymnastics, unfortunately, kind of teaches you that. Just ignore the pain and you’ll be fine. But you can’t do that anymore because long-term damage will occur.”

If Hanes can recuperate in time to get some meets in before the end of the spring season, she should be able compete for a state championship in May at N.C. A&T.

“I wouldn’t be surprised to see her approach 13 feet, but by the same token, if she doesn’t get there that doesn’t mean she hasn’t done well,” Newsome said. “That would do well at most colleges. Or she could exceed that. You just don’t really know. Not having a full, healthy indoor season makes it difficult to accurately predict what could happen. We just need a larger sample size of time to see how it goes.”

Being at the outdoor state championship is like home for Hanes.

“I’m really looking forward to the state meet,” she said. “I love jumping at the A&T track. It’s super-fun. All of the outdoor meets are really enjoyable because the pole-vault community is very small. I pretty much know everyone already. So, I just kind of refer to like the big meets, like the state meet as like a pole-vault party. And I try not to see it as too stressful.”

The pole-vaulters are even more tight-knit in girls competition. One of her best friends is Hannah Riley, a pole-vaulter from Mount Tabor. In addition, Hanes’ younger sister, Hannah, is a freshman on the girls track-and-field team at West Forsyth. having just finished 18th in the 500-meter run at the state-indoor championship at JDL.

Hanes wants to follow in Absher’s footsteps and compete in the pole-vault in college. Her parents, David and Holly Hanes, both went to N.C. State, but N.C. State doesn’t have pole-vaulting on the track-and-field team. Another option is North Carolina.

“I love (UNC’s) biomedical engineering program,” Hanes said. “And you can get a dual-degree from N.C. State and UNC. And I just think that’s so cool. And I love biology and want to go in the medical field. That would be perfect for me. Plus, I look really good in Carolina Blue.”

“I actually used (Absher) as a connection to talk to her coach, too,” Hanes said. “And she told her coach about me and put in a good word. So, Purdue is always an option. She (Absher) lets me know what videos to watch because pole-vault, it’s all about like seeing your form.

“And so, I have a YouTube channel where I have videos and practice stuff.”

With at least a portion of an outdoor season expected this spring, as well as a full season of indoor and outdoor for her senior season, the sky is the limit for Hanes.

“She’s a phenomenal student, so it would be a situation of where would she fit in?” Newsome said of Hanes’ choice of colleges. “The way college recruiting works is they essentially, typically look for what’s going to score for their conference meet, and the higher you can place in their conference meet the more scholarship money they’ll yield, and the bigger recruit you are.”

Play ball! SW Athletics gearing up for another season…