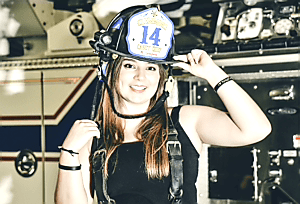 Kaylee Gianforte was recently recognized by the National Volunteer Fire Council as the National Junior Firefighter of the Year.

Gianforte was very shy when she moved from a previous cadet program to join the Clemmons Fire Department cadet program, but with the support of the department members she quickly embraced the fire service and gained the confidence and drive to move ahead. She regularly scheduled herself outside of school hours to come work with each shift to get different perspectives of what it takes to be a full-time firefighter. It soon became clear she was on a fast track to successfully becoming a leader in the youth program.

In January 2020, Gianforte took advantage of an opportunity to excel in her leadership development and was selected as the 2020-2021 cadet chief. In this role she led cadets during training, interviewed program applicants, marketed and advertised the program in the community, helped with teaching fire safety to elementary school students, and assisted the fire department with various tasks. She has worked especially hard to promote the program to other female teenagers that share an interest in serving their community through volunteering.

While her leadership skills thrived, Gianforte was initially nervous about teaching or speaking in front of others. However, she exceeded expectations by thoroughly researching the assigned topics and putting together better training classes than many experienced firefighters can do. The department’s leaders could see her self-confidence growing as she taught, and the audience was very in tune with her discussion. After her first class, Gianforte realized that she knew her topic so thoroughly, she lost the nervous feelings. She has since taught many trainings and also has become a mentor to newer cadets to share her knowledge with them.

Gianforte was a key player in planning and executing the cadet program’s first fundraiser golf tournament. She and the other cadets reached out to community businesses for sponsorships and donations, as well as advertised the tournament to potential players. As cadet chief, Gianforte supervised the other cadets on the day of the tournament and helped them with any issues or questions they had.

Gianforte is looking forward to continuing her fire service career. After graduating high school early, she started at the Firefighter Academy at Forsyth Technical Community College in January 2022.