Still Standing: Shelby Lowder has fought through a series of injuries during her career at West Forsyth 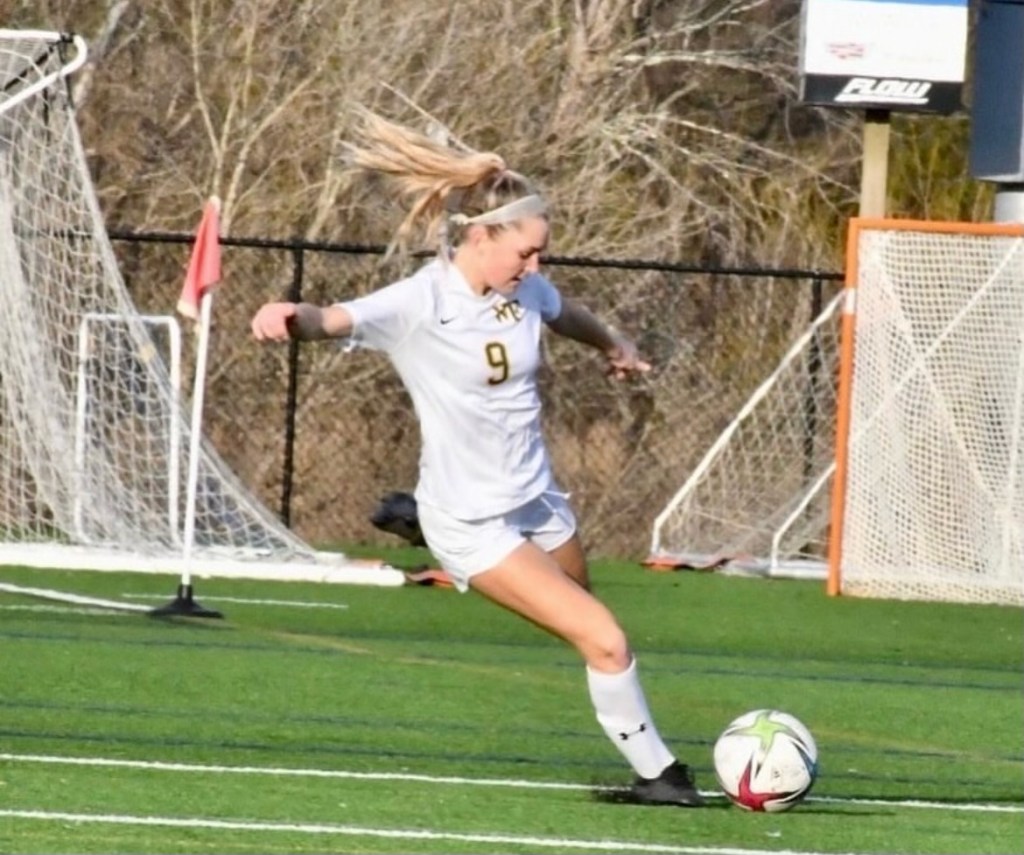 submitted photo Shelby Lowder has fought through several injuries during her sports career at West Forsyth. She's hoping to finish her senior season on the soccer team on a high note.

Injuries are part of any sport, but it’s the perseverance that defines how an athlete adjusts to the injury.

Shelby Lowder, a senior on the West Forsyth girls soccer team has dealt with myriad injuries in her four years for the Titans. But no matter the injury, she has still managed to get up and continue playing.

“I don’t know if I’ve gone a season without something happening,” she said. “That’s my goal this season.”

Lowder broke her wrist just before her freshman year and she hurt her ankle twice her freshman season, all while running cross country, finishing 26th in the NCHSAA Class 4-A state cross-country championship with a time of 19:49.55 at Ivey Redmon Sports Complex in Kernersville. Because of a broken wrist, she wasn’t able to compete in indoor track and field. However, she did run outdoor track and played soccer that spring.

Adding insult to injury, her sophomore year, she broke her left hip, from what she said was “overuse.” She ran cross-country and indoor track her sophomore year, finishing 21st in the NCHSAA Class 4-A state cross-country championship with a time of 19:29.49. However, outdoor track was canceled that season because of COVID-19, and girls soccer was canceled after just five games.

The injuries just kept piling up for Lowder. Even though she quit running cross-country to focus on soccer, she dislocated her knee during the preseason last year while playing 7-on-7. During tryouts for soccer her junior year, she chipped a bone in the same knee and missed most of the season.

“You just feel for a kid who really is kind of a throwback player in that she is the, ‘Tell me what you need me to do, and I’m going to go out there and try to do it.’ type player,” West’s soccer coach Scott Bilton said. “And those are not as common as what we used to have.

“And so, I’ll use the term a lot of times, ‘a blue-collar-type player,’ and that’s how she is. She puts her head down and goes to work. She’s tough as nails to try and fight through all of these injuries. Seeing a kid in pain and a kid not be able to do what they want to do, and what they can excel at, it’s hard to see as adult. And as a coach, it’s hard to see as well.”

Despite all of her injuries her first three years for the Titans, Lowder is playing soccer this spring.

“I caught myself the first half of (last Friday against Greensboro Page in the Triad Cup) not committing to the ball because in the back of my head, I think mentally, ‘Oh, don’t get hurt right now, it’s the beginning of the season. You can’t do that,'” she said. “But I don’t think that’s the way to play or win. I don’t even think it’s fair for my teammates to play halfway.”

West Forsyth just started its season last week in the Triad Cup, and finished 0-2-1. West tied Northern Guilford 4-4 last Monday in the first round, but won the game in penalty kicks. It lost 3-1 to Northwest Guilford last Wednesday, and it lost 3-0 last Friday to Greensboro Page.

Bilton said he disagrees with Lowder’s assessment of herself.

“Last year when she first started to play again a little bit, I was probably the one saying, ‘Relax a little bit,'” Bilton said. “Because the way she plays, she plays without a lot of reckless abandon. So, if there is a toning down, I don’t see it much because that’s just the nature of her play, and the nature of her as a person, is that she does everything 100%.

“So, maybe if she’s fallen to 99%, maybe I haven’t seen that. But she is still such a hard worker and so dedicated to doing anything that she can to help the team.”

Soccer is something that Lowder picked up since she was 5 years old and has carried the love throughout her teenage years.

“I was into a bunch of different other sports and just fell into soccer the rest of my life,” Lowder said. “So, I stuck with it.”

Looking back, she is grateful for what soccer has provided her.

“It’s definitely created a good structure in my life,” Lowder said. “It kept me goal-oriented. It kept a balance in my life for sure.”

Now 18 years old, despite the injuries, Lowder, who is a tri-captain alongside seniors Christy Lauffenburger and Caroline Dailey, harbors no ill-will toward soccer.

“It’s where I created all my friends, almost all my friendships,” Lowder said. “And a lot of them, Christy and Caroline Dailey, who are both seniors, I’ve played with them since I started playing.”

The three played on the same club teams together growing up.

Fast-forward to today, when Bilton has all three of them as tri-captains.

“She, along with our other two captains, we all met and talked about one of the things that we have to do, is try to create some unity and try to bring this back to what it was,” Bilton said. “The three captains this year, with Shelby, Caroline Dailey and Christy Lauffenburger, they all three were with me their freshman year, which was really the last year of normal (because of COVID).

“And they experienced what we were like pre-pandemic, and they’re the only ones that are on this roster that really, really experienced that.”

Because so much has been interrupted the last two years, Bilton wants to help reestablish and bring back some more normal things for his players and students.

“One of my goals this year is obviously to play well, but also to show everybody, regardless of freshman, sophomore, junior, senior, to show them how this experience can be so valuable,” Bilton said. “And it’ll be something hopefully that they look back on fondly and cherish, and want to experience it again.”

During workouts for the spring season and when practice started in February, Lowder had a renewed interest in the sport that she loves so much.

The renewed energy Lowder brought to this season, after having a chance for her body to heal, was obvious.

“She said coming into this year, she’s ready,” Bilton said. “And while she has maybe some ailment here or there, which is natural with playing a contact sport, she is doing everything in her power to fight through that, to be able to experience this as best that she can.”

That’s coming a long way since she said she seriously considered giving up soccer because of the constant injuries.

“I think at this point, that’s what I’ve realized,” Lowder said. “I have different health stuff going on, and that’s probably some of the reasons for my injuries. That’s just the card I was dealt. And I’ve got to find a positive attitude and get through it.”

And get through it, she has.

“I am not surprised that she persevered because knowing her as that personality that she has she is going to push through so many things,” Bilton said. “When she is faced with challenges post-high school life, she is going to be successful because of that perseverance.

There are very few people I have met — adults, student-athletes, or just friends — that are as focused and determined that she is. And I think that this year, as we start to come back to more of a sense of normality, she’s one of the ones I’m so happy and excited for, for her to have that chance at normality.

“And someone that’s worked that hard deserves it 100%.”

Pushing through after a tough week last week in the Triad Cup starts with a scheduled game this past Tuesday at home against Forbush. West Forsyth then has home rematches with Greensboro Page on March 15 and Northern Guilford on March 17 before the heart of the Central Piedmont 4-A season starts, on March 21 at home against Mount Tabor.

“As a team, we need to be a little more positive,” Lowder said. “As a team, we’ve had a little bit of a rough start so far. It’s just how you finish the season. It’s not how you start it.”

Although last season was hardly a failure with an 8-2-3 overall record and 6-1-3 in the conference, losing 1-0 in the first round of the NCHSAA Class 4-A tournament to Raleigh Athens Drive, West Forsyth obviously wants to improve upon that.

“I think we can be one of the leaders, for sure,” Bilton said. “We’ve got a lot of talent. We’ve got, a great mixture of players, and so it’s my job and the coaching staffs’ job to make sure to put them in opportunities to where they can shine, and to where they can really show all of their talents.

“And I look forward for the challenge to it. And I think and feel very confident that we will get it going back to the way that West Forsyth has been known to play for a long time.”

Lowder plans to give up competitive soccer after the season is over. However, after graduation she plans on going to College of Charleston in the fall in hopes of following in the footsteps of her father, Gene, who is the CEO of Lowder, Inc., a site-development company here in Forsyth County.

“I think (Lowder) has proven that, I go back to her resilience,” Bilton said. “She came in as a freshman, saw a lot of success right away, both in running and on the soccer field, and then had some of those things taken away — some, injuries, and obviously, some things out of her control. And she has proven without a shadow of a doubt how dedicated she is as an athlete and as a young lady to make the best of every situation that she can.

Although competitive soccer will end for Lowder in May, she said she will likely play intramural soccer at College of Charleston.

“Personally, I’m looking forward to graduation,” she said. “It’s been a good ride, but I’m ready for the next chapter in my life. Not that anything bad has happened. It’s been a great four years, but I think I’m just ready for that next step.”