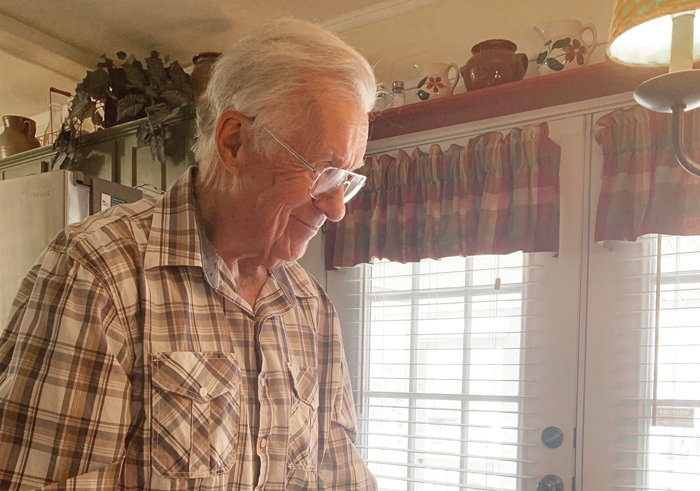 John Huffman grew up in Lewisville as the youngest of three boys. Raised on the bucolic Conrad Road, Huffman and his brothers helped their dad, Felix Huffman, with farm work. “A strong work ethic was instilled in all of us from a young age. I was always proud of my dad,” Huffman said. At the age of 19, Felix was asked by the owner, William J. Conrad Jr. (then treasurer/secretary at R.J. Reynolds) to be the farm manager of the 469 acres. The Conrads were distant relatives of the Reynolds family and had hopes of turning that pastoral area out on Conrad Road to mimic the Reynolda Estate. “Both my grandfather and great-grandfather had farmed and worked over at the Reynolda Estate too,” Huffman said. “William had been told by his brother, Robert, the head gardener at Reynolda Estate, that my dad would be the right person for the job.”

Huffman knew that helping on the farm that had employed his father was inevitable. “My dad managed that farm as if it was his own for 70 years. We did everything on the Conrad farm. We raised beef cattle for about 10 years before converting to strictly dairy cattle, and grew all sorts of crops from the garden. We grew all of our own food, and enough for the Conrad family, including the staff that was employed by them,” Huffman said. “We timbered and did hay, too.”

Huffman saw tangible results from all of his family’s hard work. “One of my prouder memories was working to grow the sugar maple trees on Conrad Road. My brothers and I were in charge of watering them. William J. Conrad Jr. had asked my dad to plant the trees originally just from his home up to 1010 Conrad Road. Later, my brothers and I would plant more up the road with my dad to span about a mile long. I was tasked with making sure that after they were planted, they received the proper watering amount. My dad would tell me down to the inch how much water they needed to ensure they grew to their fullest potential. Of course, when I would go get the water from Conrad Lake I’d swim every now and again to make it more fun when I’d go fill up the tanks,” Huffman said with a laugh. “Those sugar maple trees were chosen because of the color that they turn, it was never to make money from them. We would see William J. Conrad Jr. drive up and down the road several times a week just to admire them.”

Huffman learned other useful skills while growing up that would later serve him. “My dad was always teaching me something. He would overhaul engines and was a really good mechanic. I took an interest in that too, along with woodworking,” Huffman said. “He was always creating and making something, and I enjoyed doing that too.”

Huffman knew that while he had learned a lot from his father on the Conrad farm, he wanted to get a college education at Appalachian State University. “I thought for a while that I wanted to be a teacher. The idea of finally having my summers off was appealing,” Huffman said. “I received my bachelor of science degree in industrial arts.” After graduation, Huffman’s idea of becoming a teacher became true, although having his summers off was short-lived. “I had met my future wife, Barbara, in college and I wanted to earn additional income once we were married in 1966,” Huffman said.

Huffman taught in the Guilford and Winston-Salem/Forsyth County School systems for 20 years. “My area of expertise was vocational carpentry, mechanical and architectural drafting, and cabinet making. I taught shop basically,” he said. “The years on the farm really helped prepare me for this role in my life. It’s where my interest and passion has always been.” In the summers, Huffman would fix engines for Sears, Roebuck and Co.

“After 20 years of teaching, I knew it was time to do something different. We had our son, Andrew Ian in 1978, and I knew that I wanted a different career path,” Huffman said. “I was offered a position as a design engineer for AMP – Tyco. I helped design and maintain drawings specializing in high speed multi-station punch press dies in addition to mold and product design.” During Huffman’s career at AMP – Tyco, he and his family moved back home to Lewisville. “I had hoped to return home one day, although Barbara is from Greensboro so I wasn’t sure it would happen,” Huffman said.

Inspired by the return to his roots, Huffman began doing some general contractor work. “I got licensed as a general contractor and started building homes on Conrad Road before you get to the old Yadkinville Highway. It was very important to me to build responsibly. I designed and built five of them. We even lived in one of the homes we built first before moving to the home that I was born and raised in,” Huffman said. Huffman made his construction business his full-time job in 1988. Working on the same land that he and his father and brothers once spent so much time on brought meaningful memories back to Huffman. “Conrad Road really is an attraction for Lewisville. I’ve seen church and charter buses drive by slowly to take it all in. I’ve even seen people shoot commercials with the trees in the background,” Huffman said.

Huffman has since retired from his construction business, however, he has enjoyed living in his childhood home. “My son and his family also live next door to my wife and me. We now have three grandsons, so there’s another generation making memories here on our 2.89 acres,” he said. “I’ve made a scrapbook of all our family history for my family to have once I’m gone. I treasure the heritage that this place has, and all the memories I have made from it. It’s truly unique,” Huffman said. “My dad and grandfather were history buffs too, so I guess you can say it runs in the family.”

Still Standing: Shelby Lowder has fought through a series…