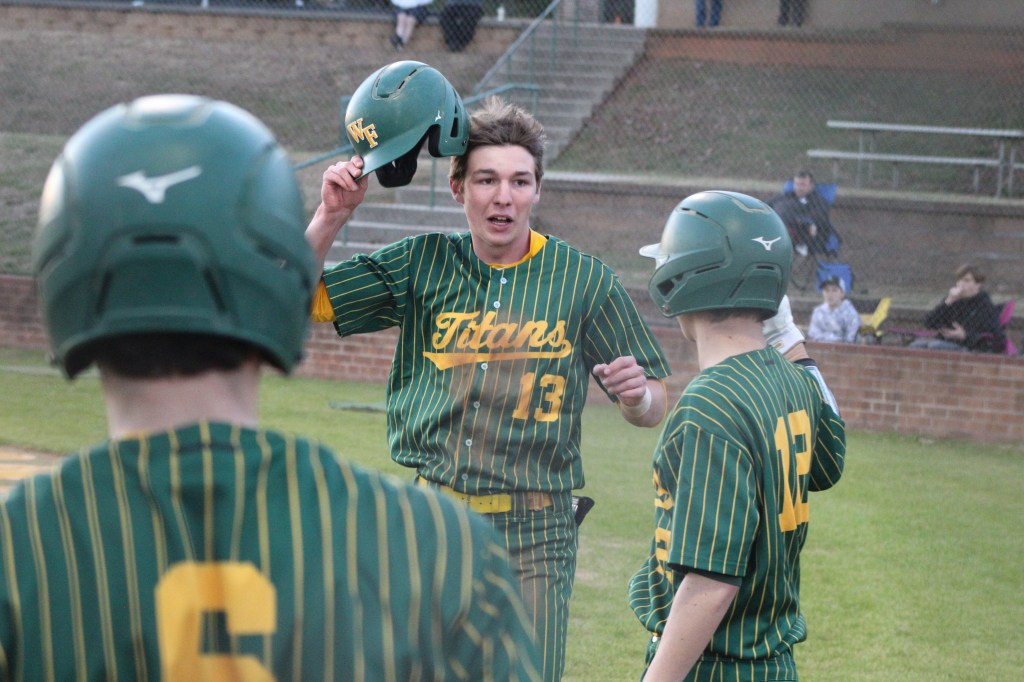 Patrick Showers is the quintessential student-athlete at West Forsyth.

As one of 10 seniors on the baseball team, Showers is a do-it-all player for the Titans as well as an excellent student who will be attending College of Charleston in the fall.

Showers, who grew up in Point Pleasant, N.J., about halfway between Philadelphia and New York, before moving to Clemmons in 2010, has blossomed into quite a baseball player for the Titans, who were unbeaten through their first five games of the season.

Showers, who is playing center field, is batting .667 with a home run, five runs, 10 RBIs, three walks, four stolen bases, and has a .917 slugging percentage. He has ignited an offense that has outscored its opponents 42-5.

“As a coach, it’s so awesome to see a young man come in at 14 years old as a freshman and truly watch them, mentally and physically, grow over four years,” Coach Brad Bullard said. “And he’s our leading hitter right now through the first two weeks of the season.”

“We played Tabor on Tuesday and we did not perform to the best of our ability,” Showers said. “And our coaches had a talk with us, and we were talking about how we could keep the energy up in the dugout. And we just went out there, kept the energy up the whole game and just had fun and relaxed and played how we should’ve.”

Bullard marveled at just how much Showers has progressed since his freshman year.

“We sort of joke about this about some of the seniors now, when he came in, he was a little lefty,” Bullard said. “Obviously, he can run well and he swung it from the left side, but he was a little kid. Probably between his sophomore and junior year he just hit a huge growth spurt.

“His speed is phenomenal and he has really, really, really hit the weight room very hard these past two years. He’s a big kid now. He’s probably 6-foot-plus and runs like a deer.”

Bullard, who played in Southwest Little League from 1989-2000 and still coaches and 8-and-under team there, graduated from West Forsyth in 200. He has seen and done some of the same things as Showers.

“He’s not pressing at all.”

The past two years have given Showers a chance to grow, mature, and assess where he is as a student and as an athlete.

After the first two weeks, Showers knew it probably wasn’t realistic that West Forsyth would be able to finish its season.

“It really wasn’t that bad, honestly, because we had travel ball,” he said. “But it was more devastating to see the look on the seniors’ faces when they were told. Just their senior year being taken away from them.”

Showers also went through remote learning the rest of his sophomore year. However, he had a slight advantage in his house. His mother, Jackie Showers, is a biology teacher at West. However, neither he nor his brother James, who is also as student at West, have had her as a teacher.

“Luckily, my mom helps with my schedule a little bit, so she put all of my core classes in the fall,” Patrick said. “It was a lot easier because she actually teaches online (for N.C. Virtual Public School), as well. She teaches online for a second job, so she knew how to use Canvas and Zoom.”
Jackie Showers is also an assistant coach with Coach Scott Bilton on the girls soccer team. At first, Bullard didn’t know Jackie well. That’s changed in the last couple years.

“We talk ball all of the time — whether it’s soccer of baseball, and different coaching strategies, Bullard said. “So, it’s good to get that (perspective) from a female and get it from a different sport to sort of hear different perspectives.”

Although last season was shortened, West Forsyth was able to play a full season. This time, Showers moved up to varsity.

At the time of his demotion, Showers was playing third base.

“It was tough,” Showers said of Bullard’s discussion with him. “I mean, I really wanted to play, but I knew I wasn’t performing at the plate. I knew there was a guy who could do better than me and help the team out more at the time.”

Showers took the discussion to heart and has worked hard to become a better player.

“He came in as an infielder and played a lot of infield as a freshman and sophomore,” Bullard said. “But we’ve got a lot of depth in the infield, and I give Patrick credit. He saw that and he’s a great team player.

“I think between knowing the depth we have in the infield and knowing his speed, and he’s also got a plus-arm. It honestly just sort of worked out. And we moved him to the outfield, just giving him the opportunity. He worked a lot in the outfield last year. When he got the opportunity as a junior, he took advantage of it.”

The switch to outfield has been beneficial to Showers.

“He’s worked really hard this offseason to become a better outfielder,” Bullard said. “And once again, he’s off to a phenomenal start.”

According to Showers, his struggles were all mental.

“I worked through it at practice and got to pinch-hit a couple times (last year) at the end of the season,” he said. “And I specifically remember putting a bunt down in a game against Reynolds. And that kind of got me started.”

He was then able to rationalize the ups and downs.

“I realized that baseball is all mental,” Showers said. “And it’s a game of failure. And you’re going to fail and that’s alright as long as you keep working through it and get better.”

Part of his having fun this season is related to his decision to give up baseball at the end of season. He flirted with the possibility of playing for Navy or Army, but those chances fell through the cracks.

“I wanted to play for the Naval Academy, but that didn’t end up working,” Showers said. “I went to a few of their camps and that didn’t work out. And then I went down to Georgia to play in the big tournament that’s always down there, and Army was there. And Army got in contact with me. They brought me up for a visit and had me do a workout.

“And they were interested. I just didn’t perform well at the workout. Nerves got to me.”

Showers and Bullard had some one-on-one conversations this past fall.

“Patrick and I sat down a few times and had some very open, honest conversations,” Bullard said. “You know, he’s a very smart kid. I think the thing that stood out when I talked to him early on was, he’s got goals. He’s got a plan for the next four years.”

Showers stayed steadfast in deciding to give up baseball after his senior season.

“That’s something I told Patrick. I told him that numerous times in the fall. That’s just a decision he (made).”

Showers plans to graduate from College of Charleston with a degree in exercise science and follow that with pre-med, possibly becoming a doctor. Showers said part of his decision to become a doctor is because his father, Chris, has a family history of heart problems. Showers’ grandfather and Chris’ father, Rich, had a heart attack several years ago.

In addition, Showers has an unknown condition that doctors feel is kidney-related where he becomes dizzy and loses feeling in his arms on occasion.

“I went to the Navy camp (last summer), the Navy baseball camp, and then I went to see my grandparents and family in New Jersey the week after” he said. “So, we left from the Navy camp (in Annapolis, Md.) to there. And I just didn’t feel right. I was walking down the street and I felt this like tingling sensation in my left arm. And I almost passed out. I was just freaking out.”

It progressed from there.

“We went to the ER because it happened multiple times after that. Just feeling really light-headed and nauseous. I’m still going to the doctors about it. They’re saying it could be something related to kidney.”

Showers passed his physical, but he and Bullard have to be mindful of his condition.

“The good news is, he’s had a lot of tests done and a lot of work done,” Bullard said. “I think everything to my knowledge has come out good, so really it’s been one of those things, you keep an eye on him, checking with him and making sure he feels OK. Anytime you’re dealing with a kid getting dizzy and feeling numbness that’s always scary.”

Showers and the Titans still have a long season ahead, which resumed this past Tuesday at Parkland. They also play host to Oak Grove on Thursday in a nonconference game and play Parkland again on Friday.

The Central Piedmont 4-A is one of the toughest baseball conferences in the state, so it won’t be easy for West Forsyth, which finished 8-6 overall last year and 6-4 in the conference, missing the playoffs.

No matter how West Forsyth finishes this season, Showers will cherish the memories forever.

“It’s just a great community,” he said. “I’ve been going to West baseball games for a while. All the kids used to go, and it’s just something to look forward to when you get older. Now I’m here.”