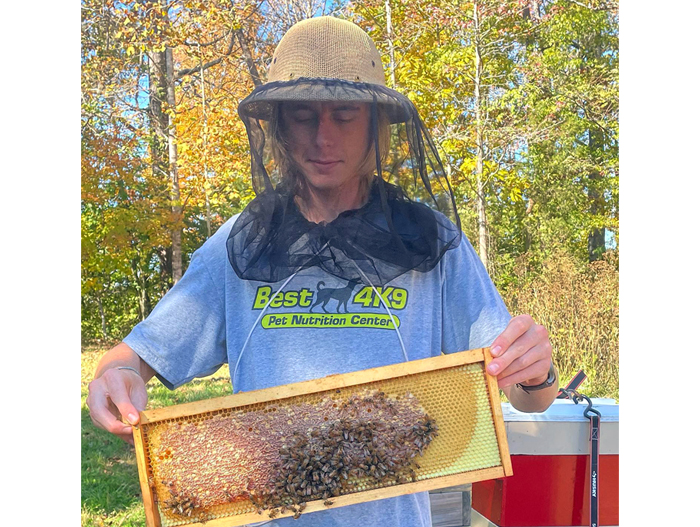 Allen Pickett grew up in Winston-Salem as the oldest of two siblings. “Having a brother only 2½ years younger than I am, we were and have always been very close. He’s one of my best friends,” Pickett said. Having a close family has been a value that Pickett appreciates. “I recall my mom walking me to Summit School as a child. We both have retinitis pigmentosa which is a genetic condition that affects our vision capabilities. Because of that, being able to walk to school was a nice option since driving a car was a challenge. It turned something that could have been an obstacle into a nice experience with my mom,” Pickett said.

Pickett appreciated his time at Summit School all the way from kindergarten through his freshman year of high school. “I have so much respect for Summit School and the education that I received. The genuine nature and predominant sense of good heartedness to build a complete student and person was refreshing,” he said. “I was likely dyslexic, and teachers like Barbara Scantland helped ensure that I got help with linguistics and assisted in my vocabulary.” Pickett also appreciated the introduction to a variety of arts, such as photography and pottery. “I think my early exposure to the arts at Summit helped play an influential role in wanting to delve deeper into more creative aspects in life,” Pickett said.

After Pickett graduated from Summit School in 2011, he attended Forsyth Country Day School for the remainder of high school. “It was on our southeastern college tours to places like the University of Georgia, Clemson, and Wofford, that I discovered Furman University. I was drawn to the campus, smaller class sizes and was comparable to Carolina or Duke but not as tough to get into,” Pickett said. “When I decided to go to Furman, I chose business administration for my major and was very close to minoring in sociology.”

Pickett was awarded an academic scholarship to attend the university. Once a Furman student, Pickett began making friendships that he knew were meant to be lifelong.

“During my junior year of college, one of my really good friends passed away from an accidental opioid overdose. I felt like when that happened, a part of my soul died with him in May 2017,” he said. During that time, Pickett took a real inventory on the direction he wanted to take his career and life. “I knew that combating the opioid epidemic was something I wanted to take an active role and find solutions. My friend, Blake, who passed was hard on himself. He always worried about feeling like he had to conform to a version of himself that wasn’t authentic. When I graduated, I didn’t know how I would set out to accomplish a career that would help me in the quest to combat the opioid epidemic,” Pickett said. “I knew there had to be alternatives though.”

Initially Pickett came home and began doing handyman jobs before he worked at a plant nursery, Frank’s Perennial Border. “Because of my retinitis pigmentosa, I am unable to drive. Finding a job that honored my passion and also worked with my vision impairment was important. I can see at about 75% during the day and 25% at night,” Pickett said.

Pickett had always enjoyed being outdoors.

“In the summer of 2018, I started hearing about cannabidiol (CBD) and the positive impacts it had on anxiety and depression,” Pickett said. “I began learning so much. We began growing hemp on a quarter acre in Lewisville. The evolution of learning about the process was fascinating. I went to trade shows, networked and realized how important it was not to rely heavily on the front or back end of the process,” he said.

Pickett analyzed how he could fit into the market and make it work. He also incorporated his and his dad’s affinity for beekeeping on their Lewisville farm into the products he made. “I realized that much like the impact of the opioid epidemic, the loss of the honeybee and greater pollinator population would severely impact the environment and our societal function,” Pickett said. Thus, Honeybee Hemp Farms began selling their products from CBD honey (in both the sticks and jars) and CBD salve (topical form).

“My next big push in the market involves dog biscuits. I’ve always had a special bond with dogs, and the idea of helping them too was intriguing to me. Recently, I’ve extended my brand for Honeybee Hemp Hounds to incorporate calming treats and ones for hip and joint issues,” Picket said. “It was a natural fit after also working at Best 4K9, a local natural pet store part time.”

As Pickett continues to grow and expand his brand, he is grateful for the opportunity it intertwines with his passion. “I’m getting ready to open up farm tours as the weather gets warmer. Aside from the products, I am very passionate about the education piece of why we do what we do. I also plan to have a music festival out in the summer to engage the public as well,” he said. “I’ll post those times and events on the Honeybee Hemp Farms social media pages and our website. I hope folks will be as excited about it as we are and will learn a few things that they didn’t know before they came.”

Coming of age: Patrick Showers flourishing for Titans in…