Nine pickleball courts to be added at Joanie Moser Park 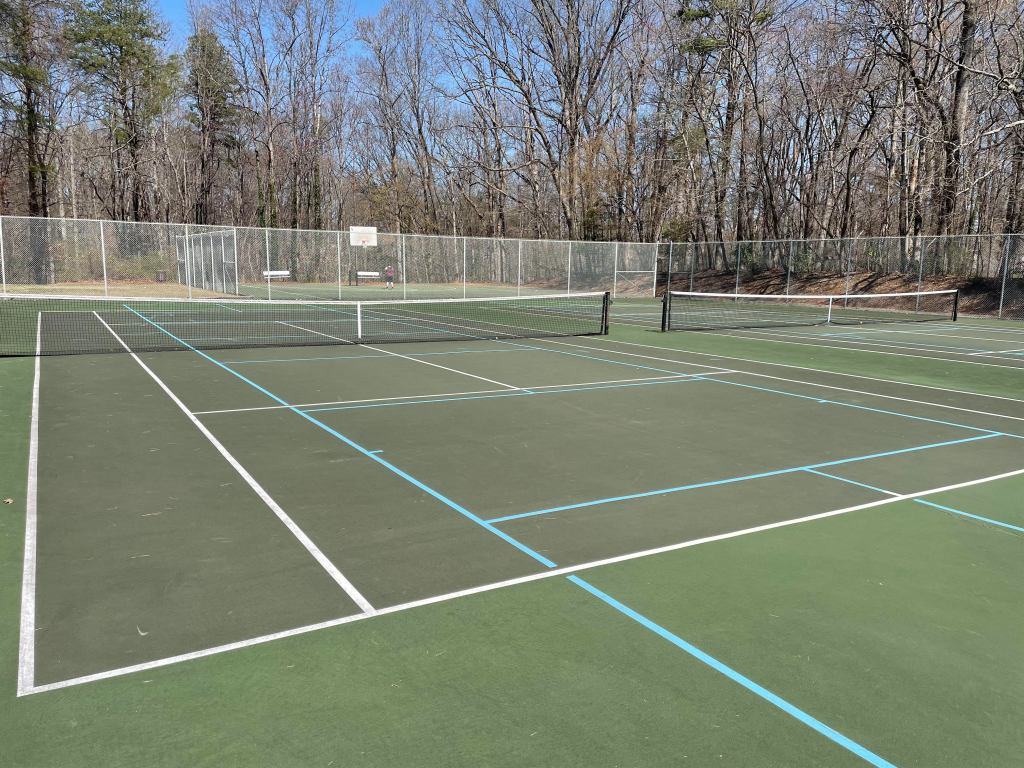 Jim Buice photo Two tennis courts and one basketball court at Joanie Moser Park will be converted into nine pickleball-specific courts after Forsyth County approved spending $200,000 in support of an upgrade of facilities at county parks for pickleball players.

County approves spending of $200,000 for complex to replace two existing tennis courts and one basketball court

During the March meeting of the Lewisville Town Council, mentions were made of familiar themes such as the Williams Road Gateway Project, the roundabout at Lewisville-Vienna Road/Robinhood Road and the wave of PARTF grant meetings.

But during the end of the manager’s report in the March 10 meeting, Mayor Mike Horn threw out an interesting tidbit that he had learned Forsyth County is planning on doing “a significant renovation at Joanie Moser Park, and they’ll be installing a lot more pickleball courts.”

Damon Sanders-Pratt, deputy county manager, confirmed that the county commissioners had indeed approved spending $200,000 in January toward development of nine pickleball courts at Joanie Moser. He added that the Parks & Recreation staff is doing preliminary research on constructing the pickleball-specific courts, which will replace the two existing tennis courts and one basketball court.

Sanders-Pratt said that in the county commissioners’ adopted fiscal year 2022 budget, they included a “board-directed Initiative” that read: “Study the feasibility of either modifying current facilities or adding facilities at county parks in order to continue to provide recreational opportunities for individuals wishing to play pickleball.”

After the commissioners’ action, Sanders-Pratt said that county staff corresponded with representatives of the local Pickleball Association to better understand the request.

“There were only shared tennis/pickleball courts between Forsyth County’s and the City of Winston-Salem’s park systems.,” he said. “Neither tennis or pickleball players prefer the mixture of lines on dual-lined courts, although they have been willing to cope with it. Additionally, when pickleball courts are oriented in the same direction as tennis courts and share a net, play is not ideal because tennis court nets are higher.”

After an October 2021 briefing on the subject, staff heard support for the initiative.

“From a windshield survey and anecdotally, there is a lot of pickleball play already taking place at Joanie Moser Park,” Sanders-Pratt said of the fast-growing sport that has evolved into a beehive of activity among a large number of players in the county park located in Lewisville.

With 4.8 million people now playing, which is almost double the number from just five years ago, according to the Sports and Fitness Industry Association, pickleball is a unique mix among tennis, ping pong and badminton, played with a paddle and a perforated plastic ball.

The county has 10 courts that are dual-lined for both pickleball and tennis — three at Union Cross, three at Walkertown Community Park and four at Joanie Moser.

In administrative reports in the council meeting, Town Manager Hank Perkins said that the final two PARTF grant meetings were held March 14 through Zoom and March 17 in an open house at the Mary Alice Williams Community Center.

“We’ve moved from ‘give us information, to this is what we’ve heard and this is where we’re going, to how does everybody feel about it,’ ” Perkins said of the process to hopefully secure grants or government funding to address future priorities for the town.

Horn said that the context of bringing up adding pickleball courts at Joanie Moser was that it may be among the considerations for PARTF grant funding, but “since we’ve learned of the county’s plans, we’ve removed those from consideration in our grant.”

Horn added that in just about every conversation the town has regarding recreational facilities, the topic of a dog park comes up.

“However, we have nothing in the works at this time regarding that,” he said.

Perkins said that the bid opening for Gateway Project is March 24, and then assuming the town gets a bid, “we’re going to be moving forward with DOT concurrence by April 14.

“Then in April, we’ll also have approval of the contract from town council for the project as well,” he said.

The Gateway Project was delayed in 2020 with the onset of the pandemic and then met with lack of response in 2021 because of the overall state of the economy and contractors being overwhelmed with work, according to Perkins.

Two different times, it was advertised last year with no bids received either time for the long-awaited project, which is highlighted by the widening of Williams Road and implementing a complete street design from the roundabout at Concord Church Road south of the bridge over U.S. 421 to the roundabout at Shallowford Road.

In another high-profile project, there was a public meeting March 16 via Zoom for the Lewisville-Vienna Road/Robinhood Road roundabout.

Stacy Tolbert, town planner, said that the single-lane roundabout is at 30 percent design and at the point of giving the public the opportunity for a first look.

“We did not have a very large number of attendees, but those who did attend were residents of that area that may or may not be impacted by the intersection improvement,” Tolbert said. “We gained good feedback and those that did attend were welcoming of the roundabout conversion. They agree it will increase the safety of the intersection.”

The roundabout, which was originally scheduled to coincide with the opening of the new school in 2021 but later pushed back a year to 2022, is now at least another year away because of further delays with NCDOT funding.

In other news involving the town, it was announced at the council meeting that the first movie night at Shallowford Square will be “Raiders of the Lost Ark” on Friday, May 6, and then on Memorial Day, May 30, the Embers will be performing in the first concert of the 2022 season.

West Forsyth senior hopes to take his talents from…