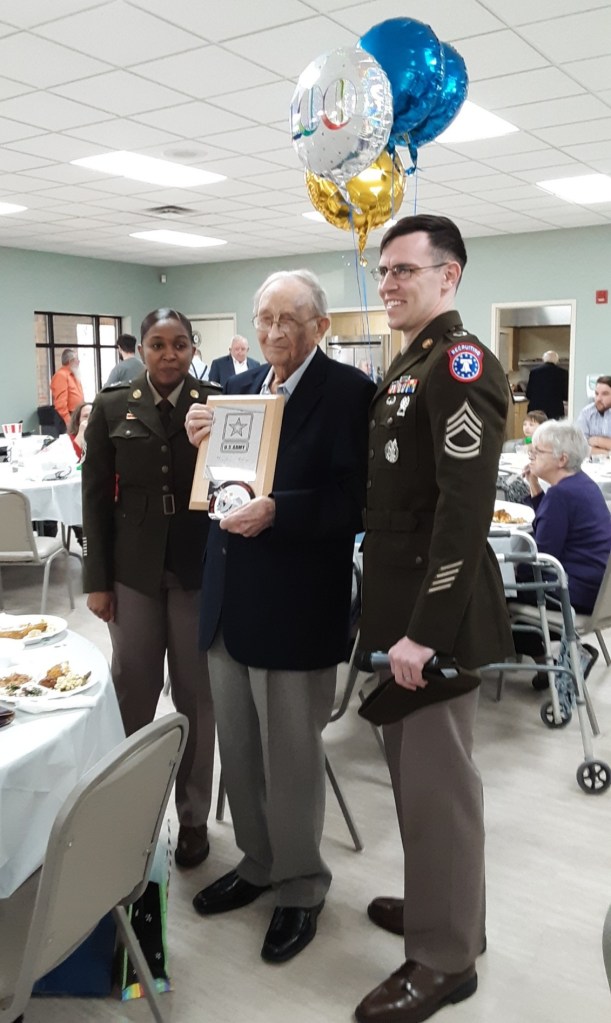 submitted photo Harold Doub (center) turned 100 years old on March 24 and was honored last weekend by members of the NC Army Recruiting Unit. Doub grew up in the Lewisville/Clemmons area and served in the ordnance unit of the Army during World War II.

Harold Doub, who grew up in the Clemmons/Lewisville area and served as a corporal in the United States Army during World War II, will celebrate his 100th birthday on Thursday, March 24.

Doub was honored by members of the N.C. Army recruiting unit at his church last weekend.

Doub was a longtime school bus driver for students in the area while attending Lewisville School himself. He credits that experience for preparing him to serve his country during World War II, where he was responsible for transporting Army vehicles to supply and command posts near Paris, France, as a member of the Army’s Ordnance sector.

Doub was chosen to be part of the contingent of World War II veterans to fly on one of the first “Triad Flights of Honor” that visited Washington, D.C., in 2010.

He is the oldest former employee of Piedmont Federal Savings and Loan and oldest former member of Warner’s Chapel Church of Christ.

He was an avid woodworking craftsman and prided himself on being a “weekend farmer” during his days with Piedmont Federal. He used to work his 10-acre farm of cucumbers and at one time owned hundreds of chickens he raised for commercial egg production.

Doub currently lives at Arbor Ridge Senior Community and still drives, balances his own checkbook, and does his laundry.

Happy Birthday, Corporal Doub. The Clemmons Courier salutes you and thanks you for your service to our country.