Settling in: Kevin Spainhour relishes being the principal at West Forsyth 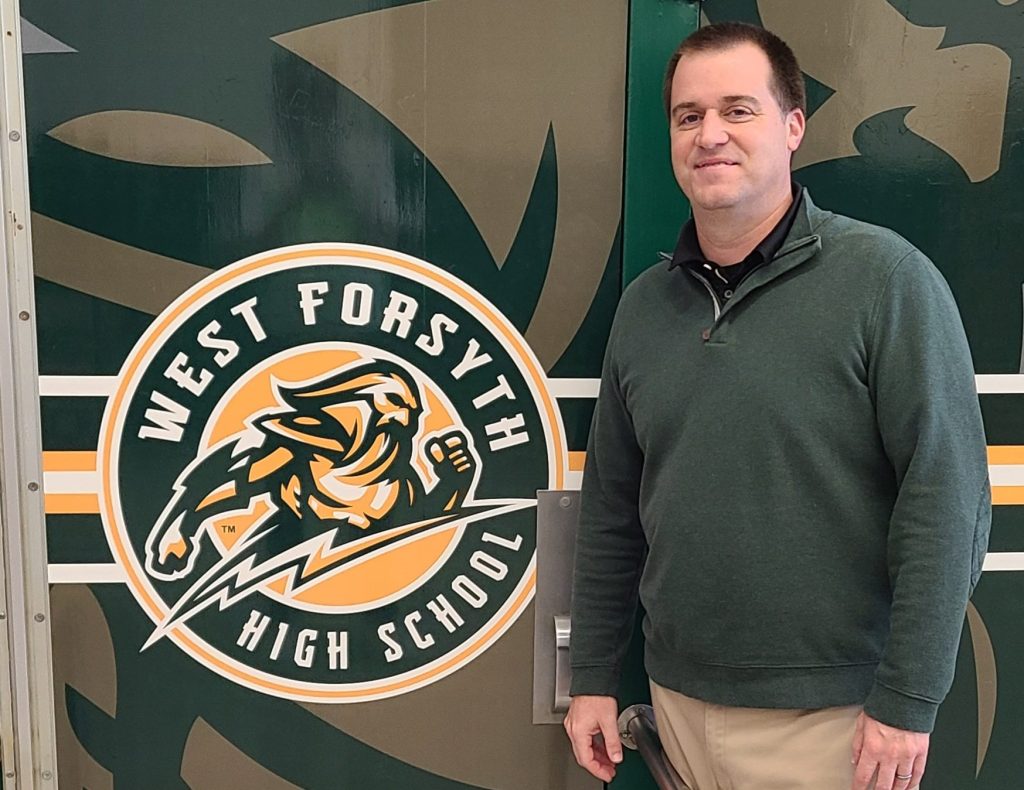 A little more than a year since his first day on the job as the principal at West Forsyth, Kevin Spainhour has settled in.

However “normal” and “routine” are defined as a high school administrator can very from day-to-day, hour-to-hour, and minute-to-minute. Especially in the wake of how COVID-19 disrupted daily life for the last two years.

But Spainhour, now firmly entrenched at his new school since March 1, 2021, has established his own “normal” and “routines.”

Whether he’s out and about to drum up conversation with students in the lunchroom or in classes or greeting the custodial staff with a cordial smile and handshake or sharing updates on his own children with other faculty and staff members, Spainhour has embraced his still relatively new role at West.

“It’s very important to be very present with those you are leading, no matter what it is you are doing,” Spainhour said. “That’s always how I’ve approached things. I’m not one of those guys who is going to sit in their office all day. I want to be out there, getting to know the students, getting to know the staff. I made that a priority as soon as I decided to come here.”

Spainhour bleeds green and gold now, but still has plenty of purple left in his closet after coming from West Stokes, where he spent eight years as that school’s principal.
His oldest daughter graduated from there last spring. He has two more kids still in school there and his eighth-grade son will attend there next year.

“I’m still part of that community, I just have a different role now there as a parent,” Spainhour said. “This is home now. And I’m grateful that I have a rock-star wife and mother who keeps our family grounded and focused because I’m not able to be there as much as I used to be. They’ve handled that transition pretty well. And let me assure you, my West Forsyth family was very generous when I started here last March. I was very blessed with a lot of swag and was able to fill up my closet with a lot of green pretty quickly. The purple and green do tend to clash in my closet right now.”

He still has vivid memories from his first days on the job at the Clemmons campus. He remembers the Zoom meetings he had with staff before he began his job and the warm welcome he received from them. And he appreciated walking into what he called a “well-oiled machine” when he arrived.

“I was fortunate that the school culture has been outstanding for a long time and that the commitment to academic excellence is there,” Spainhour said. “We have a very strong, veteran staff, led by a principal who did a great job during his tenure here. That allowed me the opportunity to spend that time last spring learning and not feeling like I was coming into an environment where I had to hit the ground running and create an environment of change immediately. That gave me the chance to get out there and start meeting all the students and faculty and getting to know them. I wasn’t going to come in a put in place any new initiatives on anyone and put them in any more undo stress that they were already going through because we were still in the middle of a pandemic.”

Although there weren’t a lot of students in the halls when school started back with in-person learning last February, Spainhour said it was an ideal time to ease into his new role.

“Even though we had a small number of students here at the time, it was still important for me to be seen,” Spainhour said. “And we kept getting more and more students returning to school every day, every week, and I’d find myself spending more time getting to know them. We’d have trivia contests and give away milkshakes as prizes, things like that I wanted to do so they could also get to know me. I’m a conversationalist. I want to get to know my students and staff on a personal level. A lot of times in education, we can get caught up in test scores and curriculum and legalities and we can lose sight of the people. We’re leading 2,300 students and the people in charge of leading them in the classroom. I need to know their stories and I try to do the best I can with that. It’s a work in progress, but I’m settling in.”

Spainhour praises his staff and administration for helping to make him feel more comfortable.

“I know I can always reach out when I have questions, because believe me, I still do,” he said with a laugh. “I’m still learning a new district, a new school, and whether policies and procedures already in place are ‘district’ or things we exclusive do at West. I really lean into my resources here.”

When the current school year began last August, it brought another sense of newness to the job.

“Everybody’s back in the building now and there wasn’t a blueprint for coming out of a pandemic,” he said. “Like every school, we’ve faced our share of challenges this year of getting the kids back into the routine of school and reacclimating students to a school and classroom environment. As an administrator, I’ve been looking at ways to continuously support our students and staff as we all continue to get adjusted. I think things really started to settle back down in January after we got that first semester behind us. The fall was hard, and I wanted to do as much as I could to take extra responsibilities off our staff’s plates. I wanted them to focus on the work they are passionate about doing. That has been critical for us this year.”

Spainhour is a former basketball player (Bishop McGuinness, Guilford College) and high school basketball coach. He relies on a lot of what he learned as a player and coach to help him form his philosophies as a principal.

“Coaching and being an administrator translates very well,” he said. “More than anything, it all comes down to how you deal with people and how you can motivate them to do what you need them to do by talking to them and not at them. I like to think that I can read people and situations pretty well and I credit that to my days as an athlete and as a coach. I feel like great coaches are lifelong learners and the same can be said for educators. You are constantly striving to find out what works and what areas you need to improve on.”

As the school year hurtles toward its end, Spainhour has relished the opportunity to have more time to get to know the West community.

There is a white wall in his office covered in green Sharpie ink with the names of almost all of the graduating senior class of 2022. Spainhour expects to have the last few names scribbled on the wall soon.

“This is something I used to do at West Stokes every year,” he said. “We didn’t get a chance to do this last year since we didn’t have everyone here. But this is one thing I really wanted to get started here because it’s a great chance to get to know these kids. They come through here with their classes or when they have a little break, grab a pen and sign their name. They think it’s pretty cool, too. But I want them to all realize I’m here for them, too. It’s important that we have the ability to know who our students are and for them to know who I am. That’s what it’s always been about for me.”