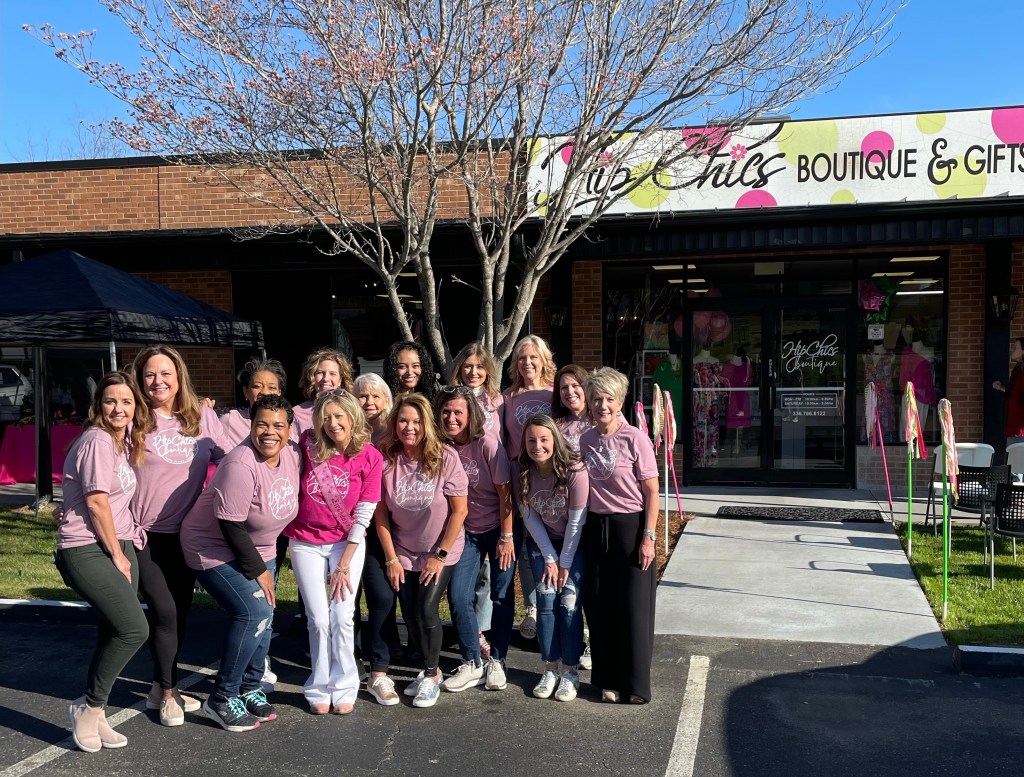 If you’ve lived near Clemmons for a while, you can relate to the excitement of receiving a gift in the iconic Hip Chics gift bag with hot pink tissue paper. Now, owner Kristina Prysiazniuk is excited to celebrate the store’s 15-year anniversary with the community.

“I just thank this community for supporting us all of these years and for being more than just customers,” Prysianiuk said.

The celebration last Saturday included a DJ, free fairy hair and face painting, a photobooth complete with props and balloons, and a candy buffet. Former staff returned to participate in a live fashion show. In addition, the first 165 people to check out received a gift, and all shoppers received a ticket for being there, but by spending $10, could gain additional tickets to enter in a drawing to win one of 20 gift baskets. Customers also received a 15 percent discount off everything in the store.

When Hip Chics first opened its doors in 2007, the rented space totaled only 400 square feet, but as surrounding shops closed, the boutique continued to expand. Fifteen years later, Hip Chics occupies 8,400 square feet and includes a formal wear shop across the street.

In fact, it wasn’t until a trip to the mountains for a scrapbooking weekend that her girlfriends convinced an initially uncertain Prysiazniuk to open the store.

“We got a tax ID, and went to market two weeks later. We didn’t have a handwritten business plan, not any of that. I was already renting the space here for my wedding consulting.”

Local resident Angie Halus has happy memories of shopping at the store throughout the years.

“When it first opened, there was really nothing like it. When the kids were little, we always came here for the latest trends like Webkinz and Silly Bandz. And who doesn’t love supporting a local business,” Halus said.

According to Prysiazniuk, it was Webkinz that put Hip Chics on the map.

“That is how people from all over learned about us. This was before social media. They were one of our biggest first products. We would have a list of people three notebook papers long that we would have to call when we got shipments in. We would practically be throwing them across the counter to people who wanted them. It was insane,” Prysiazniuk said. 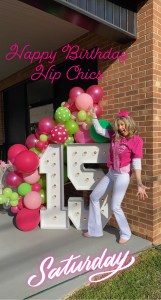 When Prysiazniuk’s daughter Logan was asked to prom her sophomore year, she tried to convince her mother to sell prom dresses. Prysiazniuk was strongly opposed to the idea, but the following year Hip Chics experimented, ordering around 100 dresses and did very well. The next year, they brought in more dresses and moved across the street and have been selling formal wear from that location the past four years.

“I loved having my own time slot to try on so it was enjoyable and not chaotic. I had fantastic help from the people working there. I especially like that they register the dress where no one else from your school will have the same dress,” Hobson said.

Not all of the unexpectedness in the life of Hip Chics has been easy, however. When COVID-19 hit, it produced a great deal of struggle, especially for the Formal Wear Shop.

“That was hard. Across the street took the biggest hit because there were no weddings — we do tuxedos — no formal events, nobody was going anywhere, no proms. Fortunately for us, a lot of moms did “mom proms” so we didn’t have to completely shut down. But it certainly had a huge impact on business over there,” Prysiazniuk said.

Hip Chics has always been unique and creative with their business, so they found ways to thrive amidst the tragic deaths of so many local businesses.

“We closed our doors, but we never closed… We were doing live shows on social media, we were FaceTiming customers,” Prysiazniuk said.

Around Easter time, Amazon deliveries were backed up and items were not able to arrive quickly enough. Fortunately, local customers could order on social media and Hip Chics would have puzzles and Easter baskets waiting for them on a table outside to pick up.

Throughout the pandemic, Hip Chics continued their culture of highly personal interactions during a time when the world was so disconnected.

“Granted, it still hurt us, but what it did was it kept us in front of the customers when everything else shut down. And we stayed in front of them, we stayed positive, we were sending out spiritual texts, we were saying ‘we’re praying for you.’ We were in front of everybody all the time through it all, and I think that helped us a lot,” Prysiazniuk said.

Prysiazniuk considers the unimagined success of Hip Chics to be a blessing since her husband has been out of work for almost nine years due to physical limitations.

“We stand strong on our faith here. We say faith, family and friends, that’s our motto. I think God knew what the plan was supposed to be. This has been our livelihood and not anything I ever anticipated, but it supports my family,” Prysiazniuk said.

“It’s such an incredible blessing. The women that I work with, we say that we are a family here, and we are. It’s the Hip Chics family, and once you’re a part of that family, you’re always a part of it,” Prysiazniuk said.

Settling in: Kevin Spainhour relishes being the principal at…