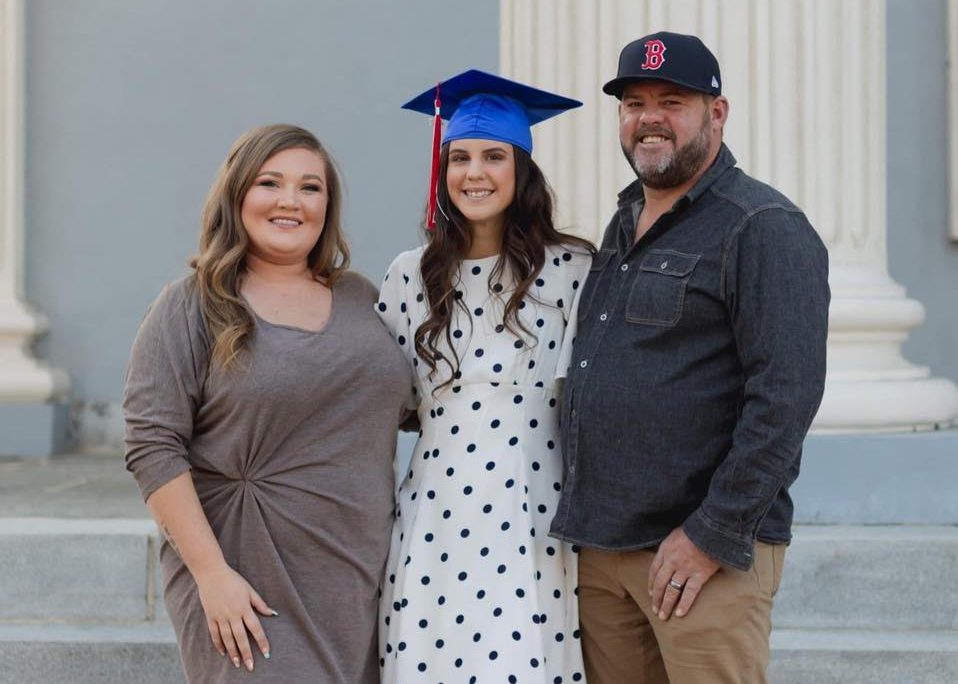 Blair Wilson spent her youth in Lexington. Born as an only child, her parents divorced when she was young. “Both of my parents remarried before I was 10 years old, and I went from being an only child to having step-siblings,” Wilson said. “Often times when I would spend time with my dad, he would take me to ride horses. I loved it so much and began weekly riding lessons.” Wilson’s love for animals was instant. “If I wasn’t riding horses, I was also involved in the choir and competed both regionally and nationally,” Wilson said.

Whether in the classroom or competing in choral competitions, Wilson focused 100% on whatever that was. Her efforts were recognized when she was awarded an academic scholarship to attend Guilford College. “I liked the smaller feel that Guilford had on campus. I also wanted to be close to home because my mom was having some medical issues that I wanted to be there for,” she said.

While at Guilford, Wilson earned a bachelor’s degree in criminal justice and a bachelor’s degree in community and justice studies. Graduating from Guilford in just three years, Wilson had taken advantage of the Cadre program which allowed her to work on campus for 35-40 hours at minimum wage and receive two free classes each summer. Her next step would be to get a master’s in human services from Nova Southeastern University. The program took two years to complete. It was a pivotal time for Wilson as she also reconnected with her future husband, Eric Wilson. “We ran into each other at Applebee’s of all places,” Wilson said with a smile.

As Eric and Blair began building their relationship, she was also gaining valuable experience professionally in the Office of Advancement for Guilford College. “I had worked for that office during my college years as well, and enjoyed it so much, I continued through my master’s program,” Wilson said. As a philanthropy assistant, Wilson helped fundraise, worked with donors, and with alumni, which was meaningful. “What I liked about working for Guilford, was I truly believed in what their programs offered students. I enjoyed sharing with people my firsthand experiences that I had found helpful,” she said.

After investing five years at Guilford, Wilson decided to make a change to a profession that was geared towards her double majors. The newlywed began working as the director of financial development for the American Children’s Home. “Raising money to help build opportunities for children was work that I found meaningful,” Wilson said. Wilson, who was by then the stepmother for Eric’s daughter, Erika, whose mother had passed away, knew the impact providing opportunities to children would have. Wilson also worked at the Nazareth Child and Family Connection in a similar capacity as their director of development. “The reason I made that move professionally was because it provided a mix of everything that I had worked on prior in addition to having an outpatient facility. They had a larger budget for community outreach to educate others,” Wilson said. After serving in that role for four years, the American Children’s Home became a United Way Agency, and their organization received the highest funding in the county.

“Although I really enjoyed my time fundraising for those organizations, like many people during the pandemic, I really did some soul searching for what I wanted to do long term,” Wilson said. “I spent some time helping my husband with his business for about three to four months while I gave it serious thought. I had always been passionate about animals from my childhood. I had always felt compelled to help save them from abuse and cruelty. When I came across a position with the Humane Society of Davie County for an executive director job, I decided to apply for it.” Wilson realizes that a lot of challenges for the Humane Society of Davie County is similar to her previous positions. “The Humane Society of Davie County relies solely on private funding sources. There are no funds given to the organization by the local government like other humane societies, so we have to fight for every penny,” Wilson said.

Wilson believes that having the Humane Society of Davie County’s presence is important. “We are currently in a bit of transition, trying to figure out if we will have a building or if we will be strictly foster based. Foster families are a huge need for our organization. We can’t say yes to helping an animal if we don’t have a family that is able to take them in while we get them the proper medical care and match the animal up with the right family,” she said. “Foster families play such a critical role in helping these animals who have been failed, once, twice, or maybe even more times.”

Wilson also believes that the Humane Society of Davie County has other roles that the community benefits from other than adoption. “I believe educating the public about the importance of spay and neuter is huge. Also, why heartworm prevention is lifesaving is something that many people still don’t much about. That’s where we can come in and help educate those folks,” Wilson said.

Wilson has three chihuahuas as family members. “Our most recent addition is what we call in rescue, a foster failure. We got a call about him on New Year’s Eve, and I knew no one else could likely take him that day because it was a holiday, so I brought him home. Let’s just say Bruiser Woods Wilson has never left,” Wilson said with a laugh.

Ensuring that animals from the many calls, emails and messages get good homes can be daunting. However, Wilson continues to honor the pact she made with herself at the beginning of the pandemic to honor her own mental health. “We spend a lot of time with my husband’s family that just moved to our area. We also have started traveling again, now that we are empty nesters,” she said. “Whether it’s a trip to the mountains, or the beach, we make sure to recharge when we can. It’s important to make it a priority.”