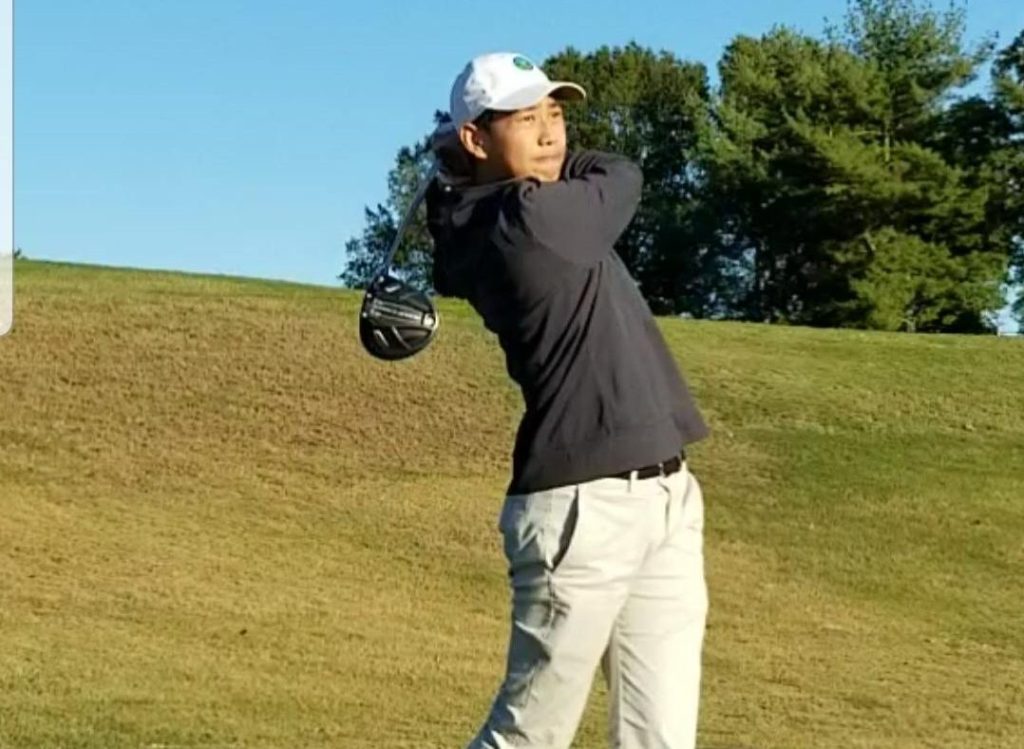 submitted photo Zach Liu warms up before a recent match

But don’t let that fool you. He is a high-level student with a 4.54 weighted grade-point average, and once he steps on a golf course, he lets his clubs do the talking.

Liu is averaging a nine-hole score of 41 midway through the Titans’ schedule this season.

“He’s not a kid that I would run across at West Forsyth,” said Kevin King, who is in his second season as the golf coach for the Titans. “He is an AP student. I think he’s really, really, really smart.”

Liu comes about it naturally. He was born in Charlottesville, Va., home of the University of Virginia, and when he was 7, the family moved to Gainesville, Fla., home of the University of Florida. His mother, Hulan Shang, was a researcher at those two colleges and eventually moved here the summer before Liu’s sophomore year at West so she could become a researcher at Wake Forest.

“I guess it’s not too different from how it is now,” Liu said. “Each town has been very similar. Here now in Winston, this area, has been the biggest community. It’s pretty interesting to be able to be able to be so close to the campus.”

His mother and his father, Jack Liu, both emigrated from China and became graduate students at Iowa State, which is in Ames, Iowa. Although they still have some family in China, they have settled in the United States.

You would think that somebody who grew up in college towns would be a big sports fan. That’s not the case with Liu.

“For golf, it didn’t impact me a whole lot,” he said. “I got to see a lot more courses. I’m not big into sports other than golf. I remember vaguely watching a couple UVa basketball games and that was about it. I probably attended like one or two football games at UF (Florida), but I was never big on sports.”

King added that both he and Liu had a conversation recently where King mentioned that King’s daughter, Mary-Paige, a star golfer at West Forsyth, was going to play in a tournament.

“When I told him I was going to Charlottesville, Mary-Paige was playing in a tournament,” King said. “And he said that’s where I was born. He said we moved to Florida. I would imagine that golf is probably the perfect sport for somebody like him because it is very analytical.

“It is a game where you can kind of plot your way around, and you can think your way around a lot of times better than somebody that pounds the ball. So, I can certainly see where golf would be the perfect game for somebody like him that is very good at making good decisions.”

Most of Liu’s classes are at the Career Center.

“When I get the grades sent to me to where I check kids, I look at his grades and his lowest grade is like a 97 in one of his five AP classes,” King said. “What can I say to a kid like that? You need to spend a little more time in English (King said jokingly). You dropped to a 97.”

That analytical process that Liu, who won’t be 18 until August, goes through started when he was a child, playing in Virginia. His brother, Tony, now 27 years old, played golf at Williams College, an NCAA Division III college in Williamstown, Mass.

“My dad introduced us to the game, but my brother is also very passionate about the sport,” Liu said. “He practiced a lot on his own. And I guess I followed in their footsteps when I grew up.”

Although he started playing golf in Virginia, it was his next stop that changed things for Liu.

“I really grew my love for the sport in Florida,” he said. “In Florida, the weather is good all the year. The area I lived, there were a lot of nice, cheap public courses that I had easy access to and was able to practice a lot. I had a lot of good opportunities down in Florida.”

The access Liu had to golf was beneficial to the growth of his game, even in middle-school, giving him the freedom that it gives him to be creative and make his own shots.

“There was a local tour in Gainesville called the Gainesville Junior Tour and I, over the summer, I played in those events,” he said. “And then when I moved up here, I changed to the TYGA (Tarheel Youth Golf Association).

While in Florida, he played as a freshman as the No. 1 seed at Gainesville High School.

“The one season I was there we made it to regionals that year,” Liu said.

Following that season, Liu and his family moved to the Clemmons area. He enrolled at West that summer. As the boys golf season started, under former Coach Jimmy McMullen, in 2020, it hit an abrupt halt because of the pandemic.

“It was really disappointing. The golf season here is in the spring, and that’s when COVID hit,” he said. “So, I think we maybe played two or three matches and then the season got completely canceled. I don’t think we got to play the first conference match that spring season.

“It was very disappointing with me moving here, looking forward to golf, and they canceled it.”

Other than not being able to play with his teammates, Liu doesn’t feel like losing most of his sophomore season to COVID-19 stunted his growth as a golfer.

“It wasn’t terrible because the TYGA was still offering events all throughout the year,” he said. “I was still able to play in events.”

There was some uncertainty when the 2020-21 school year started as to whether would be any sports played at all, let alone golf in the spring because of COVID-19. However, there was a shortened season last year, just with a different coach.

“I didn’t really know much (about King),” Liu said. “I remember right before the season started my junior year that Coach McMullen said he wouldn’t be returning, and our new coach would be Coach King. So, I was a little bit apprehensive, but Coach King knew the direction for the team. I think it was fine, as well.”

King’s first impressions of Liu haven’t changed his since the start of last season where West Forsyth finished second in the NCHSAA Class 4-A regional but missed the state championship because of COVID-19 restrictions.

Liu, according to King, played well last season, but for whatever reason, has struggled this season.

“Last year, he was super, super consistent,” King said. “And I don’t think, just from what I’ve seen of him, I don’t think he’s super-flashy. I don’t think he does anything just great. He doesn’t hit it super-long, but he does everything pretty well. He’s just so consistent.”

Although his stroke average has only gone up about one stroke this season compared to last, Liu agrees with King’s assessment.

“Right now, I’ve been in a slump in my game,” Liu said. “…Sometimes golf is a weird game. I think it’s more of a mental thing. Not being in that same sort of comfortable state that I have been in.”

Things could be turning around for Liu and West Forsyth’s top golfer, Mason Beshears.

“The last match we played, he played better,” King said. “So, hopefully he will play a little better, and also my No. 1 (Beshears), he played last year, he has played better the last couple matches. (Beshears) made it to the state championship (finished 48th). Both of them played in the regionals as individuals. And both played well, but Zach got off to a really bad start in the regionals.”

As of Monday, King said the Titans have five matches left in the regular season.

“I felt like we were really close last year and feel like our team has some really strong players,” Liu said. “And I felt like if we keep on doing what we were doing we could, this season, potentially have a great reward.”

King sees plenty of potential in his players as well.

“I’ve got four kids that all have a chance to make it (state tournament) as individuals,” King said. “I think Mason and Jack McCarthy, he’s probably been our best player this year, and he played No. 3 last year. Daniel Stamey has been right there until the last match. All of them have played really well, and all of them have had matches where they just need to throw them away.”

No matter how the golf season will finish for Liu and the Titans, graduation is a little over two months away. Although he hasn’t officially made a college choice yet, Liu said he’s deciding between North Carolina, Wesleyan or Emory. He’s thought about playing golf at Wesleyan and Emory, and he’s even thought about playing club golf if he elects to go to North Carolina.

“At least for Wesleyan and Emory I feel like I can contribute a lot to their golf team,” Liu said. “I didn’t try specifically to get recruited, but I think I could walk on, and I definitely think I could make an impact on the team. But I guess UNC, it’s close to home.”

There’s still one thing that is always at the forefront of Liu’s mind.

“Education is the main thing, but I don’t plan on giving up golf anytime soon,” he said. “Playing on the school team or club golf, I definitely want to keep golf in my life.”

While in college, Liu wants to pursue a degree that involves analytics.

“I feel like I want to study computer science or math,” he said. “I guess we’ll see what that leads to later. I don’t have a clear idea of what I want to do.”

All of Liu’s success in the classroom and the golf course goes back to dual cultures Liu has seen as a first-generation American, whose parents came from China.

“There’s definitely two sides,” he said. “Growing up in America, I had that sort of American culture engrained into me, but also my parents engrained the Chinese culture into me, as well. So, just sort of seeing that line, and the differences, but also where they cross paths and how they’re similar has been a really good experience.”