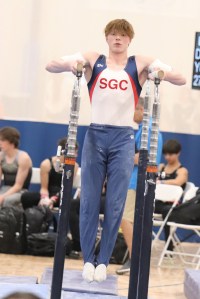 submitted photo
Treyce Warner, a senior at West Forsyth who competes for Salem Gymnastics, will compete in the national championships in Arizona next month. 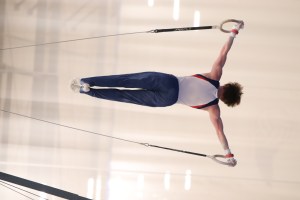 submitted photo
Treyce Warner gets inverted on the rings during a recent competition.

West Forsyth senior Treyce Warner is a top notch athlete nationwide, yet has never participated in school sports. He spends most of his time in the Salem Gymnastics gym, and his hard work has paid off.

Warner qualified for the Elite National gymnastics championships last weekend. He will compete in Arizona on May 14 for the Men’s National Championship.

Warner has a long history with gymnastics, and it seemed to be his calling from a young age.

“I was around 3 or 4 years old, and I was crazy hyperactive, crazy ADHD. My sister was doing gymnastics at Salem, and I would always be running around the lobby, and one of the coaches came up to my mom and asked, ‘don’t you want to just put him in a class or something?’ It turned out I was actually decent,” Warner said.

It wasn’t until high school when he truly realized his potential.

“I didn’t realize I was good until I was around 14 or 15 honestly because I never really put the work in that I needed to. I always knew that I had a better grasp on it than a lot of other guys on the team, but I just didn’t care that much,” Warner said.

Not long after missing nationals his freshman year, he decided to make some changes in his approach.

“I came into practice one day and I thought, ‘You know what, I’m actually going to give this a shot. I’m going to put the time and effort into what I need to do, like listen to my coaches closely, and follow every word they say; that’s when I was like ‘oh here’s the progress,’” he said.

Warner quickly saw results, competing as a member of the North Carolina Elite Team as a sophomore. Only the top three scores per event count towards the team.

“As a sophomore, I put in two scores when I was competing against seniors who had collegiate scholarships. I would say that’s probably my biggest accomplishment, and then making Arizona Nationals this year,” Warner said.

High school gymnasts typically participate in every event, and don’t specialize until college. Warner claims his best event is pommel horse, but his favorite is floor or parallel bars.

“They have the perfect balance of skills being just scary enough to give you an adrenaline rush, but not so scary to where you’re about to pee yourself, like high bar,” he said.

Warner spends a total of at least 19 hours per week training, including three-hour practices on weekdays, four-hour practices on Saturdays, and occasionally coming in on Sundays. There is ample time for team bonding.

“I’m glad I have such a good relationship with my coaches and all my team members because I feel like if I had to spend three hours a day around people I didn’t really like, I would’ve quit long ago,” Warner said.

He especially credits his coach Chris Young for mentoring him in gymnastics, but also life in general.

“He’s Olympic Trials made, World Championship type stuff, so he obviously knows what he’s talking about when it comes to gymnastics, but just in general I know that I could approach him with any problem that I have,” Warner said.

“He just gives sound advice. I remember one time he gave me a motto that I still live by now. He pulled me aside at practice…And he said, ‘I don’t know what’s happening, but can you do something about it?’ I said no, and he said, ‘Then why are you worrying about it? Do what you can about a problem…and if you’ve done all you can do to fix it, then just let it go as best you can. Don’t be mad at yourself for giving everything you have.’ That’s really helped me through a lot of tough times,” Warner said.

Like many athletes, Warner has dealt with more than his fair share of injuries, which have been tough physically and emotionally.

“I discovered that I had hip inflammation early October (2020) from all the landings that I’ve taken…that was the start of an eight or nine month injury reserve. It went from that to a broken ankle, I blew out my knee, and then I cracked some ribs the week I got back. Those healed up and then I discovered I had a massive wrist problem so it was just back to back to back to back,” Warner said.

“That was definitely the toughest thing I’ve experienced with gymnastics, but I pushed through it, worked over the summer, started weightlifting to stay in shape while I was hurt, and put the work in, and made it back.”

Warner is still debating whether he wants to continue gymnastics in college, between the unrelenting impact on his body and the lack of available scholarships for men’s gymnastics. More than 75 Division I men’s college gymnastics programs have been cut since the pandemic began because of budget deficits and concerns about complying with Title IX. Nonetheless, he has been offered a roster spot from Temple University where some of his former teammates compete. Whether he decides to further his gymnastics career, or not, Warner hopes that the sport stays alive and continues to be a unique outlet for many future athletes.

“Everybody at meets is always supportive, cheering other teams on,” Warner said. “It’s been one of the best environments I think I could’ve been in. I really hope that other people get to experience that as years go by and that it doesn’t just die out in America.”

Janie Peterson is sports editor of the West Forsyth Zephyr.