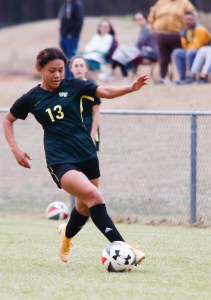 Brad Richard photo
West Forsyth’s Rosa Noyola-Gonzalez settles a ball during a recent game for the Titans. West is unbeaten in CPC play and tied with East Forsyth atop the league standings at 5-0. The two teams will meet on Tuesday at West at 6 p.m.

The Titans continue to roll along in the Central Piedmont 4-A Conference after posting two more wins last week as part of their recent six-game winning streak.

On Thursday, the Titans lost a nail-biter at Lake Norman, 4-3, to fall to 7-4-1 overall. It was their first loss in more than three weeks.

West is tied with East Forsyth in the CPC with identical 5-0 records. The Titans and Eagles will meet each other in the first game back from spring break next Tuesday at West. Kickoff is scheduled for 6 p.m.

The boys tennis team continues to roll through the season, improving to 9-0 after a win against East Forsyth last week to close out the regular season.

The Central Piedmont 4-A Conference tournament will take place starting on April 20 and will be played at West.

The girls lacrosse team ran their winning streak to 14 straight after posting a 15-3 win against Davie last Friday, improving to 14-0 overall and 9-0 in conference play.

Alvia Gurley has scored 37 goal through 14 games to lead West and also has eight assists. Leah Meyers has scored 34 goals and delivered 17 assists, which leads the team.

The Titans will have three games when they come back from Spring Break next week. They will play at Reynolds next Tuesday, at Glenn next Wednesday and at East Forsyth on Friday.

The Titans’ softball team went into Spring Break on quite a hot streak after posting three shutout wins last week in impressive fashion. West now has eight shutouts in 13 wins this season.

West swept a double header against Parkland last Monday by identical 16-0 scores, then downed Glenn 14-0 last Friday night. The Titans improved to 13-4 overall and 8-3 in the Central Piedmont 4-A Conference and will resume their schedule on April 19 with a conference game at Reagan.

After splitting the series against Davie County last week to roll into Spring Break, West will be in Myrtle Beach, S.C. this week playing in the Cal Ripken tournament.

The Titans got the best of the War Eagles last Wednesday, winning 11-3. Friday was a different story, as West was on the losing end of a slugfest, 24-10, at home.

The Titans have games scheduled this week against Liverpool, AMHS from Cincinnati, Ohio and Victor, from New York.

West will resume its conference schedule next Tuesday when it travels to Reynolds.

The Titans are 12-2 overall and 8-2 in the CPC, tied with Reagan for first place.

Boys lacrosse goes into break on a high note

The Titans improved to 8-8 overall and 3-6 in conference play and will have games against Reynolds, Glenn and East Forsyth next week.

Brody McDonald has scored 34 goals to lead the Titans this season, while Ryan MacDonald is second in goals (29) and second in assists (25). Levi Whitener is also having a solid season, posting 20 goals and a team-leading 26 assists through the first 16 games.

Driven: Brooklyn Fox has developed into leader for girls…