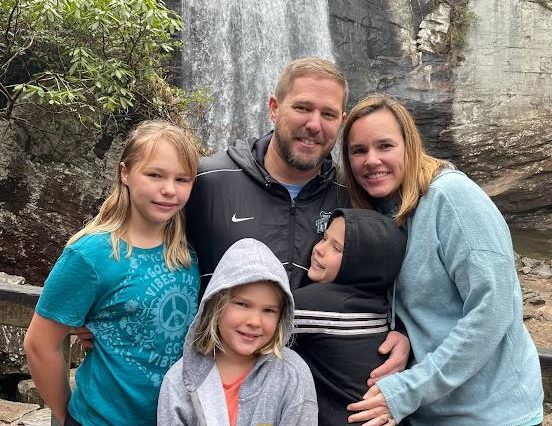 Scott Bilton grew up in a full house with five sisters and one brother in Monroe. His childhood was filled with sports galore, both as a player and an avid fan. “I can’t say that I had a favorite sport growing up because I really enjoyed them all,” Bilton said. “As a kid you are impacted by both your great coaches and the ones that weren’t the best, either. I realized from an early age the kind of bearing they can have.”

Bilton’s skills as a goalkeeper in soccer had been noticed by several colleges. “I had weighed the pros and cons of going to a school where I could play soccer, however, I decided I wanted to be a college student,” Bilton said. “I still remember the day that I got in. It was the same day Carolina played Duke when Jeff Capel hit a half-court shot to go into double overtime. I knew I wanted to experience those moments in person. My dad and I watched that game together and it was memorable.”

Although Bilton wasn’t choosing his college based on where he could play a sport, he did want to consider club sports at the University of North Carolina at Chapel Hill. “The morning that I woke up for tryouts I actually pinched a nerve, so that was the beginning of the end for my collegiate sports experience,” he said. Bilton had also chosen to join the Air Force ROTC program when he decided not to play sports in college. “My thought process included the idea that I would major in math, serve 20 years in the military and then teach and coach after I got out,” explains Bilton. “After one year in college, I re-evaluated my decision to stay in the Air Force ROTC because I was deemed non-combat effective due to my knee. The medical staff was worried that my knee might give out eventually (and they were right).”

Bilton found other interests while at UNC, including the InterVarsity Fellowship ministry. “I enjoyed it so much that I knew that this program was something I would want to do as a volunteer once I graduated from school. I knew that I needed to have a job with hours that would allow me to do that. It felt meaningful helping people and I knew that I wanted to continue it,” he said.

Bilton volunteered for the year after he graduated from UNC in 1999. Simultaneously, Bilton had begun working at a small local bank in the triangle, Centura.

Bilton enjoyed working at Centura while serving in various roles. However, about five years into his career he had a series of injuries and health scares. While playing volleyball, Bilton tore several ligaments in his knee, dislocated his patella and fractured his femur. Just one month later he woke up and realized he was experiencing labored breathing. “I went into work because my new boss had started that day. My co-workers kept telling me to go home because I couldn’t even complete a sentence because I couldn’t breathe. Finally, my new boss said the exact same thing and I went home to rest. Luckily, my roommate, who also ended up becoming a doctor, came home when he did because he found me unconscious. He got me to the hospital where I was told that if it had been 40 minutes later, I would have not likely made it. I had suffered from deep vein thrombosis, where I had several blood clots in the veins in my legs,” Bilton said.

Bilton had also experienced a saddled pulmonary embolism with 90% blockage going to his lungs.

“I stayed in the hospital for five days. All of those health scares were a lot for a 26-year-old,” Bilton said. “I had thought I was a relatively healthy person.”

Bilton had family and friends visit him while he recovered in the hospital. “It was interesting because three different friends brought me the same Carolina Alumni Review edition. In the magazine there was an article about young professionals leaving the corporate world to go into education. I took it as a sign. God can speak to us in different ways, and I figured this was like a 2×4,” Bilton said with a laugh. “I told my boss about my epiphany, and he said it was the dumbest move I would ever make. I never regretted it once.”

Bilton applied for NC TEACH and began down his new career path. “I also was set up with my future wife, Laura, through a mutual friend. Our mutual friend felt so bad for me with my recent health scares that she said she thought it would help cheer me up. Laura and I went out, dated a few months, fell in love, and got married in 2004,” Bilton said. “Ironically, Laura was working at the Centura as well and was re-thinking her career path too. When I explained to her all the signs I had gotten with re-thinking going into teaching, she said she felt the same way.”
Laura decided to jump into the education world too, but first by completing a graduate program.

The Biltons’ first jobs in their new respective careers were in Greenville, South Carolina. Friends of the couple had encouraged them to move there. Bilton got his first job coaching soccer and teaching while there. “After several years, Laura and I knew we were ready to start having a family. We wanted to be closer to her family that lived in Winston-Salem or mine that still lived in Monroe. I had applied for a head soccer coaching position and job teaching social studies at my alma mater, Monroe High School. It was kind of surreal running into a lot of familiar faces including teachers and families that I knew growing up. I had also seen an advertisement for a position at West Forsyth High School. When I came in for the interview, the assistant principal at the time (Rodney Webb) was my assistant principal when I was a student at Monroe Middle and High schools. Once we started talking, something about that situation felt right,” Bilton said. “It was hard telling my former school that I wasn’t going to accept the offer at Monroe High School, but I knew West was the right fit for me.”

Bilton started his career as a head coach for both the girls and boys varsity soccer teams at various times since 2007. He also has had the opportunity to teach social studies. “Once we moved back to the Lewisville area, we also started our family,” Bilton said. Daughters, Hailey (11), Emily (9) and Sydney (6) kept things fun and interesting as Bilton navigated his new roles as dad, coach, and teacher. Bilton also began an expanded role as assistant athletic director a few years later and guided the girls team to the NCHSAA 4-A state championship in 2017.

Embracing his position as a parent, coach and teacher, Bilton also found great fulfillment from Pinedale Christian Church. “The mission focus at our church was evident from the first time we attended. It reminded me a lot of the church we joined in Greenville. I realized again through signs and hints that being able to do a mission trip was important to me. I was excited to be able to participate on a trip to Togo in West Africa. A group of us was tasked with helping support teachers by exposing them to various teaching methods,” Bilton said. “The abundance of material possessions we have compared to these people, it was eye-opening. It was a life lesson of how blessed we truly are and how wasteful we can be.” The inner athlete in Bilton couldn’t resist playing a little soccer and basketball for just two hours while he was on a break with the local kids. “Unfortunately, I got injured and pulled a calf muscle, so I had to rest more than I would have liked during my time there. Because of my blood condition, it made me a little nervous, but luckily when I got it checked out a week later it was fine,” Bilton said. “The positive though was that I got to spend a lot of time with the head minister because I had to be driven to the places we visited. I learned a lot too.”

Bilton has found that following the signs in life has paid off in many ways. “Raising my kids near family, being part of such a great community at West Forsyth, it has really exceeded my expectations,” Bilton said. “It’s hard to explain to people in education what it’s like to receive the amount of support from the athletic director, administration, and parents. The West Forsyth sense of community, steeped in tradition, and family centered atmosphere is what makes this place like no other. I am lucky to be a part of it and have enjoyed my journey.”