Breaking the mold: Ethan White combines love for track, welding into his formula for success 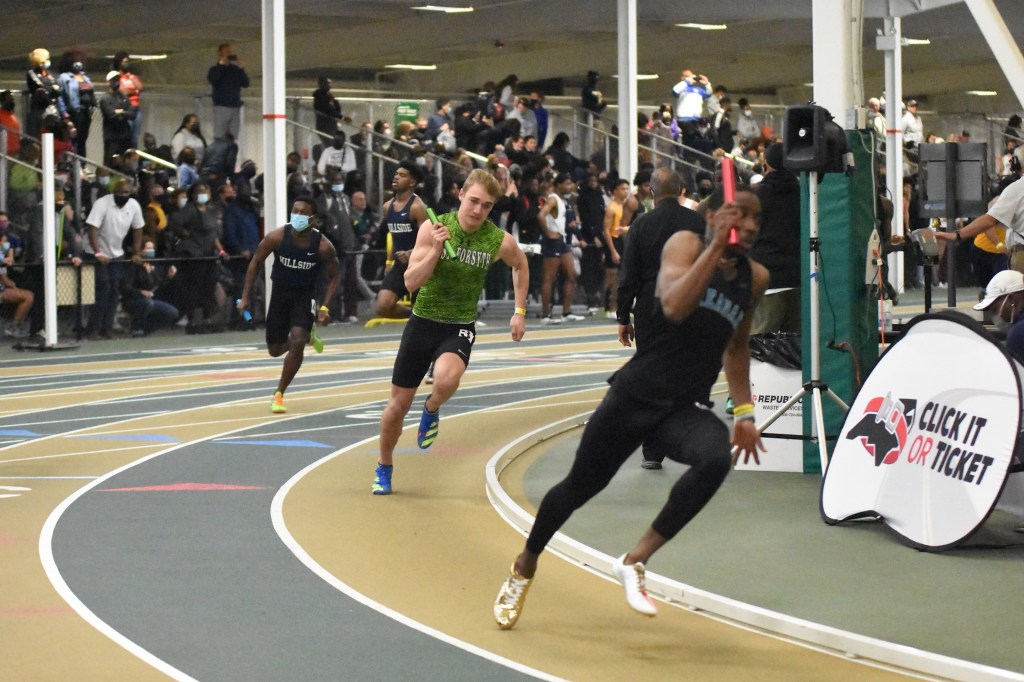 Gunnar Douglass photo West Forsyth's Ethan White hits the curve during his leg of a relay during indoor track season.

The foundation of a team is often melded together. That can also be said for Ethan White of the West Forsyth boys track-and-field team.

White, a junior hurdler and long-jumper for the Titans, is taking welding at Forsyth Tech with the prospects of becoming a full-time welder.

White’s specialty is mobile repair and landscaping for a grading project while working for BH Enterprise & Landscaping, Inc. in Clemmons. He even worked all week last week during spring break.

“I had some friends that were doing it,” White said. “I’ve never really liked the white-collar type of stuff. So, I’ve always just tried to get into as much blue-collar stuff as I can.”

While he loves his position at BH Enterprise & Landscaping, Inc., he has bigger aspirations.

“I want to start working for someone, and then hopefully own my own shop at some point,” White said.

Welding came about some years back, but his love for it has only gotten stronger.

“It’s something that I always thought was interesting,” White said. “And then when I heard that I would actually be able to do it I took a few classes last year just to see if I would like it. I loved it.”

Trade school isn’t the traditional route for most high-school students, but that’s just fine with White.

“College probably isn’t the best thing for me,” he said. “…I’m not a bad student at all, but I’ve never liked sitting in a classroom listening to someone talk.”

White has a 3.0 GPA but added that he has a short attention span.

“I can’t focus all that well in school,” he said. “I’ll do all my work and I’ll get good grades, but I’m just not the biggest fan of it.”

He had to get his counselors at West Forsyth and Forsyth Tech to come up with a conducive schedule so it wouldn’t conflict with his studies or his time on the West track-and-field team.

“I think he pretty much works sun-up to sun-down whenever he’s not in school.”

Being fully immersed in something he enjoys has translated on the track for the Titans.

“So, I think that it has kind of aligned or coincided with him having some success with his approach to what he’s doing. Again, it kind of all makes sense. I’m not surprised he’s done as well as he has.”

On an average school day, White is at Forsyth Tech from 7 a.m.-11 a.m., leaves to go to West Forsyth from noon-4 p.m., and after school he has track practice.

“Any individual, part of life and growing up and being successful is realizing what your strengths are, and maybe what your weaknesses are, and capitalizing as much as you can on your strengths,” Newsome said. “So, I think for him that self-awareness and decision to focus on those things that hold his attention is probably just a wise move.

“Whether I’m a coach, a parent, or whatever, that’s probably something you want to encourage them to do.”

While only 17 years old, White even has already thought ahead by doing the landscaping job he’s doing now.

“Right now, I’m only doing landscaping because it’s harder to get a welding job until you’re 18,” he said. “So, I’m doing this right now because I can still do hands-on stuff. Another thing with me is that I love being able to do a job and being able to see immediately what I was able to do, and how it turned out, and how it looks.”

When he turns 18, his job skills will increase incrementally.

“You can’t weld on as many things if you’re not certified,” White said. “And when I complete Forsyth Tech I’ll be certified, so then I’ll be able to go out and get a job, and be able to work in a welding shop every day.”

White is on track to graduate from Forsyth Tech in 2024, one year after graduating from West Forsyth.

“When I graduate high school, I’ll probably start looking for more welding jobs,” he said. “Then I can at least get into a shop and get the feel of what’s going on, whether it’s doing a shop clean-up or just doing really whatever.”

As for White’s prowess on the track for the Titans, he’s also part of a foundation of family members who are track athletes. His sister, Taylar, runs cross-country, indoor and outdoor track-and-field as a senior at West. And his mother, Keena, is the jump coach at West, which means she’s his coach in the long jump.

“I’ve actually never had a problem with track,” White said of his focus on the sport. “I’ve always loved track. And I think in sixth grade my sister started doing it. I was like, ‘I want to start doing that.’ So, I tried long jump and I was able to do alright in it. So, then I said, ‘Maybe I’ll try this again.’ So, I kept going back year after year.”

The familiar bond the Whites have doesn’t affect the dynamic between athlete and coach.

“You wouldn’t know,” Newsome said. “Kind of the same way I do with my kids — when you’re in school, you’re just coach. You try your best not to be mom or dad. And I think it’s convenient when it needs to be convenient. And at least thus far it hasn’t been problematic. You separate yourself from it the best that you can. I think by in large it’s been a plus.”

According to White, he and Taylar are the same on and off the track. For him, it doesn’t matter that she’s a year ahead of him and will be attending Charleston Southern in the fall.

“We’ll cheer for each other when we’re doing something,” he said. “And it’s nice because we’re not doing the same thing. She’s a distance person. I’m a hurdler and jumper. So, we’re different enough that we can have our own thing, but at the same time we’re still there at the same place and on the same team.”

It’s pretty much the same between dynamic between mother and son when Keena White gets to coach Ethan.

“We all do our thing,” Ethan said. “We don’t have any problems with each other. So, we all enjoy it.”

One twist in his long-jumping is competing against junior Tyson Adams of West Forsyth, who won the NCHSAA Class 4-A indoor long-jump championship in February. However, White was no slouch. Adams won with jump of 23-1, and White finished 10th at 20-5.75.

“One thing that’s kind of stressful is last year I ended up, for long jump, I ended up being (Central Piedmont 4-A) champ,” White said. “So, I know that I’m not going to be able to finish that up this year because I’m competing with one of the top in the country right now (Adams), but he’s on my team.

“So, I know that I won’t be able to follow that up, but still I want to work and at least get better than what I did last year.”

Competition with Adams has made White better.

“He’s my teammate,” White said. “I want him to do well. And it hasn’t been as hard on me because I’ve been able to really well in hurdles this year. That’s been able to take a lot of it off of me — that I’ve been able to excel in something else other than just one event.”

This spring, White is competing in the 110 hurdles, the 300 hurdles and the long jump for the Titans.

“Long jump, from kind of an early age, it was kind of noticeable that I could jump kind of well,” he said. “…So, that’s always been something that I’ve enjoyed doing. And then hurdles, one time in practice, I was joking around and went and jumped over a hurdle, and the hurdle coach (Chuck Lott) grabbed me and he said, ‘Actually, that wasn’t bad at all.'”

His thoughts on hurdles have changed over the years.

“I got stuck in hurdles,” Ethan said. “At the beginning I did not like it at all, but now I’ve really grown to like it.”

“He does well, especially with the shorter hurdles,” Newsome said. “He’s probably one of the top five hurdlers in school history. Our conference is a pretty tough one to hurdle in.

“I think he’s done really well with the short hurdles. I think longer hurdles probably could fit his speed a bit more, but 300 meters is a different animal to train for than the 110s. So, I think in time as he becomes more fit, if he decides, as we’ve mentioned before, Ethan is pretty intrinsically motivated.

“When he decides he really wants to do something, I think he does really well. Until he makes that decision. the opportunities still exist, I guess is a good way of saying it.”

“I expect we’ll have a good number out of the region,” Newsome said. “Now advancing out of the region will be a monster because that realignment we’ve got Weddington, (Waxhaw) Cuthbertson, and everybody and their brother.”

Once track-and-field season is over in May, White will stay in his daily routine of work and school before school ends in June. And there is a chance that welding would keep him away from track and field next year.

“If he chooses to come back and do it, and to do well and excel in it, I think he could do a great job,” Newsome said. “And not to sound like a broken record, that’s if Ethan chooses to do that.”

And although graduation at West for White is about 14 months away, White has many decisions to make.

“I don’t really know many other athletes that are on the same track,” he said. “But I wouldn’t really change any of this for anything because I want to do what I love, and this is what I love.”