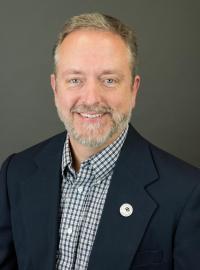 Mayor says town manager did ‘exemplary job’ in his 10 years

It wasn’t part of the agenda for last Thursday night’s Lewisville Town Council meeting, but the biggest news in a three-hour session came near the end when Mayor Mike Horn announced that Town Manager Hank Perkins will be leaving his position late next month.

“Our manager, after 10 years of doing an exemplary job and guiding us through a very exciting time in the town’s growth, has decided he wants to take a job up in Lake Lure,” Horn said.

“So there’s a lot of work to do between now and then to make sure we have a good transition.”

The last day for Perkins in Lewisville will be May 27. He will start his new position in Lake Lure, a town with 1,400 year-round residents, the first week of June — just in time for the extra thousands that come during tourist season.

Why leave Lewisville for Lake Lure?

“I guess the most succinctly I can tell you, it’s just an opportunity that I saw and was interested in,” Perkins said. “A lot of that has to do with Lake Lure as a place in the foothills and mountains that appeals to me. That’s about it.”

Perkins, who received his bachelor’s degree from Appalachian State and his master’s degree in public administration from N.C. Central, came to Lewisville in July 2012 to replace Cecil Wood after spending the previous decade as town manager just up U.S. 421 in North Wilkesboro.

So now at age 54, is another 10-year tenure as a town manager in the master plan for Perkins?

“I could be working for at least that long,” he said. “It will be a while before I’m calling it quits.”

Perkins, an avid walker and hiker, will be going to an area that fits that lifestyle. Over the years during vacations, he has hiked segments of the 2,190-mile Appalachian Trail from south to north, and is now positioned at the base of Mount Washington in New Hampshire for his next outing —some 300 miles or so from the finish line.

Perkins said that he thought Lewisville “has evolved a lot in the last 10 years. We’ve become a place where we have some solid development guidelines, and we’re growing this community.”

He cited the various transportation projects (including the roundabouts at Shallowford Road and Williams Road, the sidewalks on Lewisville-Vienna Road and the Great Wagon Road) as things he’s been happy to help coordinate along with the Mary Alice Warren Community Center and the Parks and Recreation Master Plan most lately and the City/County Utility Commission services agreement early on.

Perkins added he was glad to be a part of the continuing Gateway project and “would have liked to have seen bids and be under construction before I left, but that’s not going to happen because we haven’t gotten any bids.”

During the meeting, Perkins said that for a fourth time, Lewisville was shut out in getting bids from contractors for a project that continues to be delayed.

“I think there’s a lot of work out there and people are able to get private neighborhoods and shopping center jobs, and it’s just not government work, so it doesn’t come with all the red tape the government jobs do,” he said. “I’m looking to come up with a similar type of project and then pair the two to kind of grow some mass to it. We’ll see how it goes.”

Horn said that Lewisville was fortunate to have had Perkins at the helm for a decade.

“During this time, we have seen solid, well-planned growth in Lewisville and a number of important public projects take place, most significantly is the Mary Alice Warren Community Center,” Horn said. “In addition to these accomplishments, Hank has built a town staff that is highly competent, professional and understands the vision of our community and the importance of providing extraordinary services to our residents. Over the years, we have developed an exceptional working and personal relationship.”

Horn said he would like the town to use the Piedmont Triad Regional Council to handle the recruitment for a manager — which was the case in 2012 when Perkins was selected from 74 applications.

Horn said he has been told the supply of qualified managers “is very difficult now,” and he offered that rather than consider an interim manager, perhaps a member of the current staff could serve in that capacity until a permanent manager is found.

“When we’ve had an interim manager in the past, it’s really been a chair filler,” Horn said. “The staff was still continuing to do all the work, and we were paying a pretty good salary for somebody to sit in that chair. I don’t think we’ve ever been in the position like we are today where we have the level of competence among our staff that we do.”

More discussion with the council on the process will be upcoming to gain consensus on how to proceed without Perkins, who led the first budget meeting for fiscal year 2022-23 on Monday and will guide the board through the budget deliberations in May prior to it being adopted in June — when he will be in his new job in Lake Lure.

In the meantime, Horn used a scouting pledge used when camping to describe the departure of Perkins: “Leave your campsite better than it was before you arrived. Lewisville is certainly a better place because of Hank’s leadership. I know the residents of Lewisville wish him the best.”