Bloodlines in the sand: Lamoureux brothers are a formidable duo on the sand volleyball court for Titans 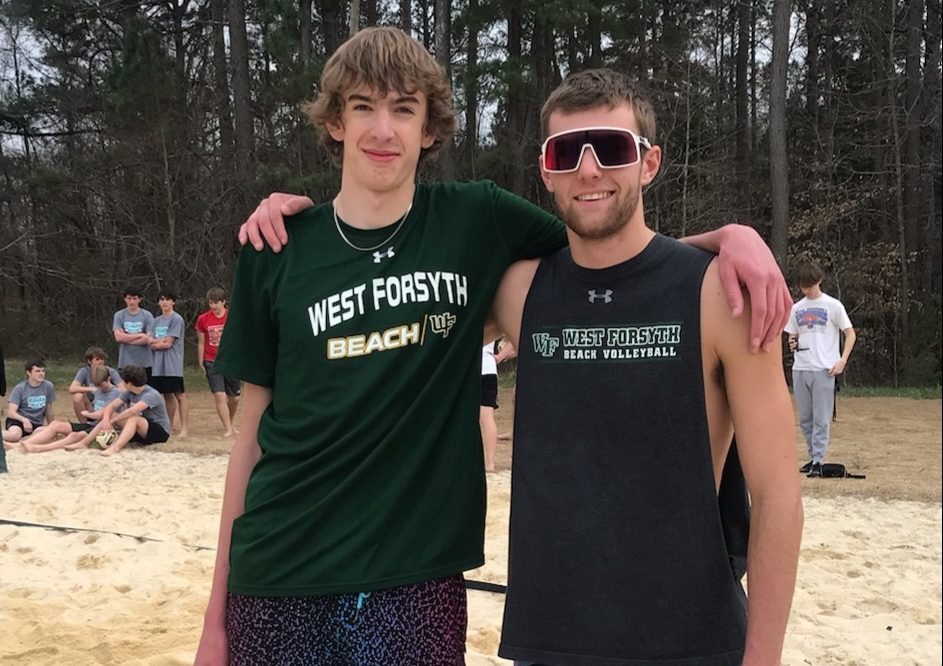 submitted photo Brothers Grant (left), a freshman, and Zach Lamoureux, a senior, are a formidable duo on the sand volleyball courts for West Forsyth

Maybe it was destiny that Zach Lamoureux, a senior at West Forsyth, would end up spending an abundance of his time on a sand volleyball court.

And it wouldn’t be far-fetched that Zach’s “little” brother, Grant, a freshman, who at 6 feet, 8 inches is several inches taller than his big brother, would end up doing the same.

After all, it is Zach who has a photo with Kerri Walsh Jennings, a three-time gold medalist in the Olympics and one of the most successful beach volleyball players of all time.

“I think I was about two when we got the picture with her in Atlanta,” Zach Lamoureux said. “But yeah, there is a picture of her holding me. That’s pretty cool.”

And it was also Zach who started “messing around” with a volleyball at his house in his younger days, which led to him playing a lot on the sand volleyball courts at his neighborhood pool at Clemmons West.

“There was always a ball around our house, and I would sometimes just pick it up and starting playing with it,” Zach said.

Zach and Grant’s mother, Michelle, played volleyball in college at Virginia Tech. That’s another obvious connection to the sport.

But with no official high school volleyball programs for boys in North Carolina, there is limited access to the game.

Both Zach and Grant played volleyball in middle school — Zach at Hanes and Grant at Clemmons Middle — but that was indoors. They have also since joined club teams for the Twin City Volleyball Academy that operates out of RISE Indoor Sports.

And sand volleyball has taken off across the state since its inception and introduction at the high school level as a club sport in 2013. Though it is not sanctioned by the North Carolina High School Athletic Association, there is an organizing body that recognizes a state champion every year in girls and boys competition — the North Carolina High School Sand Volleyball Association.

“We’ve had some pretty good success with it since it started,” said Lauren Gillon, who coaches the sand volleyball team and the girls volleyball team at West. “Zach and Hayden Lichty finished second in the state last year and we have also had two boy’s teams who won state championships in back-to-back years.”

Tommy Vo and Santiago Mendoza captured the title in 2016 and then Tommy Criss and Andrew Cecil were victorious the following year in 2017.

Clara LaRue and Kayla Kozak advanced to the semifinals at last year’s state tournament before losing to the eventual state champions.

“We’ve had a lot of interest since we started and we are lucky enough to have two courts here at school we can use,” Gillon said. “And Zach has been a part of the program for four years and I’ve really seen him grow up through the game. His development has been evident since his freshman year. He has the drive and commitment to succeed and it’s really neat that he has his brother out here with him this year, though they don’t always play together.”

That’s right. Zach and Grant are still brothers. And they are still prone to have those brotherly squabbles every now and then.

“Well, when we played in an event for the first time at Myrtle Beach over the summer, it didn’t go so well,” Grant said with a laugh.

We did a lot of bickering back and forth. We’ve gotten better about a lot of that now and won our first three matches together so far this spring.” 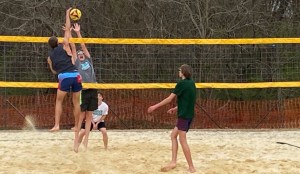 submitted photo
Zach Lamoureux rises high above for the kill shot during a recent match.

Zach said that he recognized the talent that his younger brother had and was trying to bring out the best of him.

“I see how good he is capable of being and I also realized that he has a chance to be even better than I am if he sticks with it,” Zach said. “And I figure since this is the only year he and I can play together at school; I want to try and make my senior year extra special and play as much with him as I can.”

Both brothers have tried other sports to no avail. Zach got bored with soccer and learned that basketball wasn’t really his thing, either.

“I got tired of being made fun of because I couldn’t make a lay-up,” Zach quipped. “My freshman year, I decided that I was just going to focus on volleyball. And about midway through last year was when I realized I could be really good at it. I really focused on improving my game in all areas and concentrated my workouts on that. My vertical jump improved eight inches over the summer, to the point where a lot of my club teammates noticed and said, ‘Zach, what have you been doing?’

Zach also said that watching his father, David, tear the same anterior-cruciate ligament (ACL) three times in a span of a two years in the same knee while playing basketball, also influenced his decision to stop playing the game.

Grant loved to play basketball in middle school, but his career was cut short when COVID struck.

“Our season ended abruptly in eighth grade, and I just haven’t really gone back to it,” he said, then added with a hearty chuckle, “I also played lacrosse for a few years and really enjoyed it, but I’m pretty fragile and skinnier than everyone else and I didn’t think it would be the best idea to keep going. And I had started playing sand (volleyball) by then and just found it to be more fun.”

Gillon said both brothers have plenty to offer to each other and to their teammates. Gillon also asked Zach to be one of the managers for her girls team last fall.

“He understands the game and I thought he would benefit from being around it and learning as much as he could,” Gillon said. “And he did a great job.”

Zach said he picked up plenty of nuances from watching that have helped him continue to develop his game.

“You see the way they communicate, and you can really read what they are doing on the court, where they are going and how they set everything up,” Zach said. “It was a great experience.”

The brothers are still complimentary about each other’s games and skills. It didn’t take much provoking for them to effuse praise on the other.

“Hitting and blocking for sure,” Grant said, mentioning his brother’s best assets on the court. “And his experience is definitely a plus. He’s learned a lot about the game and has passed some of that on to me as best he can.”

“He can really get up there and swing over anyone’s block,” Zach said. “He’s also really good at reading where the ball is going and has great perception of what is going on during a match.” 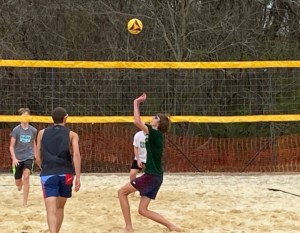 Though the two haven’t made the full switch to playing with each other — Grant is still part of the No. 2 team along with Jack Thompson — they hope they see more action together as the season begins to wind down.

“Especially now that we’ve figured out how to play together,” Grant said with a laugh.

Zach has plans to play club volleyball at Liberty University and concentrate on playing some AVP events on weekends.

“Since it’s a club sport at Liberty, there aren’t any NCAA guidelines I really have to worry about,” Zach said. “They have a great program, a great coach, great facilities and a sand program and I just fell in love with it when I went to visit.”

Grant is also interested in playing in college but knows he has a long way to go.

“I need to increase my jumping ability,” Grant said. “And I think with everything I’m doing between playing indoor and on the sand, that will start to happen.”

And as much time as they spend on the courts, whether that’s together on the sand or separate indoors for their respective club teams, when they do get the chance to play together, they take advantage of the opportunity.

“When we’re out there on the sand together, there’s just two of us,” Zach said. “You definitely have to have more trust in your partner because of all the space you have to cover. If you have that close connection with your partner, it’s almost instinctual that you know what to do because you know each other so well.”