Gentle Giant: Parker Henson stands out on and off the lacrosse field 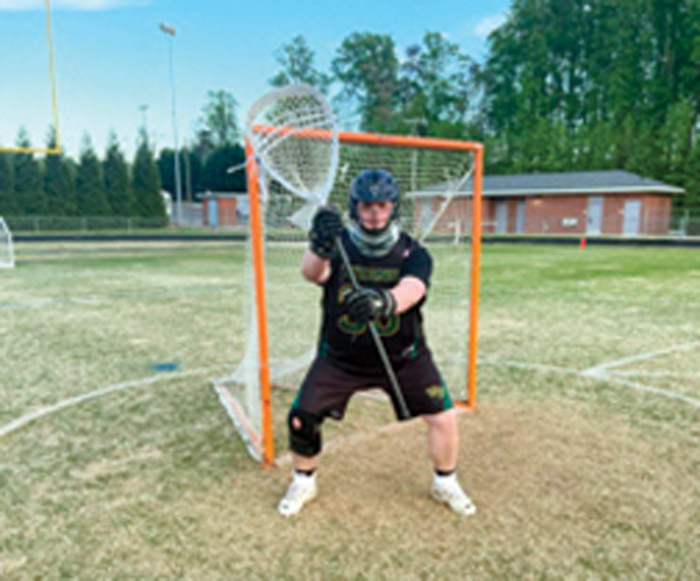 Parker Henson is a gentle giant on the lacrosse field for West Forsyth. But what lacrosse has meant to him and his family that’s the most important thing.

Henson, who is 6-foot-1, and according to him, 290 pounds, is in rarified air as the larger-than-life goaltender for the Titans’ boys lacrosse team. He’s also well-mannered and will give you all he has. However, his strength, as well as the strength of his family, has been pushed to the limits in the last 13 1/2 months.

“I played football here at West from my freshman to junior year. Towards the end of my junior year, my little brother was diagnosed with cancer.

“Football is a huge commitment, especially at West Forsyth because the program is super-serious and they produce college-level athletes, such as K.J. Henry (at Clemson) and Jared Wilson (at Georgia), and many others. So, it was a huge commitment. It took up a lot of time. It was a very early stage of the cancer where you don’t know how it’s going to go. So, I decided to leave (football), so I could spend more time with him.”

In Cooper’s case, the cancer was in his left knee. So, Cooper, Parker, and their parents, Jonathan and Heidi, and their elder brother, Tyler, who played soccer and lacrosse at West Forsyth, and is now a junior at N.C. State, have all been together through the process.
“Usually, you don’t see the tumor grow,” Parker said. “His knee got really big and we thought it was something with his muscle. Nothing too serious. But we took him to the clinic and they said, ‘You’re not leaving here without X-rays.’

“They caught it pretty early.”

The tumor was on Cooper’s kneecap.

“He had surgery. He had the tumor removed,” Parker said. “He had part of his femur removed through his shin and his whole kneecap taken out.”

After the removal of some bones and chemotherapy Cooper was cleared about two months ago, according to Parker.

“He can’t do as much as he could, obviously, but he can still walk,” Parker said. “He still has his leg.”

Despite some limitations, the prognosis for Cooper looks good.

“He’s been really strong through it all,” Parker said of Cooper. “It’s crazy how strong he’s been, how much he leans on God. He puts everything in his hands. And he’s been a trouper through it all.”

Community has been a big help for the Hensons — both friends and family, as well as teammates, parents and coaches on the lacrosse team.

Lacrosse is fun for Parker, but it’s also been a refuge. He’s also dual-enrolled at West Forsyth and Forsyth Tech. At Forsyth Tech, he’s taking business law, quantitative literacy, and writing and inquiry.

“It’s really been a place to kind of get away from everything,” he said. “Of course, all my teammates know about it, my coaches know about it. They’re really supportive and they’re good to be around.”

Jacob Able is the new boys lacrosse at West Forsyth. Able, who is from Roswell, Ga., played college lacrosse at North Greenville University, and just graduated in December after his fiance’ moved here for grad school at Wake Forest. Able wasn’t installed as the head coach at West until January. He teaches at Kernersville Middle School and coaches at West Forsyth, meaning, he drives about 50 miles a day to get back and forth.

Able replaced Jake Burcaw, so the team didn’t have workouts until just before practice started in February.

Able knew nothing about Parker Henson as a goaltender, let alone what Henson’s family was going through until after the season started.

“I didn’t know about that until I think (two weeks ago),” Able said. “(Parker) mentioned something early in the season about how he had to go somewhere because of his brother or something. And I didn’t think it was my place to ask him about that. I didn’t want to invade his privacy. So, I just left it there.”

Despite only knowing Henson since February, Able is amazed at how Henson compartmentalizes things.

The only negative for Able is that Henson will be finishing his lacrosse career at West Forsyth soon, as Henson will graduate in June.
“I’m kind of upset that he’s (leaving),” Able said. “You couldn’t ask for a better captain. I had all the guys vote for captains this year. He got the most votes by 10 votes. I mean he’s just exactly the kind of person and goalie that you want to have.”

“Then I came out, it was the first week that I moved here, as soon as the dead period (for workouts) was over, I got the guys out there just to play around,” Able said. “I brought my stuff out to play with them, to mess around, have fun, a little scrimmage-type thing.
“That was first time I really got a look at Parker. I think I was definitely relieved after that.”

Before that workout the only footage Able had seen of West Forsyth after being named head coach was video he had seen of the team playing against Reagan last year.

“But Parker didn’t play in that game. I just saw him on the sideline, and I was like, ‘Oh, man, there’s our goalie. He’s a big boy.’

“Our second game of the season, I think he had 17 saves against Mount Tabor. We lost that game (8-7) in overtime, but he was a huge part of the reason we were even in that game, the way he played. He’s been a great leader for us this year.”

West Forsyth finished the regular season 10-9 overall and 5-7 in the Central Piedmont 4-A, good for fourth place. The conference tournament started Monday night, and West Forsyth played host to No. 5 Davie County. The winner of that game played top-seed Reynolds (14-3 overall, 12-0 CPC 4-A) in a semifinal Tuesday night at Glenn.

Through 19 games, Henson has been impressive for the Titans between the pipes. According to MaxPreps.com, Henson played 118 minutes as goaltender through the first 16 games. He saved 89 of the 207 shots he faced through the first 16 games. After losing 14-4 at home to Reynolds on April 19, West Forsyth rebounded to win the last two games of the regular season — 9-1 last Thursday at Glenn and 14-8 last Friday at East Forsyth.

“It helps me be a better ball-stopper,” Henson said of his size. “(Other goalkeepers) can get down low pretty fast. They’ve got quick hands. And they’re better to make the more flexible saves than I can. But it’s just two different styles of playing goal. It doesn’t mean you’re better than I am.”

The Titans also outscored their opponents 198-148.

“Parker’s taking up the whole goal, so if they if they want to score (you have to defend the angles),” Able said.

No matter how the Titans fare this week in the conference tournament, or if they received a berth in the NCHSAA Class 4-A tournament, which will be announced on Friday, lacrosse is growing at West Forsyth. Even though West Forsyth has 11 seniors on the boys team, the Titans have the building blocks for a successful program.

“We’ve built this connection between us, between all 11 of us,” Henson said. “We’ve been kind of thrown together like thick and thin. So, we’ve got really good team chemistry. And that’s kind of what helped us get ready for the season so quickly.”

Able, who isn’t much older than the Titans’ players, has also built a connection.

“He’s very into the details,” Henson said of his head coach. “And he’s not afraid to suit up and get in there and show you how it’s done. He leads by example. He’s a coach through and through. He’s very motivated and supportive, and he does everything right.”

Henson plans on going to Forsyth Tech for one year after graduation to spend more time with his family and help support Cooper. After one year at Forsyth Tech, he plans on transferring to N.C. State

Henson isn’t sure what he wants to do after college, but he’d like to do something in business. Although graduation is in June, he doesn’t want to give up lacrosse at West. He’s even thinking about being a volunteer coach next season.

“I thought about it. It’s crossed my mind,” he said. “We don’t really have a goalie coach, per se. But, yeah, I would definitely come out and help.”

Able is certainly amenable to that possibility.

“A lot of times it’s just me and Jess (Burcaw, an assistant) out there,” Able said. “And trying to work with different position groups to makes sure everybody’s doing what they need to be doing. Trying to be present everywhere is really difficult. And having an extra guy out to with the goalies, that’s amazing. So, I’m definitely open to that.”

Even though Henson has played lacrosse at West for four seasons, and all that his family has gone through in the last 13 1/2 months, it’s hard to put in perspective just how important the sport has been to him. The team is like an extended family to him.

“It’s going to be hard,” he said. “You work so hard for a program and then you have to leave it. The most sad part is everyone going their separate ways. I’ve been with these guys four years, three years. Yeah, it’s going to be difficult.”

Regional tennis tourneys on tap for the Titans