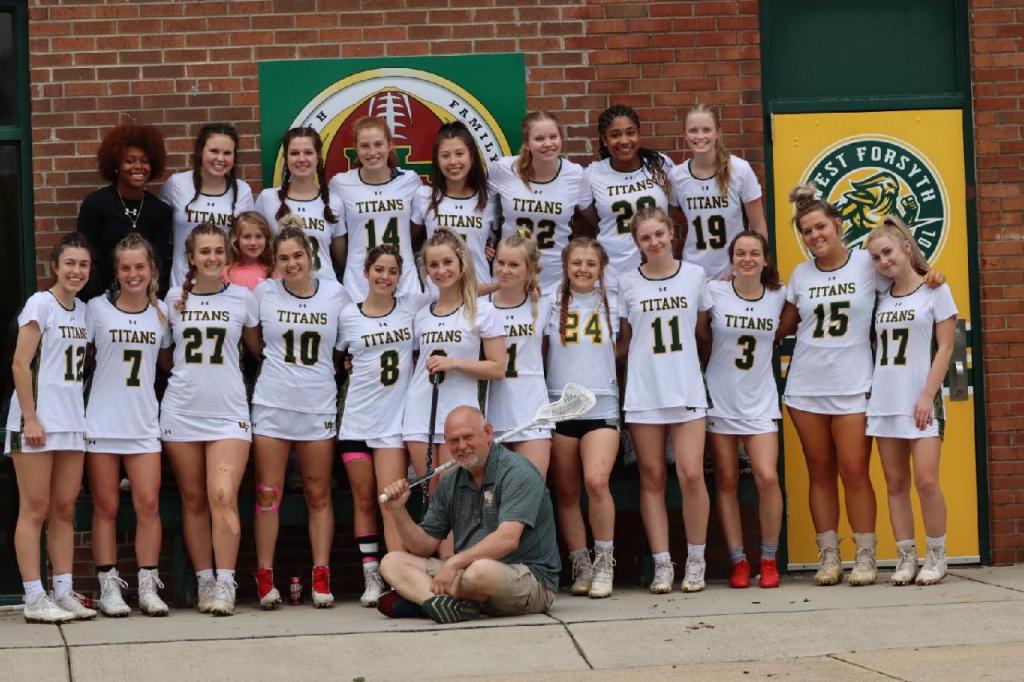 submitted photo The West Forsyth girls lacrosse team finished the regular season 16-1 (11-1 CPC 4A) and will enter this week's conference tournament as the No. 2 seed. The Titans shared the CPC championship with Reynolds, the No. 1 seed for the conference tournament, and the only team to beat West during the season. West has won the regular season conference championship for two straight seasons and Coach Doug Brawley was named Coach of the Year.

The girls lacrosse team at West Forsyth finished the regular season 16-1 (11-1 CPC) and shared the conference championship with Reynolds, the only team to put a blemish on the Titans’ schedule thus far.

The Demons downed West 10-5 on April 19 and picked up the No. 1 seed for this week’s conference tournament, which is being held at Glenn.

West downed Glenn 19-4 in Monday’s first round match and was scheduled to play No. 3 East Forsyth in Wednesday’s semifinal.

Baseball team on a tear

The Titans’ baseball team entered the week on a five-game winning streak in advance of the final three games of the regular season, including CPC showdowns against East Forsyth on Tuesday and Thursday. West will also squeeze in a nonconference game against Forbush on Wednesday.

The CPC tournament, which West is hosting, will begin next week.

The Titans’ softball has two games left in the regular season before the conference tournament begins next week.

West played Elkin in a nonconference game on Monday and will travel to play at East Forsyth on Thursday.

The Titans are still on top in the Central Piedmont Conference at 7-0 and have games this week against Wilkes Central (nonconference) on Tuesday and Glenn on Wednesday.

West (9-5-1 overall) entering the week will close their regular season with four straight conference games in the next two weeks before the state tournament begins.

West Forsyth ended the regular season in CPC golf with a third-place finish at the 18-hole conference meet, one shot behind runner-up Reagan and 15 shots behind first-place Reynolds.

The Titans shot 310 on Monday at Maple Chase and were led by Jack McCarthy’s 75. Daniel Stamey fired a 76 and Mason Beshears shot 77. McCarthy and Beshears also made the all-conference team.

West qualified for the upcoming regional championship, which will be held next week.

Gentle Giant: Parker Henson stands out on and off…