The Perfect Match: LaRue and Kozak aiming to replicate past sand volleyball success 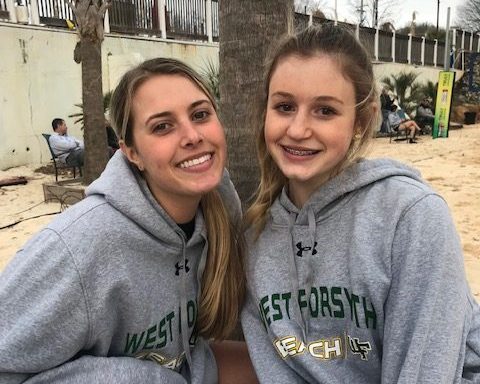 West Forsyth senior Clara LaRue and junior Kayla Kozak have had their toes in the sand every day this week, but they are not on vacation.
The two play as a pair on the West Forsyth sand volleyball team, coached and started by Coach Lauren Gillon in 2016.

Kozak and LaRue have a record of 12-1 and are hoping to continue their past success on the court as last year’s conference tournament champions and third-place finish in the state.

“Coming so close to winning states last year definitely left me hungry to improve and be able to win it all this year. Kayla and I have had to figure out how to communicate and what things work for us, but I think we have a really good chance,” LaRue said.

Though sand volleyball is more relaxed than the indoor season, the girls use it to stay in shape for the fall. The two put a lot of work towards adjusting to a different style of play.

“There’s only two players, so it’s a lot more mentally challenging because you don’t have a whole team to cover your mistakes, and you have to figure it out with just you and one other person,” LaRue said.

Luckily, LaRue and Kozak have good chemistry both on and off the court, making them a dynamic duo.

“We have a good friendship outside of volleyball, so we bond well while we’re playing,” Kozak said.

“They’re really good friends, so, especially in pairs, it helps when you’re playing with somebody that you like,” Gillon said. 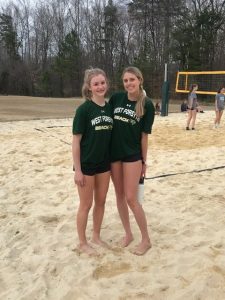 This year is only Kozak’s second year on the team as she moved from Texas the summer before the 2020-2021 school year. Gillon knew that she was a good player, but the connection and success she has had with LaRue has been serendipitous.

“It’s cool that they’ve been able to perform as well as they have, and to have so much success with Kayla being new to the area. That says a lot that she’s been able to integrate herself and that Clara was able to guide and lead her. Now it’s not one guiding and the other one following, it’s more both doing it together,” Gillon said.

Their individual strengths perfectly complement one another.

“Clara’s height and size, her power with her swing, and ability to block, and Kayla’s speed, quickness, ability to cover the court, and read the ball is just a really good combination,” Gillon said.

LaRue is aiming to make the most of her last high school season, but has a scholarship to play volleyball at Elon University this fall.

“It’s bittersweet, but I’m excited because it’s not my last season of volleyball… so I’m grateful for that. I just kind of want to enjoy the last few months of high school and spend it with the people I’ve been with for the last four years and end it on a good note,” LaRue said.

The two will head into postseason play hoping to bring home another conference championship trophy and making a deep run in the state tournament in May.

Janie Peterson is sports editor of the West Forsyth Zephyr.