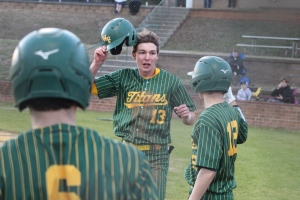 Timely hitting and some clutch pitching in the ninth inning pulled West Forsyth through in a 4-3 extra inning win against No. 2 seed Reagan in the semifinals of the Central Piedmont 4-A Conference Tournament Wednesday night at West.

The Titans, the No. 3 seed, got an RBI double from Patrick Showers to take the lead in the top of the ninth inning, then saw Harrison Lewis come on in relief with one out in the bottom of the ninth and record two strikeouts with the bases loaded to polish off the win.

The win sets up Thursday’s championship game against No. 1 seed East Forsyth at 7 p.m. at West.

Payton Martin went five strong innings as the starter and was also 2-5 with a double and run scored at the plate.

Bryson Chandler also delivered a key double and had two RBIs, and Reid Withers pitched 3 1/3 innings in relief of Martin.

The Titans and Eagles spilt their two matchups in the regular season last week.
East won at West 1-0 last Tuesday courtesy of a no-hitter, but the Titans rebounded and drubbed the Eagles on Thursday 12-0.