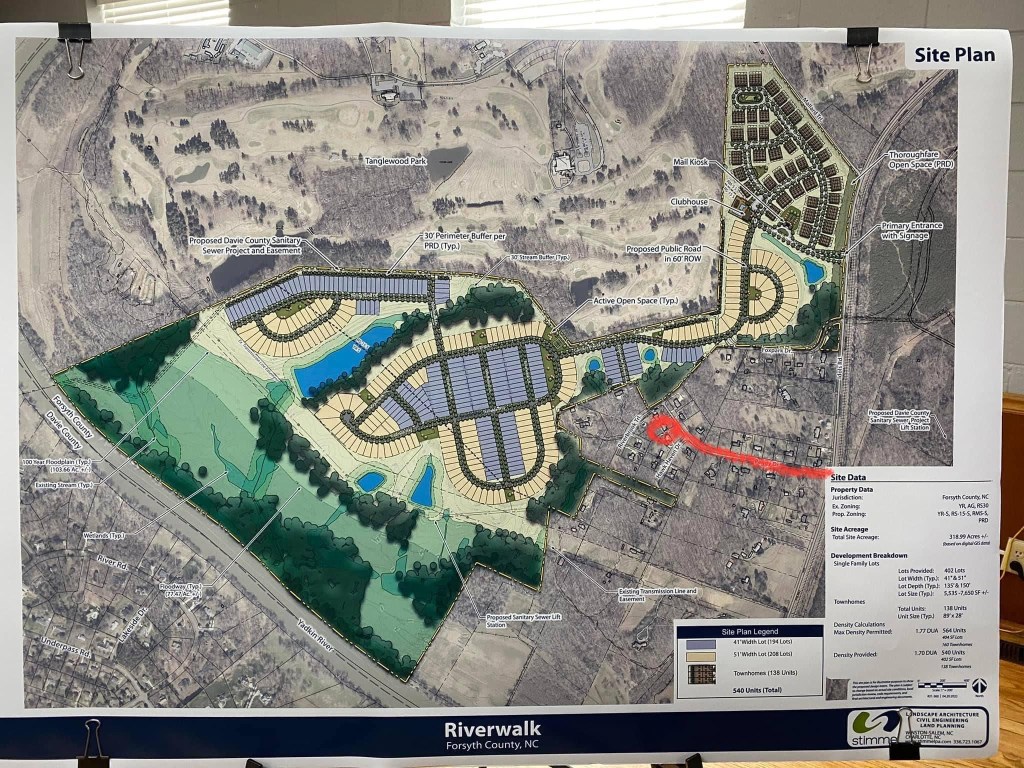 Submitted photo Plans for a new community off Idols Rd. have raised plenty of concerns

When notices went out to property owners on Idols Road adjacent to the Tanglewood Golf Course and Yadkin River of a proposed new development, it didn’t take long for word to spread fast and elicit concern.

The City-County Planning Board will be holding a public hearing at 4:30 p.m. on May 12, in the City Council Chambers on the second floor of Winston-Salem City Hall at 101 North Main Street in Winston-Salem. A zoning petition presented by RS Parker Development, LLC from YR, AG, and RS30 to YR-S, RS15-S, and RM5-S will be heard to discuss the 318.99 acres on the west side of Idols Road, south of Mallard Trail.

RS Parker is the same company seeking to build a development off Conrad Road in Lewisville.

A rendering of the proposed neighborhood to build 540 single family homes and townhomes did little to assuage residents in the area.

“I attended the meeting at the Clemmons Civic Center on April 20 to hear what the developer had to say,” said Ryan Scott, a homeowner in the Idols Acres neighborhood near the proposed new development.

“I experience the current traffic issues we already have in that area on a daily basis. I wanted to know how they planned to alleviate that problem while adding more travelers to the roads. The developer’s engineer said they would add a turning lane on Middlebrook Road turning onto Idols Road. Currently anyone who wants to turn right on Idols Road darts through the Clemmons West neighborhood. Another reason given at that meeting to not worry about increased traffic and safety was that those buying the homes they were building would likely be elderly, and not traveling on the road during peak times of day. I can tell you if they are anything like my 85-year-old grandparent, that will not be the case.”

Scott said his neighborhood, which the new development would wrap around roads like Hawk Haven, Riverbrook Trail, and Peggy Drive, would be impacted dramatically.

“There is roughly 100 acres in the flood plain that the developer can’t even use so it brings it to a much higher density neighborhood,” Scott said.

Surrounding neighborhoods like Clemmons West, and Salem Glen have rallied together with fellow neighbors who have the same concerns.

“I’ve received about 50-60 calls or emails in the last day or so,” said David Zevaleta, president of the Salem Glen Homeowner Association. “We have 397 homes with 80 single-family homes about to go up in our neighborhood. We already experience a lot of busy traffic up where the Walmart is during peak hours. You can easily go through 2-3 light cycles while waiting. Another big concern we have is the impact on our elementary school which is already overburdened. If just 20% of the proposed development have a child attend, can you imagine what that would do?”

Zevaleta recognizes that you can’t stop development, however, he has concerns over the bearing of the current proposal.

“I get that we still live in a capitalist society, but there has to be a solution where the traffic and safety impact is a lot smaller, too. My fellow neighbors are echoing these sentiments and voicing their apprehensions,” Zevaleta said.

Director of Planning and Development Services for Winston-Salem/Forsyth County Chris Murphy said that the public is welcome to attend the upcoming hearing to voice their concerns.

Murphy also mentioned that the zoning request by RS Parker is due to the developer needing the respective districts to allow a mixed product type (i.e. attached townhomes).