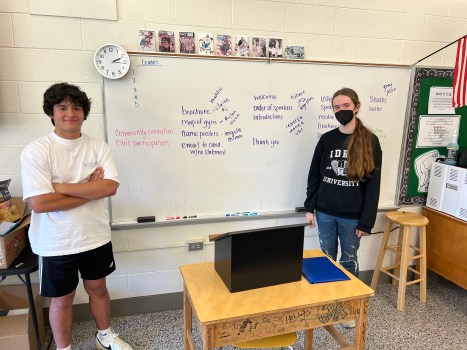 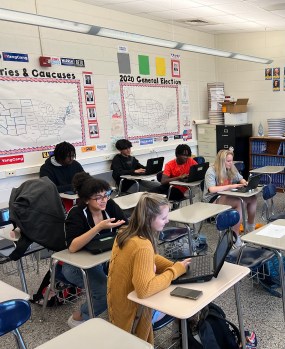 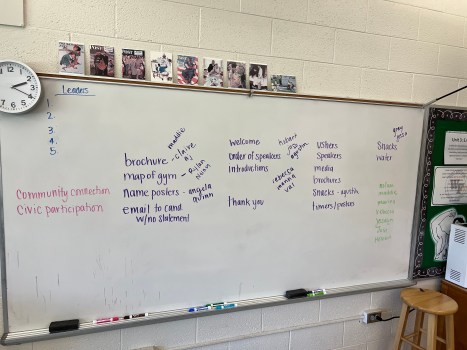 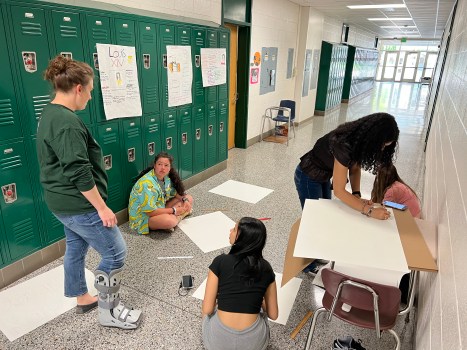 The school year may be winding down, but students in Emily Corey’s Seminar Civics class at West Forsyth are gearing up for a hands-on learning experience that is sure to give them an inside look at the political process.

The class is organizing a meet and greet forum for all candidates who are running for a seat on the Winston-Salem Forsyth County School Board. The event will be held on Wednesday, May 11, in the Harold Simpson Gymnasium at West from 6:30-7:45 p.m.

All 28 candidates who have filed to run have been invited, and students from the class said they have heard back from most of them.

“As of now, it looks like most of them will be attending,” said Rylan Santos, who is one of the two media liaisons from the class. “I think we have 24 who have responded that they will likely be here.”

Santos and Claire Reinthale have been busy reaching out to members of the press since the idea was presented to the class a few weeks ago.

Everyone in the class is a sophomore, meaning they cannot vote in the upcoming elections.

“That doesn’t mean they can’t have a say in the process,” Corey said. “They have a lot of vested interest in it because they will eventually be voters. And they will still be students at this school for the next two years, and this race in particular is one that will directly impact them. We hope to have a great turnout and that it shows these students how this process works. It’s a great opportunity to get involved in their community and now, their future as well.”

The Seminar Civics classes have had a long tradition of hosting events such as these over the years. Typically, they involve meeting those running for office for the Clemmons Town Council.

“We weren’t able to do that last year because of Covid,” Corey said. “I’m so glad they are getting a chance to do this one because of what it is and what they are running for.”

Reinthale said that they have been busy prepping for the event as soon as they got approval. In between quizzes about landmark Supreme Court decisions and the powers of the federal government, the group has been brainstorming plans to cover every detail.

“Each candidate will be given 90 seconds to introduce themselves and present what they stand for,” Reinthale said. “Then they will all have a table set up with their name on it and they can have any materials they like with them to hand out to anyone who is there.”

Other student groups in the class have been tasked with making posterboard nameplates for each candidate, publishing a brochure that will include a statement from each candidate, making a map to direct the public and candidates through the gym, and also a script for the student-led introductions of each candidate.

“This is a great way for us to apply what we’ve been learning about in class,” Santos said. “We’re all in this class because we have an interest in government and politics. This gives us a great opportunity to take what we’ve learned and put it into action.”
Reinthale seconded that assessment.

“It’s a great chance to not only get involved in our community, but also apply what we’ve been doing in class all year and apply it to real-life circumstances,” Reinthale said. “And because it’s for people running for the school board, it does directly impact us because these are the people who will be representing us and our interest the next few years. It’s pretty special to be able to take control and organize an event like this at our age and lead the charge for people who may not know who they want to support yet, give them a chance to meet some of these candidates and see what they stand for.”

In addition to the emails the students have crafted in an effort to get the word out, the event has also been heavily promoted through various social media channels by students and staff alike.

“A lot of powers above us have also been helping to spread the word,” Santos said. “The superintendent (Tricia McManus) found out about it and started inviting people. I think it’s blowing up a lot bigger than we even expected it at this point. It’s pretty neat that so many people seem to be so interested in taking part of this.”

Corey is proud of her students’ efforts to get things lined up in the short timeframe they had in which to pull it off, which also included a date change as to not interfere with a scheduled school board meeting next Tuesday.

“There’s no better way to learn it than to do it,” Corey said. “It’s great to see them enjoying the planning and the process to it and also having a good time knowing that they are learning something, too.”