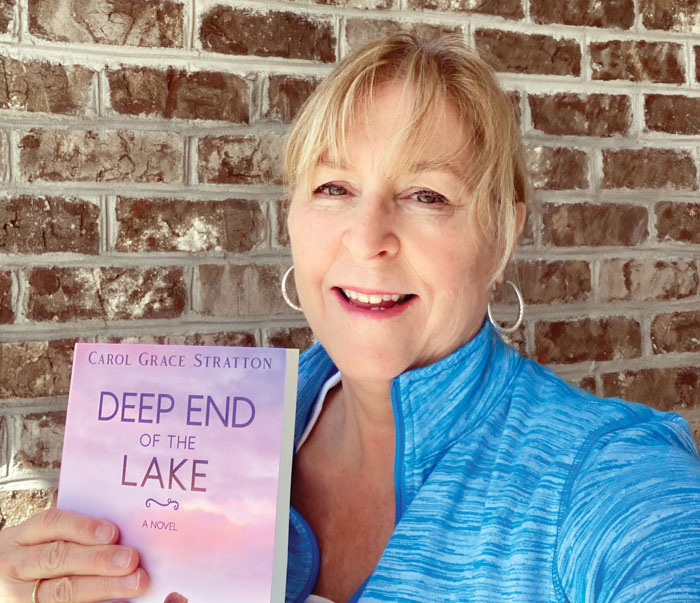 Carol Stratton with one of her books

Carol Stratton spent her childhood in the San Francisco Bay area. “I was the bossy older sister of four,” Stratton said with a laugh. “From as early as I can remember, I was a voracious reader. My mom used to goad me when I didn’t want to go out and play because I was lost in a book.” Stratton participated in her local library reading program. “I enjoyed reading fiction and stories about families primarily. I also explored other topics to receive extra points in my local library reading program. I didn’t realize at that time that I was subconsciously absorbing what a good plot was, expanding my vocabulary, and how to provide character development,” Stratton said. Stratton showed the skillsets she was learning when she was published for the first time in sixth grade in her local paper.

As Stratton continued in high school, her love of English and writing didn’t diminish.

“When I thought about what I wanted to study at California State University, Fresno, I immediately considered English for my major. On many of my papers from an English professor who also happened to be head of the English department, he questioned if I really was in the right major for me. At that age I was easily discouraged. I allowed what one person said about me to be my truth,” she said.

Subsequently, Stratton chose to pursue a major in recreational therapy and minoring in music. “I also met my future husband, John in college. We were in the same college and career group at church. In between our dating and getting married, I chose to go to New Zealand for Bible school for six months. I wanted an adventure and to study the Bible a bit more in depth,” Stratton said.

“New Zealand was gorgeous. I went when it was winter coming into spring, so it was a bit chilly without central heat. It wasn’t luxurious at all. For a pretty modern country, they were enamored with a lot of the modern conveniences we had back home, like a garbage disposal in our sink.

“When John and I were married, we moved to the Midwest to live near his family for a while. I worked as a school aide and utilized my recreational therapy background. I worked with children that were on the low functioning side of the spectrum. I found it intriguing how these kids thought. It was like a puzzle trying to see how you could help each one.”

Stratton had always known that outside helping children inside a classroom, she also had dreams of being a mother.

“I became a stay-at-home mom as soon as our oldest, Joel (43) was born. Joel was born about six weeks early and that’s how long he ended up staying in the hospital until we were able to bring him home. John and I knew that we wanted to have a larger family and had children: Seth (40), Erica (39), Caitlin (34). Our kids are really close, in part to our moving a lot with John’s job. We lived throughout the Midwest in Indiana, Michigan, and Illinois. It’s tough for kids to build new friend groups, and they did a great job,” Stratton said.

As Stratton’s children became older, her love for literacy and writing did not waiver. Stratton wrote for local newspapers and magazines as she worked her way up to national magazines. Stratton began to explore publishing her own books.

“I had 33 rejections on the first novel that I never ended up publishing,” she said.

The influences in Stratton’s life helped provide ample inspiration. “Changing Zip Codes: Finding Community Wherever You’re Transplanted” was her first book stemmed from the 22 moves Stratton experienced. “Moving is one of the top stressors you can experience, and I wanted to write a devotional to help people through it,” Stratton said.

Stratton’s desire to weave her passion in with her life lessons is how the first of the “Lake Surrender” series began.

“I used my camp experiences that I found meaningful into this book. I wanted to honor all of the kids that I worked with that had autism. People weren’t writing a lot about it when I first started. It was just coming to the forefront. I wanted there to be a level of public awareness because these kids are truly special,” Stratton said.

The beauty of Stratton’s evolving literary career was that when her family decided to move to North Carolina, it was able to continue. “We came down here because my son, Seth, decided to go to Appalachian State University. We saw very quickly how beautiful it was,” Stratton said. “Not too long after that, Erica decided she wanted to be a teacher down here because she wanted to be near her brother as well and it was challenging finding a job back in the Midwest.”

John and Carol moved to the area in 2009. “Our other two children also came down to North Carolina. It’s wonderful because I have now assumed the role of Gammy and I am lucky to have nine grandchildren from ages 3 years old to 11 years old. Eight of them are still here on Earth,” Stratton said.

As Stratton continues to wear both her grandmother and author hats, she finds encouraging others who aspire to publish is important to her. “I have been fortunate with my family being supportive of my writing. Even if you don’t feel that support and feel the desire to write, I always encourage people not to stop. It involves a lot of hard work. If you are persistent and you continue to work on the craft, go to writing conferences, stay open to criticism, you can do it,” she said.

“You may find yourself writing a story that turns someone’s life around and changes them. That’s the power of stories. I don’t believe in preaching; however, my characters show what they can endure with bumps along the way. The power of Jesus is present throughout my stories.”

Stratton continues to write, conducts talks about how to write, and soaks up the most precious of life’s moments with her family.

“I am currently working on my third of the Lake Surrender series,” said Stratton, whose books are all available on Amazon. “I feel blessed that my family has been so supportive. If I can encourage others along the way, then it’s something I will always continue to do. Small beginning are good as it’s a craft to be learned.”