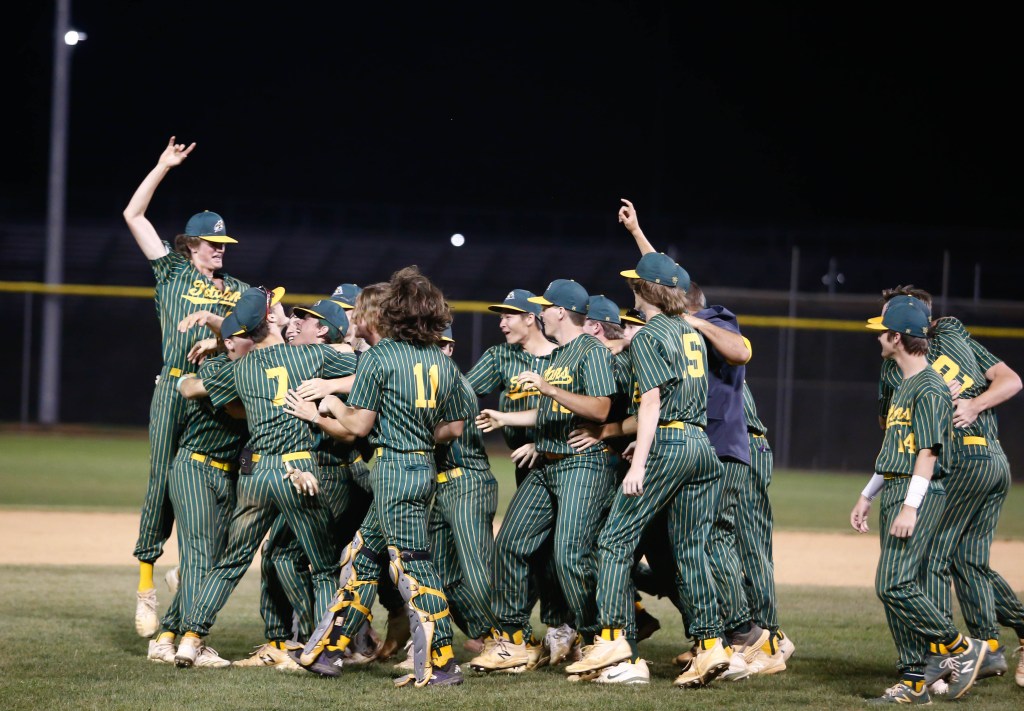 Brad Bullard, West Forsyth’s baseball coach admitted that the bottom of the seventh inning in Thursday night’s championship game of the Central Piedmont 4-A baseball tournament seemed to last a little longer than he was comfortable with.

After taking an 8-3 lead into the final inning, Bullard watched as East Forsyth mounted one final charge for a comeback. After loading the bases and adding a run on a sacrifice fly, the Titans needed two more outs to secure another title.

“I remember telling my assistant coaches that we can never make it easy on ourselves,” Bullard said with a laugh.

Then Cam Wall came in to slam the door on the Eagles’ comeback on two pop ups to record the final two outs, which wasted any more worries the Titans and Bullard had.

8-4 final. Conference tournament champions in one of the most difficult leagues in the state.

The celebration was on.

“The wait was worth it,” Bullard said. “But it did feel like those last two outs took forever to get.”

As was the case for most of the season, there was a balanced effort on offense and steady and effective pitching performances.

Harrison Lewis got the start and went three innings while striking out six. Reid Withers came on to relieve Lewis for 3 1/3 innings and struck out seven.

“What’s so neat about Cam Wall is that he was in a very similar position his freshman year,” Bullard said. “Conference tournament championship game against Davie at Reagan. He came in and got the save for us in that one, too. So, to see him go full circle like that in a big moment was pretty special. He came in (Thursday) night, threw six great pitches and got two popups.”

Withers also did his part at the plate, going 1-2 with a double and a run scored. Ditto for Wall, who hit a home run and had two RBIs. Payton Martin also homered and scored two runs. Jack Vest tripled and had an RBI. Bryson Chandler was 2-3 with an RBI and a run scored.

“We’ve had a lot of that all year for the most part,” Bullard said. “This may be the best offensive team I’ve had as a coach in my 15 seasons in the program. And I’ve heard this from a lot of other coaches that we have a great lineup. When you look at it one through nine, our guy hitting eighth, Cam Wall, has hit two homers this week. Parker Lowe, who hits in the seven hole, is hitting over .300 this year. There really isn’t an easy out in our lineup.”

The Titans have also been blessed with great pitching all season and relied on that during the championship run as well.

“As with any good team, it always starts on the mound. We’ve been really good on the mound,” Bullard said. “Harrison Lewis, Payton Martin and Reid Withers have just been phenomenal all year for us. When you’ve got three guys like that who can go out there on the bump, you feel like you’ve got a chance to win every single night.”

The Titans will take a 22-5 record into the NCHSAA 4-A state tournament this week. Pairings will be announced on Saturday.

“We had a few hiccups right after spring break because we just didn’t play very well,” Bullard said. “And at this time of the year there are so many distractions. You’ve got prom coming up. Graduation is coming up. I had kids taking AP exams all day. But after spring break, I challenged them and let them know they’ve worked so hard all year and we needed to turn it back around and play the way we are capable of playing. And I think in our three games this week, we played some of the best baseball we’ve played all season long.”

Bullard is confident that the Titans’ play will carryover for the next phase of the postseason.

“Coming through our conference like we did, when you have three of the best teams in the state in us, East and Reagan, any of us could win on any given night,” Bullard said. “Beating Reagan in a nine-inning game (in the semifinals and then beating East, who were the regular season champions, that’s huge for us. This is just an awesome group, and they are led by these 10 seniors. Everyone knows what every student has been through the last two years, and this is a tight-knit group of kids who are fun to be around. They joke around and keep things light, keep me from being so uptight and serious. And it’s just great to see all of their hard work payoff in a big situation like this. I hope we get to keep experiencing that the next few weeks.”

The Titans picked up the No. 13 seed for the NCHSAA 4-A state tournament were scheduled to take on No. 20 Concord Cox Mill on Tuesday at West.