Dailey hopeful for return to soccer field this season 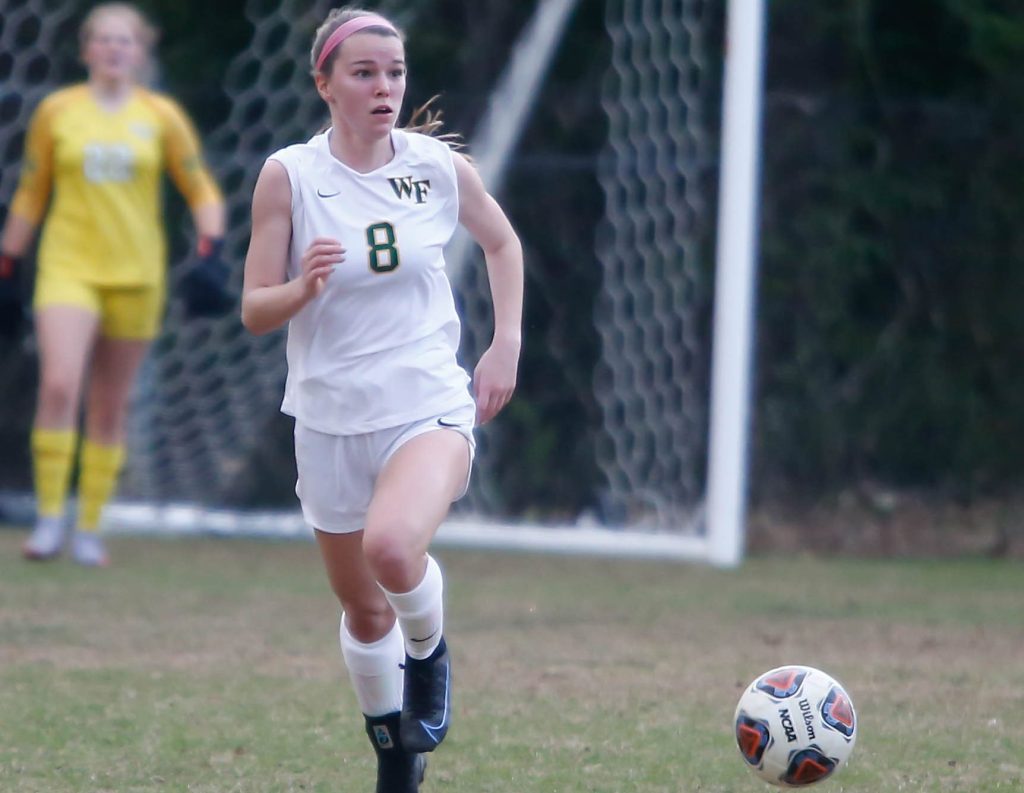 Concussion has sidelined the Titans senior since mid-April

Uncertainty is always prevalent with high school athletes who are seniors.

With many spring sports playoffs already in full swing in the NCHSAA, and with the playoffs starting next week for girls soccer, there is even more uncertainty for senior Caroline Dailey, a soccer player at West Forsyth.

Before this past Monday’s final home game against Reynolds, West Forsyth had already clinched at least a tie for the Central Piedmont 4-A championship with an overall record of 13-5-1 and 10-0 in the conference, with only Monday’s game and Wednesday’s road clash with cross-county rival East Forsyth left. The pairings for the state playoffs will be announced on Friday.

But Dailey, who is a tri-captain for the Titans, doesn’t know if she’s going to be able to play the rest of the season. Dailey suffered a concussion on April 19 against East Forsyth, her third known concussion since she was in seventh grade.

She hasn’t played since.

“I don’t really know exactly how to explain it,” Dailey said. “One of (East Forsyth’s) center backs was trying to clear the ball, and I was just kind of right there and I was close to it. And it was a pretty driven ball. It just hit me right in the head. It all went downhill from there.”

She initially didn’t think the injury was serious.

“At first I thought I was fine,” she said. “I thought I’m going to be playing through it. And I think the adrenaline kicked in. Soccer is strict about head injuries. If there’s any question, you’re required to come off the field and get checked out. And as soon as I came out and sat down, I think my adrenaline rush kind of went away, and I realized something’s not right.”

The play happened near the West Forsyth bench, so Coach Scott Bilton saw the whole incident.

“She was actually fairly close to the sideline,” Bilton said. “And one of the great things about the way she plays is that she plays incredibly hard. It was a matter of her just chasing down a ball and applying pressure. And the East Forsyth girl just turned on it and was trying to get up the field.

“It’s just so unlucky as, a lot of times what happens with these concussions because you just want a kid to play hard. She did, and sadly it just hit her in the spot.”

Bilton immediately knew something was wrong with Dailey.

“Right away because she stayed down at first, which is what we always tell them,” Bilton said. “We were close to tell her, I said, ‘Just relax, just relax.’ And she tried to stand up and was wobbly. And she didn’t make it all the way to her feet or fall or anything like that.”

Bilton said that trainer Linsey Ciccocioppo was quickly on the scene to assist Dailey.

“We had the trainer there and it’s great to always mention about how amazing it is to have those trainers there,” Bilton said. “I can’t emphasize (enough) how important that is, and how much of a blessing it is for our community, and really state-wide and nationwide. Now, that’s common practice.”

After sitting down on the sidelines, Dailey’s symptoms got worse.

“Everything got really blurry,” she said. “I was really dizzy. My balance wasn’t really there. I had a massive headache. And those are probably the worst symptoms.”

As the rest of the game progressed Dailey knew the concussion was more serious than she thought.

“(Dailey) stood up, but was still uneasy on her feet,” Bilton said. “Her mom and dad were right there. So, we came down and talked. And we told her it was fine that if you need to go home and rest just go ahead and go home right away. And in her typical fashion, she was like, ‘No, I’m not leaving.’

“She jokingly put on her mom’s sunglasses, so she was saying she was wearing mom’s glasses. She just sat there. She is one of our captains and is a consummate leader. And she wanted to still be leading the team. And she did. And that speaks to her character. When we were shaking hands, she tried to stand up, and I was like, ‘No. Just relax.'”

Dailey didn’t go the hospital that night, but she eventually went to see a doctor.

“So, I’ve had multiple concussions in the past,” she said. “And I was kind of just playing it out to see how I was doing. And I think it was the next day, I went there Thursday to the doctor and was told I really couldn’t go to school, and couldn’t play, and stuff like that.”

Unfortunately, this wasn’t Dailey’s first concussion. She had one in the seventh and eighth grade while playing club soccer for Fusion.

“I had been though it before,” she said. “And definitely, my (seventh) grade year playing soccer, I had a very bad concussion in which I passed out. And so I kind of knew what to do.”

Any head injury is serious, but to have three in a short period is eye-opening for an 18-year-old.

“I would say it’s pretty serious,” Dailey said. “I would say for me, my academics are really important, so to me not having permanent brain damage is pretty important to me. And just even not academically, just function-wise, I mean it is pretty scary, especially in the moment, not having all my senses there — being dizzy, seeing stars everywhere. It’s scary when it’s happening.”

Little by little, Dailey is getting better, though she doesn’t know when or if she’ll be back on the field.

“She’s starting to come a little bit more,” Bilton said. “And still telling her to kind of take it easy because she’s getting headaches and still recovering just by going to school. We just really want her to worry about her health first, and then get her back to be able to play if she wants to.”

That’s easier said than done for a senior playing a sport competitively for the final time.

As a coach, Bilton knows that he has to temper Dailey’s emotions.

“And really it is as light and as just easy going as it can be. And that’s kind of the mentality that we’re going with. She’s frustrated and I know she’s frustrated. She’s one of those that with this group that I have they so desperately want to be out there. And, you know, that’s just one of those things that just talks about how great they are.”

Dailey is still restricted from practicing on the field with the team.

“It’s definitely not easy,” Dailey said of not being able to play. “Obviously, soccer’s been a big part of my life. And then, this is my last year for me with competitive soccer. And obviously the drive is there. I want to be out on the field. And it’s hard, you know.”

The players have galvanized around Dailey’s injury.

“These girls, we’ve said it several times, ‘Let’s do this for Caroline,'” Bilton said. “And she mentioned it the other night, you guys just have to keep winning. And we said that. We said let’s make sure we get a chance to get her back out there. And I think they know that about her and know how bad she wants to be out there.

“It’s one of those things. We keep doing the best that we can as a team. And we want to see her out on the field again as long as medically, she is fine to be able to do so.”

If Dailey is cleared to play before the end of the season, she knows the inherent risks that she is taking.

“Obviously, we’re just really hoping that nothing has really happened that would cause anything permanent,” she said. “Obviously, they talk about the fact that there is the risk if I go back on the field and have another head injury, getting back on the field, that could lead to some pretty serious permanent damage.

“Right now, we’re just hopeful that everything heals pretty well and we don’t have any long-term symptoms.”

Whether Dailey gets to play or not, her career and her time at West Forsyth is coming to an end.

“I think it’s really sentimental,” she said. “You don’t ever realize how quickly things are going to come to an end. I still feel that it was just two weeks ago and that I was 7 years old and touching a soccer ball for the first time. I think it’s kind of super-sweet. A lot of these girls, we’ve been playing with forever.

“Some of these girls I played with in middle school, and then they’ve come up through high school with me. And obviously Shelby (Lowder) and Christy (Lauffenburger) and I have been on the same team since we were playing rec. I think it’s just super-sad that it’s coming to an end, but at the same time, (I’m) super-grateful for all the friendships and even the family we’ve made from all the soccer.”

As for college, Dailey has a 4.6 weighted grade-point average and will be at N.C. State in the fall. Her sister Meghan just graduated from N.C. State last weekend.

“If you would’ve asked me two or even a year ago, I would’ve said there was no way I was going to N.C. State because my sister was there,” she said. “And I want to be different than her. But I got into the engineering program, which is something that I really value. I would say they have one of the best programs in the country. So, I’m really excited about that.”

Like her father, David, Dailey wants to follow in his footsteps and be an engineer. However, she wants to be a biomedical engineer.

“I always look up to (my dad),” Dailey said. “I think he and I have the same brain. We both think about things on a way deeper level than anyone ever needs to think about them. And I just really like the science behind things and how things work. I chose to do biomedical because (I think) it would be really cool to do some medical research with prosthetics and different medical devices.”

Dailey and her father even helped Bilton with a home project he had last summer.

“She also spent (last) summer and part of COVID time, with her dad, building a deck at my house,” Bilton said. “Her dad’s a contractor. He brings her along. We joked about it, but then he said she’s one of my best workers. And I think she is. From watching her she really works hard and, for lack of a better expression, she’ll swing a hammer as hard as she’ll score a goal.”