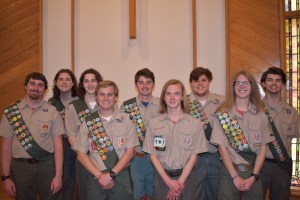 Ten members of Boy Scout Troop 705 were recognized during a ceremony on May 7 at Lewisville United Methodist Church for achieving the rank of Eagle Scout.

Eagle Scout is the highest advancement rank in Boy Scouts. More than two million Boy Scouts have earned the rank since 1912.

Eagles do their best each day to make their training an example. Their rank and their influence count strongly for better Scouting and for better citizenship in their troop, their community and in their contacts with other people.