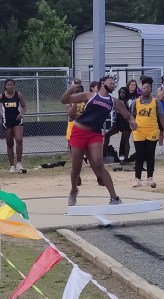 Laila Jones of Clemmons won the shot put with a throw of 40 feet, 1 inch.

The Lewisville girls finished in fourth place in the team competition with 51 points, 10 points behind champion Jefferson.

The Clemmons boys finished seventh with 26 points and the girls finished eighth with 24 points.