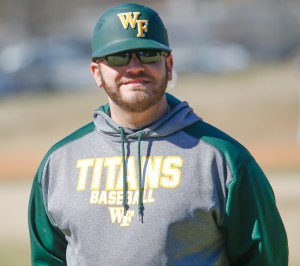 The West Forsyth baseball team is moving on in the NCHSAA 4-A state tournament.

West (24-5) got a gem from Harrison Lewis on the mound to back an outpouring of offense in a 10-0, five-inning win against visiting Davie County in Thursday night’s second round.

The Titans led 7-0 heading into the bottom of the fifth and got an RBI single from Jack Vest to make it 8-0, then Cam Wall’s two-run double ended the game.

Bryson Chandler gave the Titans the lead in the bottom of the first inning after a two-run home run.

In between, Payton Martin and Reid Withers also homered and Cam Daly added a two-run single as the Titans got plenty of firepower up and down the lineup.

West will take on the winner of the No. 28 Ragsdale vs. No. 12 Indian Trial Porter Ridge game, which will be played on Friday, in the third round.

If Ragsdale wins, the game will be on Tuesday at West Forsyth. If Porter Ridge wins, West, the No. 13 seed. would travel there for the game since Porter Ridge is the higher seed.