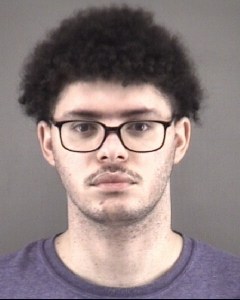 The Forsyth County Sheriff’s Office has brought additional charges against an individual originally charged with indecent exposure at Lewisville Middle School in August 2021.

On Aug. 25, 2021, a contracted employee of the Winston-Salem/Forsyth County Schools was found to be intentionally exposing his genitalia while on school property at Lewisville Middle School. The investigation has continued since the original arrest.

After consultation with the Forsyth County District Attorney’s Office, further charges have been brought.

Charles Edward Holland, 24, of Winston-Salem, was arrested and charged with 17 felony counts of indecent exposure where the defendant is over 18 years old and the victim is less than 16 years old, and 14 felony counts of indecent liberties with a student. Holland appeared before a magistrate and received bond secured in the amount of $10,000. He is currently confined to the Forsyth County Law Enforcement Detention Center and is scheduled to appear in court on May 17.

“We are committed to ensuring the safety of all residents of our community, no matter if they are at work, play or school,” Sheriff Bobby F. Kimbrough Jr. said. “The children of our community — our community’s most vulnerable residents — absolutely deserve to not only be safe but to also feel safe. We continuously work collaboratively with the Winston-Salem/Forsyth County Schools to ensure that our community’s children are protected to the best of our ability while they are being educated. We appreciate our working relationship with the school system, in this particular incident and throughout the school year.”

Anyone with information related to this incident or any criminal activity should contact the Forsyth County Sheriff’s Office directly on our non-emergency number at 336-727-2112; anonymously text information, photos, and video via Text-A-Tip at 336-920-8477; or anonymously call Crimestoppers at 336-727-2800 for English or 336-728-3904 for Spanish.