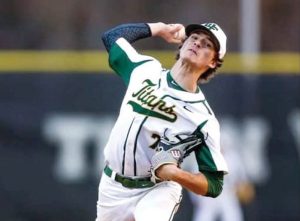 The West Forsyth baseball team is still rolling right along in the NCHSAA 4-A state tournament.

Payton Martin and Cam Wall combined to pitch a no-hitter as the Titans blanked No. 28 Ragsdale 10-0 in six innings on Tuesday night in the third round.

West, the No. 13 seed, will travel to No. 1 Charlotte Providence on Friday night for the fourth round. The game is scheduled to start at 7 p.m.

Martin threw 5 2/3 innings and struck out 10 before giving way to Wall, who recorded the last out in the top of the sixth. He was also 1-4 from the plate with an RBI double and a run scored.

Leading 8-0 headed to the bottom of the sixth, Martin delivered his RBI double for a 9-0 lead and Patrick Showers delivered the game-ending RBI single.

Jack Vest put the Titans on the board in the bottom of the first with and RBI singled to score Martin. Bryson Chandler had an RBI double in the third to make it 2-0, and Lucas Manning drove Showers home with an RBI single for a 3-0 lead.

Reid Withers delivered a three-run home run in the fourth inning as the lead grew to 6-0, and Chandler added a two-run shot in the fourth for the 8-0 lead.

The Titans have allowed just three runs in the postseason, which all came in their opening round win against Concord Cox Mill.

The last two games have been shutouts that have ended courtesy of the 10-run rule.

Chandler finished 2-3 with three RBIs and two runs scored. Manning was 2-3 with an RBI.