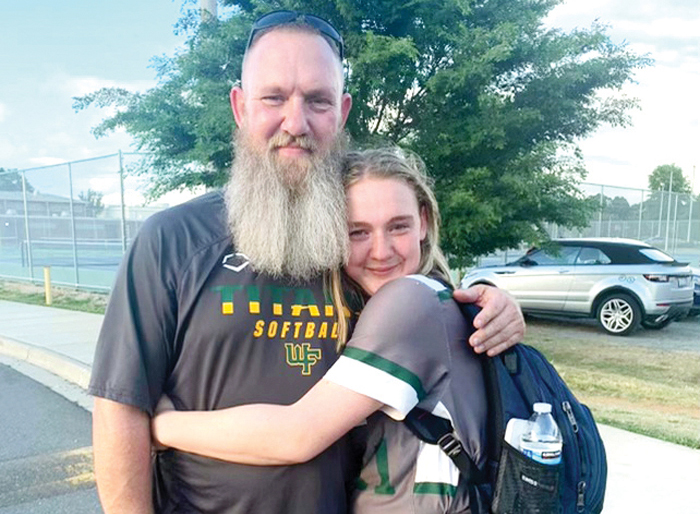 Speed and smiles have fueled Hannah Patterson, who has steadily improved during her softball career

Hannah Patterson is one of those teammates who puts a smile on your face.

Patterson, who just finished her senior season as the right fielder for the Titans, said that her teammates affectionately call her “Smiley.”

“Everybody says I’m extremely mature for my age,” she said. “I just realized you’re going to go through things in life — complicated. It’s never going to be easy and you’ve just got to keep going.”

Those are positive words from an 18-year-old, who not only has the everyday rigors of being a teenager, but to be an athlete, a senior about to graduate, and a child of divorce. Her parents divorced when she was 3 or 4 years old. She lives with her father and her stepmother and her half-brother, Jacob Patterson, who is 11, the majority of the time.

She also moved to Forsyth County from Davie County just before the start of her freshman year.

“It’s always tough just because you have to watch both sides,” she said. “And with sports sometimes we have a Saturday scrimmage and it’s tough to decide which house I would stay at. It’s always tough whenever I’d change from going from one school to a new school with all new people, all new players. It’s always fun, but awkward, to play Davie because I knew everybody over there.

“I wouldn’t change a single thing. I loved meeting all the people out at West. And I still have all these friends at Davie that I talk to.”

That mindset has allowed Patterson to see a different perspective.

Patterson visits her mother, Amy Campbell-Patterson, who lives in Mocksville, every other weekend. She also has a 21-year-old brother named Joseph, who lives with her mother.

“We’re able to work through it,” Hannah Patterson said. “I go over there sometimes, I’ll visit during the week, a day that I don’t have a busy school day. But it’s definitely difficult. Out in Davie I was raised by a lot of family. My neighbors were my cousins. My grandparents lived across the street. So, I was out there with family all the time. 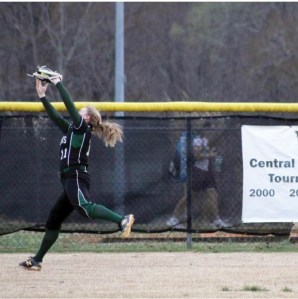 Hannah Patterson snags a line drive for an out. Submitted photo

Patterson said that she and her father are two peas in a pod.

“We are extremely close,” Patterson said. “He coached me in softball, so he’s coached me since I was little. We’re very much alike. Everybody says we drive alike. It’s sad whenever you think about it because me and him both are crazy with driving.”

A positive attitude exudes from Patterson in all aspects of her life. She played JV softball her first two years at West. Last season as a junior she played both varsity and JV to fill roster spots on the JV team. And this season, according to Coach Kevin Baity, she blossomed into a top-notch player.

“I just think that determination that she’s going to be successful, both in the classroom and on the field — the thing is, nothing bothers her,” Baity said. “If she makes an error, I say that because she only made one error all year long, but if she does strikeout, it doesn’t faze her. She comes right in and she’ll be the first one yelling for the next person that’s batting behind her.”

Patterson takes Advanced Placement (AP) classes but being on the softball field is her happy place.

“It’s relaxing to go out there and have fun with friend and have a team that you go to and just relax,” she said. “It’s a time to get away from family, focus and have no distractions.”

However, being a softball player in a top-notch program like West Forsyth had its initial drawbacks. Fair or unfair, there’s a stigma attached to playing right field.

“It’s always tough whenever you hear that you play right field. It’s always, ‘Oh, you’re a right fielder.’ It just gives off the idea that you’re not the best player,” Patterson said. “As I’ve played, I realized I have the capability to play there because we have a great pitcher (Cate Etchason) and (the hitter’s) going to be hitting it to this side. And I realized why (Baity) always kept me over there. They’ve always said I have a good amount of speed — I know I’m not the fastest, but I’ve never believed it for myself until I gained confidence this year.”

Baity said that Patterson finished with a .957 fielding percentage and had 23 putouts.

Ironically, the lone error she had was in the second game of the season — against Davie County.

“Honestly, she just had to convince herself, during the scrimmages (before this season) she had a couple balls that dropped in front of her,” Baity said. “But she’s fast. I kept telling her, ‘You’re going to surprise yourself if you’ll try for those balls. If you lay out one time and you’ll realize you can get to those balls.

“And I think it was against Davie, maybe, she made an unbelievable, laid-out foul-ball catch, and from then on she wasn’t scared to go after anything. And I think she made one error all year long.”

Not only was Patterson sterling in the field this season, she was no slouch at the plate. Patterson finished with a .397 batting average. She scored 18 runs, had 26 RBIs, and was third on the team with 11 stolen bases.

“The good thing about her, since she was fast, also, she may get a good line-drive hit one time and the next time we’d bunt her and she’d beat it out because she’s so fast,” Baity said. “And she’s very confident doing that. She’s one that, she may miss a bunt and a lot of girls will miss a bunt and they’re shot. They just give up.

“But you can call her with two strikes and tell her to bunt and she’ll still lay one down.”

Patterson batted fifth in the lineup this season, which is a key part of the batting order.

“This year I grew in bunting,” she said. “I had some good hits. I always love to dip my shoulder when I hit, but I grew in bunting, and I believe that’s what moved me up in the lineup because I was able to bunt, or even just get a base hit to score anybody in.”

All of the bunting helped drive the offense for the Titans, who outscored their opponents 251-78 this season.

Batting fifth was still a surprise to this Patterson.

“It was a shocker when it first happened because I knew at the beginning why I was ninth (in the batting order),” Patterson said. “I had the speed before Sydney (Horton) and Abby (Hunter). They were the fastest girls. But I also had this good amount of speed to where I more likely could get on.”

“I believed that I inspired others, and became physically better and more confident in myself,” she said. “Just realizing even when I make a mistake, I would try my best in hitting. And (if) I made a mistake in the field I would tell myself to counteract it and just pick it up in another position.”

Baity always hates to see it when the seniors play their last game.

“That’s always difficult,” he said. “And the first thing I say every year is there’s only four teams that are going to end up happy winning their last game, and that’s only happened to me one time (when West Forsyth defeated Fayetteville Cape Fear to win the NCHSAA Class 4-A state championship in 2016). So, it’s never a happy ending for those seniors.”

Patterson is already taking nursing classes at Forsyth Tech and will take her CNA test on May 25. She should get the results the day after.

Patterson, in addition to working in nursing at Forsyth Tech, plans on going there in the fall and remaining there to get her associate’s degree. After that, she said she will either transfer to a four-year college or go into the Air Force and become an in-flight nurse.

“The crazy thing was I took the class because I wanted to become a vet(erinarian)” she said. “And it was a way to get a good start, and just the general biology of the anatomy. But the more I took it the more I realized that nursing would be good for me because I think I could put smiles on people’s faces.”