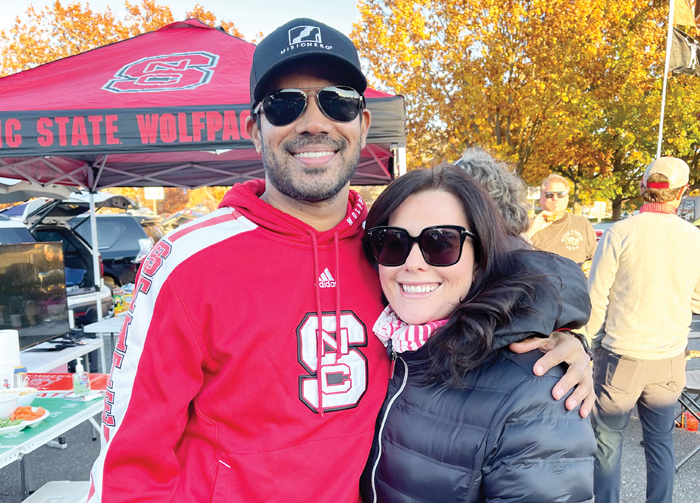 Rebecca Desai and her husband, Deval

Rebecca Desai spent her childhood on a 200-acre hobby farm in western Massachusetts with her younger sister and parents. “I don’t think I fully appreciated all of the hard work that my parents put into it until later in life. My dad worked full time as a nuclear chemist, and my mom was a nursing home administrator. Before they went to work and after they got home, they took care of all the animals and tended to the expansive vegetable gardens that fed our family. We had a special room for all of the canning that my mom did from peaches to tomato sauce for our pastas,” Desai said. “You could say that we were homesteaders. I didn’t think anything of it when my dad slaughtered a pig, turkey or chicken for us to eat. That’s all I knew growing up.”

Desai loved the peace and quiet that came with farm life.

“Because we had so many animals around, it didn’t take long for me to fall in love with horses. From the fifth grade on, I invested most of my free time with showing my horses. I was particularly fond of quarter horses and stuck with my love for showing them until my first year of college,” she said.

“I had attended a boarding school during high school that was known for riding, so it was a great fit to cultivate my passion.”

When Desai graduated from high school, she chose to attend the University of Massachusetts Amherst.

“Initially when I started college, my intent was taking over the family business my grandparents had started which was owning a nursing home. My grandmother was a young mother when my grandfather passed. I admired how she was able to take care of her children, including a son with disabilities as a single parent and grow a small business. I saw my mom take it over, and thought I wanted to be a part of it too,” Desai said.

However, Desai was deterred for two important reasons. “As I entered college, the healthcare field was changing, and my mom thought some of those changes were negatively impacting the nursing home. I also met my future husband, Deval Desai. Deval was a tennis player at North Carolina State University, and my cousin was also a Wolfpack athlete. Deval and I hit if off instantly,” Desai said.

“After meeting Deval and not loving dorm life, I had the opportunity to live with my grandmother while I finished up my freshman year,” Desai said.

“Her house was just about 10 minutes from campus. Living with my grandmother was the most amazing thing ever. She spoiled me during that time. She was still working at the nursing home. Her wisdom was still at its peak, too. I soaked it up.”

After Desai’s freshman year, she decided to make a change in schools and majors.

As Deval graduated from NCSU and began optometry school at the University of Pennsylvania, Rebecca decided to transfer to St. Joseph’s University so they could be in the same city.

“I’m so glad that I did for several reasons,” she said.

“I ended up with a great professor that encouraged me to go into food marketing. Ironically that professor ended up moving down to Winston-Salem to teach at Wake Forest University.”

Excited about her new career path and degree, Desai accepted a job with C&S Wholesale Grocers to work as a national buyer in 2006 in Massachusetts.

“I was buying apples and pears, and I enjoyed the industry so much,” Desai said.

Although Deval and Rebecca had decided to initially move back to Massachusetts, they decided to move to North Carolina to be near his family in 2007. Deval’s father had gotten sick with leukemia, and Deval planned to move back and help care for him. Unfortunately, Deval never got the opportunity to do that because his father died while he was enroute to North Carolina.

Deval and Rebecca still continued with their plans to live in North Carolina. They were engaged shortly after Deval’s father passed away and married in 2009.

“Deval’s brother and mom lived in Charlotte, so we knew we wanted to be close to them,” Desai said.

She was able to find jobs in her industry that allowed her to work remotely.

“Before Deval and I had our two children (Arjun, 7, and Vera, 3), I had jobs that required a lot of travel. I spent a good amount of time networking and learning the ins and outs of sales within Stemilt as a merchandising manager and Misionero Vegetables as a sales manager.

“Once we decided to have children, I took a position that required a lot less travel. I’m now working at C.H. Robinson as a national sales manager. My main focus is getting vegetables, especially lettuce into retail stores. The best part of my job is that it excites every person I talk to. No matter how successful someone is, they enjoy hearing about fresh produce, and I enjoy reciprocating that excitement,” Desai said.

“People are so inquisitive about how it’s grown, the health benefits, and how to enhance flavors. One of the most common questions I hear is if it’s really organic. I don’t think people realize the regulation and audits that are required to ensure it really is. The FDA ensures what is sprayed, when you sprayed it, and who sprayed it.”

Desai has appreciated that she’s able to continue her passion in the food marketing industry while raising her two young children.

“Being a mom is so rewarding yet it’s so difficult. You always question yourself at every turn. I have loved watching them grow up and have such a feeling of pride in them,” she said.

“Family has always been very important to me. Even when Deval started his own independent optometry practices in Lexington and Mocksville, Desai Vision, he still ensured he was able to participate in our kids’ activities and support their interests. Much like my grandmother and mom did in their business, he likes having the opportunity to do things the right way because he makes the decisions. He really cares. I respect that about him. And as parents, knowing we have two little ones watching what we do, how we treat people, and our work ethic, we want to set the type of example we both felt lucky to have as kids growing up ourselves.”