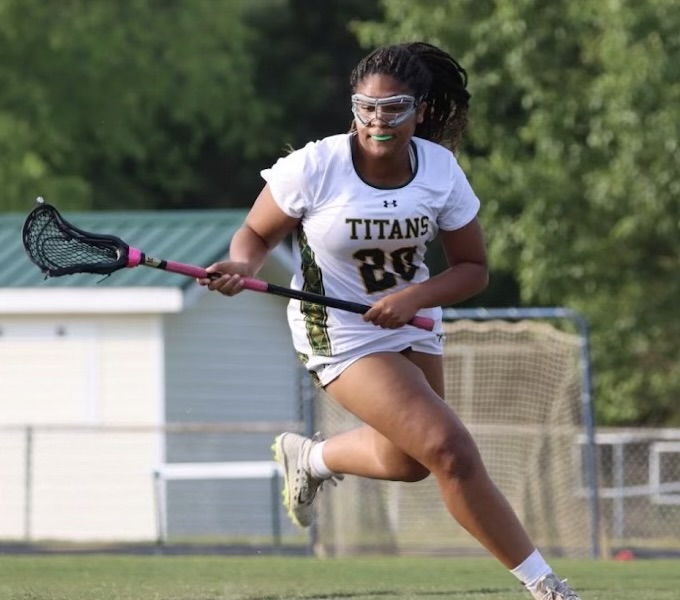 Playing basketball most of her life, lacrosse came to senior Jaylah Gray of West Forsyth well into her teenage years.

But’s that’s OK by her. After all, she’s blossomed into a top-notch player for the Titans, and has excelled to the point where she has signed to play in college at UVa.-Wise.

“I played basketball all my life, and then my freshman year of high school the assistant basketball coach was the JV lacrosse coach (Aaron Jessup),” Gray said. “He said, ‘Hey, you should come and try out for it. I think you’ll be really good.’”

The sport of lacrosse was foreign to her.

“I didn’t know what the sport was. I had never heard of it at all,” Gray said. “When I first saw it, I was like, ‘This looks crazy. Who is using this small stick to play a sport with?’

Coach Doug Brawley of West Forsyth took Jessup’s advice to find a spot on the team for Gray.

“First of all, I think it definitely benefits kids to play multiple sports,” he said. “I think it helps them develop as an athlete no matter what game they’re playing. So yes, I encourage them to play other sports to still give them the time needed for lacrosse. But if they want to go play basketball, if they want to go play soccer, or whatever it may be, we encourage that.”

As an experienced coach, Brawley sees the similarities in the two sports.

“We get a lot of girls from basketball, along with field hockey, are probably our two biggest areas that cross over,” he said. “Basketball, especially, because you talk about some of the terminology — man-to-man defenses, zone defenses, picks, passing lanes, give-and-gos — there’s all kinds of terminology that these people, if they play basketball, they arrive, even if they’ve never touched a lacrosse ball in their life, their understanding of how to play a zone defense is already there.”

When Gray first stepped on the field with more experienced lacrosse players, she felt intimidated.

“I almost didn’t continue with it because I’ve never played a sport where like I was the worst player,” Gray said. “And I though, ‘I don’t want to do this.'”

“After a while my mom signed me up for summer camps and I gradually got better.”

“It comes to being an athlete and being someone who takes the time at whatever they’re learning to do,” Brawley said. “If you put the time into the sport, be it lacrosse or basketball, or math, you know, you’re going to benefit from your hard work. And the same thing goes with what Jaylah’s done.

“She’s definitely put in the time and the work.”

Not only was she a novice to the sport, but Gray started playing with a really successful team.

“Initially, when I first started it, I knew that there had been people before, who played for my school that had gone off to college and played,” she said. “So, I knew that I also had to give credit to the team itself, and to those people, for being able to do that. So, I knew that the team was good, and we had always won conference from what I heard, so I knew that we were a pretty team.”

As she learned the game, Brawley decided to make her a defender.

“Jaylah’s athletic ability allowed her to progress very quickly in the sport,” Brawley said. “And I wanted to get her on the varsity field quickly. However, her stick skills were not as advanced as her physical ability, such as playing defense. Her stick skills continue to progress and have gone through such that she’s now capable of playing anywhere on the field. Those results will help her carry her game on into the college game.”

The switch for Gray was flipped in her sophomore year.

“My tenth-grade year was my last year playing basketball and I decided to play lacrosse full-time,” she said. “I had (gone) from being a lover of basketball, and then after my sophomore year of playing lacrosse, and I started playing summer ball. I started playing AAU lacrosse. I felt that lacrosse was starting to become my sport. I felt like I should put all my time and dedication into lacrosse.

“With lacrosse, I felt like I had more of an opportunity to be at the next level with that. And I had more time. I decided that I’m definitely going to put all my eggs into this one lacrosse basket and it worked out.”

Gray clearly had the mindset where she had one goal in mind — get better in lacrosse.

“I think it goes back to their determination, their attitude and their effort that they put forward,” Brawley said. “I tell all of my JV girls that the main difference between their game and the varsity game is that the varsity can catch and throw better, meaning I give them something that they can physically take the time and put in the effort and they can achieve their goal.

“They can play varsity. Some just take longer than others. But if they truly want to be on the varsity team, and if they want to start for the varsity team at West Forsyth, they can achieve that by learning to throw and catch at a higher level than their teammates.”

Gray made marked improvement between her freshman and junior seasons.

“Freshman (year), she started off mostly JV,” Brawley said. “We moved her up for some exposure at the varsity game. But junior and senior (year), definitely. As a senior, she was elected as a team captain by her peers, which speaks volume to her teammates also recognizing her abilities and her leadership.”

This past season, she was a co-captain with Brooklyn Fox.

“Jaylah’s someone who is not all talk,” Brawley said. “She speaks through her action. She’s not going to tell you to just do something. She’s going to get out there and do it. She’s the kind who wants the ball in her hands at the end of the game. She’s not going to shy away from competition. She’s going to go toward the pressure, go toward the challenge. So when things are tough, the game’s on the line at the end of the game you know Jaylah’s actively going to be involved.”

Last year, Gray’s junior season, West Forsyth finished 12-1 overall, and 10-0 in the Central Piedmont 4-A, losing only to Weddington in the second round of the NCHSAA playoffs.

“Playing my junior year, it was kind of tricky with all the restrictions with COVID and everything,” she said. “It was a little nerve-wracking to try to make sure that everybody stayed safe and healthy. But honestly, I felt pretty good about it because over the summer I played AAU ball, So, I still had my stick in my hand, still getting good work in. And I did that for all the summer. I was pretty in shape.”

Despite the loss to Weddington in last year’s playoffs, West Forsyth had high hopes for this past season. Those high hopes came to fruition because the Titans finished 18-3 overall and 11-1 in the conference.

“To be able to accomplish all that we accomplished with a new team that had a bunch of incoming (players), and we lost a good amount of good players last year, I feel that we did very well for everything considering,” Gray said. “Especially with how the year has gone. I’m very proud of us as a team.”

West Forsyth was undefeated until spring break. However, its first game back was against Reynolds on April 19, which West lost 10-5.

“I think we should have spring break in the fall, and that’s a joke, because we’re right in the middle of lacrosse season. Everything is going well. We’ve got a good roll going on,” Brawley said. “And all of the sudden we have to take a week off. And all the other schools are out and we can’t get any games. And it’s a matter of which team gets going back to normal the quickest. And this year it was a little tougher for us.”

“It was pretty disappointing,” Gray said. “Some people were crying. I personally wasn’t because I was like, ‘You know, sometimes it’s takes you being knocked off that (pedestal) just to realize that you have to put in more work, and make you realize that, hey, this isn’t something that’s just common. You really have to work at this if you want to be successful.'”

“I wouldn’t say it was deflating,” Gray said. “I think that we went into knowing that, hey, this could be our last game, and already knowing that we had won the conference championship, and knowing that everybody was pretty tired at that point, as well. I felt that we just went out there and we played the best that we could play, we had fun, and there was really not much we could do about it.”

As a coach, Brawley sees seniors walk off the field for the last time after each season.

“I guess it’s a sense of pride for me,” he said. “You see if every year that these girls, especially the ones that have been here four years, that they’ve stuck with something that they’ve, how much they’ve developed, how much they’ve grown, how much they’ve learned to work as a team, to care about each other, to play as one unit. Those are the things that important to me, not necessarily just the individual skills, but more the team aspect of the game.”

“When I walked off the field, I really did feel like, ‘now it’s over,'” Gray said. “But you know it felt very rewarding to know this isn’t the last time, I will continue playing. I guess that also gave me that relief, as well.”

Gray will be playing in college at UVa.-Wise, an NCAA Division II school in Virginia.

“I chose Wise because the coaching staff is phenomenal,” she said. “The people there, just the ones that are in the atmosphere of being at Wise is very nice. I like that the focus is more on mental health rather than have players that just have to win, we have to win, whatever you do to win. I really like that part.”

After finishing college and playing lacrosse, Gray wants to become a physician’s assistant.

“Back when I was in the fifth grade, my grandma died of cancer,” she said. “And she used to live with me because she had to go to Baptist (Hospital). And I used to help her administer all of her medications from home. I took care her when my mom used to go to work. And ever since then I just love the idea of helping people and just being a medical professional.”

She even has a specialty that she wants to focus on as a physician’s assistant.

Gray hasn’t worn the green and gold at West Forsyth for the last time. She’ll get a chance to wear it again in June with her cap and gown at graduation.