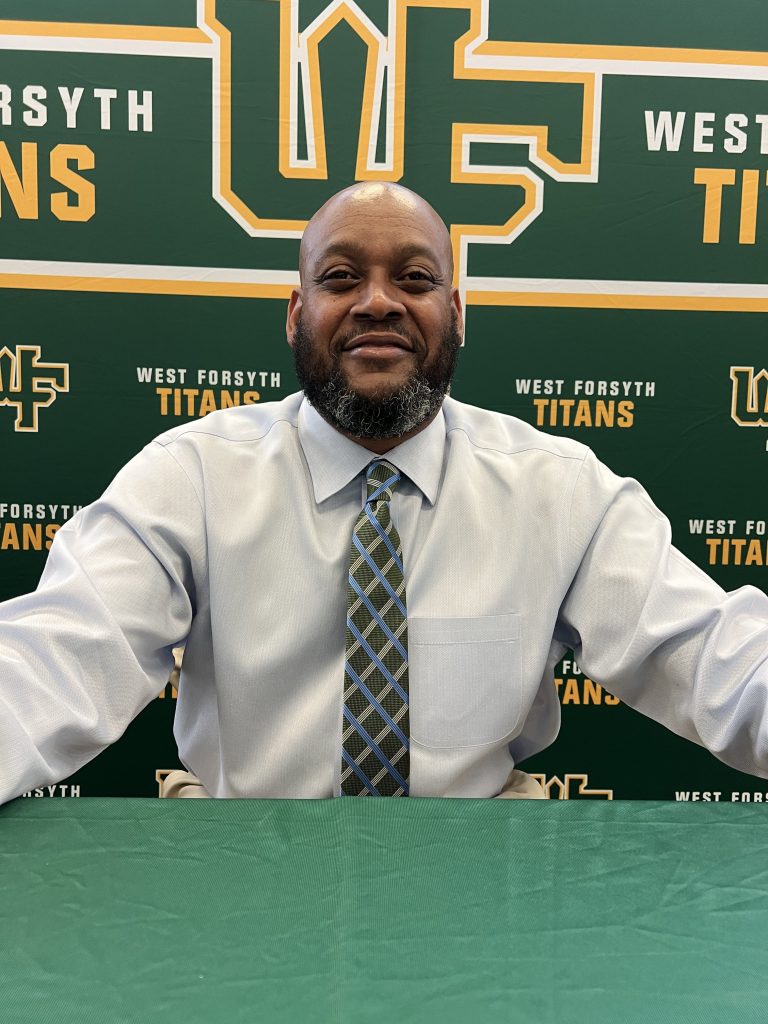 Brim was 96-76 in seven seasons at Atkins, including an 86-38 record over last five seasons

Brim planned to hit the hardwood running and laid out expectations and a summer schedule for his new team, which included workouts for last Thursday and Friday.

“If we’re not in the gym, we’re not getting better,” Brim said. “And there’s a lot I need to learn about these guys while I’m getting to know them. We have a lot of work to do.”

Brim said that he had already seen some game film from last season and had the summer already mapped out with workouts and team events.

“Just because you are here for workouts or go play in one of those team competitions with us does not mean you have a spot on the team next season,” Brim said to the 40 or so hopefuls and their parents who attended the gathering.”

He also offered a warning: “If you’re not doing your classwork, don’t come out for basketball. If you’re one of those guys who’s going to skip class, you won’t play for me.”

After spending the last seven seasons at Atkins, where his teams compiled a 96-76 record, including an 86-38 mark over the last five seasons, Brim admitted that leaving the Camels was a difficult decision to make.

“Atkins gave me my first opportunity as a head coach in high school and I’ll always be grateful for that,” Brim said. “But being from Winston-Salem, West Forsyth has always been one of those ‘dream jobs’ for me once I started coaching. I was at Atkins for seven years and we were able to build something that nobody thought we could build there. Having that conversation with those kids was something I didn’t look forward to. As the day went on, I got more and more nervous about it. Telling those guys that I was leaving Atkins was the toughest thing I’ve had to do as a coach.”

Pennington’s familiarity with Brim was a plus, but Pennington also said that Brim stood out during the interview process.

“He came in with a plan to help us rebuild the program,” Pennington said. “I’ve always known that he’s great with kids and great at skill development. He’s built his own program and I think he can rebuild this one. It was very important to have him in place now with everything coming up. We knew these kids needed to meet him and find out what it takes to play for him. I’m thrilled we got it done as quick as we did.”

Brim also has some ties to the Titans’ basketball past. He has coached in Chris Paul’s AAU organization and mentioned Chris and his brother, C.J., in his comments.

“The tradition is here,” Brim said. “It’s just about your dedication and being willing to be coached. There is talent in this building. We have to take that talent, form it, and make them into the players and young men that we want them to be.”

Kevin Spainhour, the principal at West, got some up-close experience watching Brim on the sidelines. Atkins and Spainhour’s former school, West Stokes, clashed every season when the two played in the same conference. Spainhour’s brother, Dan, coached the West Stokes team.

“His team’s always played hard, always played the right way and were always well prepared,” Spainhour said. “Beyond that, you can tell when coaches really have that connection with kids, and I could see that. He got that head coaching job after being an assistant coach for many years and really ran with that. We’ve had four coaches in eight years now, and I think he’ll provide some consistency for us. He’ll provide that passion and spark that our program will benefit from long-term. Not only did the x’s and o’s stand out during the interview process, but also the plan he had to build the program back up.”

Brim admitted that during his playing days at Carver (graduated in 1990) and then at N.C. Central, he never envisioned himself becoming a coach.

“I started coaching a middle school team when I was in Durham and that kind of changed everything,” Brim said. “I picked up some AAU teams along the way and moved back here in ’98 when the opportunity at Parkland came around.”

Pennington and Brim guided the Mustangs to an NCHSAA 3-A state championship in 1999 and then a runner-up finish in 2002.

“Pennington taught me about style of play when I was at Parkland with him, and a lot of that is what I’d like to bring here,” Brim said. “That’s what we did at Atkins. He really allowed me to grow as an assistant coach, allowed me to have input and taught me how to be more organized. We coached them hard, loved them hard, and were always there for them outside of the gym.”

Once he joined the staff at Carver under Piggott, Brim added some new wrinkles to his coaching philosophies.

“Dan is my best friend and coaching with him was easy for both of us because of that existing relationship,” Brim said. “We knew the most important thing for us was to make sure we were there for those kids at any time.”

Brim played for legendary Coach Alfred Poe at Carver and said he still calls on him frequently.

“Coach Poe brought a lot of discipline and that work ethic in every day,” Brim said. “He instilled that mentality in us, and he would hold us accountable. In turn, we held ourselves accountable.”

Brim will also bring one building block with him from Atkins.

His son, Jacari, was the starting point guard as a freshman for last season’s team.

“If you watched us at Atkins, we played full-court man, we pressed and we played with tempt,” Brim said. “That’s the same way we want to play here. We want to create more turnovers and more possessions.”

Wanna step outside? The plight of flounder and red…