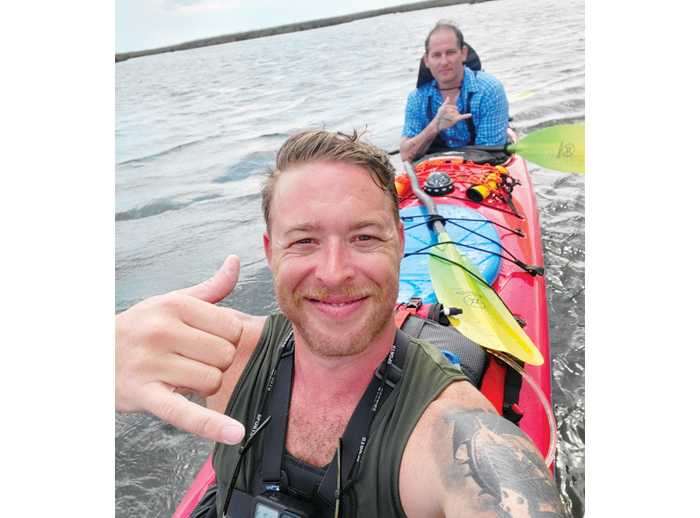 Brock Dick and Keith Menefee in their kayak. The duo is paddling the Intracoastal Waterway to raise money for the Gary Sinise Foundation.

Brock Dick describes himself as someone who seeks out new challenges and opportunities for personal growth.

Dick, a 2008 graduate of West Forsyth, is several weeks into what he hopes is a six-week venture down 800 nautical miles of the Intracoastal Waterway.

In a two-person kayak.

Yes, you read that right.

Dick, who has served in the Air Force National Guard since 2010, and his friend Keith Menefee, a retired member of the military, are doing so to raise money for the Gary Sinise Foundation, which provides services and programs for wounded veterans.

Sinise co-starred in the movie Forest Gump as Lieutenant Dan.

Dick and Menefee wanted to see the money raised from their voyage benefit the RISE division of Sinise’s Foundation, which builds smart homes for quadriplegic veterans.

“We’re all about helping our disabled veterans and set a goal of $50,000,” Dick said. “We both come from families that have a fair amount of military representation and we felt like it was important for us to tie that in. We’re lucky that the Sinise Foundation was willing to jump in there and support our efforts.”

Where did these two gentleman craft this idea for their adventure?

“It actually started out as a conversation about doing it on jet skis,” Dick said with a laugh. “Then we got the crazy idea to do it on a kayak.”

The tandem set out from Pungo Ferry, Virginia, on May 3 and hope to arrive in Fort Pierce, Florida, in about six weeks. They are equipped with a GoPro camera and have set up social media pages on Facebook and Instagram.

They’ve already faced strong waves, high winds, various sea creatures and a Nor’easter, which was sitting off the Atlantic coast soon after they began their journey, which they are calling the “Atlantic Ditch Run 800.”

“That part of the Intracoastal is sometimes referred to as ‘The Ditch,” Dick said. “We have a goal of doing 20-25 miles per day, or about six to eight hours, depending on how we manage that long of a sit in the kayak. A lot of our progress will also be weather dependent. A lot of our friends have told us that it sounds a lot like hiking the Appalachian Trail.”

Dick said that they have backpacks full of protein bars and other snack items they can eat while they are on the water, but also head into towns to find restaurants when they reach a stopping point during any given day.

“We’re talking it up in every marina or town we stop in,” Dick said. “We’ve had a lot of great support and met a lot of great people who have offered to help us in various ways. We’ve got 15 pounds of Cliff Bars and two backpack stoves if we need them. We’ve got about 4-5 days of survivability with our food and water supply should we need it.”

Dick said he and Menefee met when they were both on assignment in Africa and instantly hit it off.

“He told me to look him up once he was retired from the military and we could plan this out,” Dick said. “That was in 2020. So, I reached out to him and told him it was time, and it has now become our reality.”

They are closing in on the finish line, which will be at Little Jim Bridge in Fort Pierce. Dick said that they plan to have a grand celebration for their accomplishment.

“In the final two days, we have invited a bunch of other kayakers to hop in the water and finish the trip with us,” Dick said. “When we get to Little Jim Bridge, we plan to ‘storm the bridge’ and take it over, then get out and celebrate crossing that finish line. We are both super excited for that. We still have a long way to go, but we are super excited to get to the finish line.”

Dick laughed when asked if they both planned to paddle the kayak back home once they get a little rest in Fort Pierce.

“I’ll probably fly back and enjoy some sunshine when I get home and I know Keith has some business interests in Florida he will look after,” Dick said. “I’m not sure our arms could last for another adventure like this. But it will all be worth it. For the challenge of doing it and the adventure and for the awareness for the Gary Sinise Foundation, it will be well worth it.”

Links are on the pages to the Sinise Foundation.