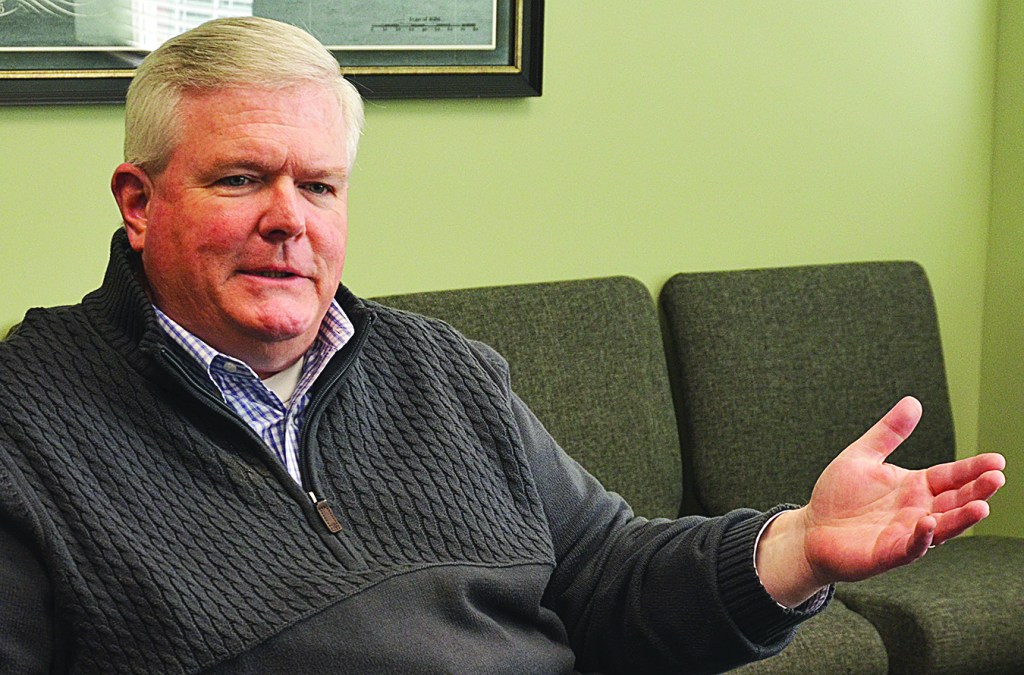 Meadwell not having to move far as his replacement

For Bermuda Run, it’s a time of transition with Lee Rollins, the longtime town manager, announcing his plans to step aside at the end of June and Andrew Meadwell, senior planner and director of Davie County Development and Facilities Services for the past 18 years, being hired as his replacement.

Rollins said he’s not getting any younger and wants to explore what might be next after leading Bermuda Run’s government since August 2009.

“I’ve been thinking about it for some time, Melissa and I, and our daughter is headed off to Appalachian in the fall,” he said, “and I’ll be 56 in October, and if I want to do something different, then now is the time to do it. I don’t know exactly what that is. I have some things in mind but nothing to announce yet.

“With us updating our Comprehensive Plan, I think Andrew has been sort of looking for an opportunity, so to be able to keep him in the community is a win-win.”

Prior to the announcement, Rollins said he talked with Mayor Rick Cross on several occasions and had some one-on-one sessions with the council.

“I had some discussions with the mayor and some one-on-one sessions with the council,” Rollins said. “I just didn’t want to surprise them, so from that point, there was a special meeting.”

Meadwell will take over as town manager on July 1. Meanwhile, Rollins will present the 2022-23 fiscal year budget in his final council meeting on June 14, and his last official day will be June 30. However, he will remain as a consultant for a period of time, as needed, with Meadwell acclimating to his new position.

Rollins, who lives in Mocksville and worked previously in the private sector, said he plans to stay in area, adding, “My wife’s family owns Daniel Furniture & Electric, and I’ve got a mom who is her late 70s living by herself now within a stone’s throw of the house.”

While Bermuda Run is currently working on another update for the town’s Comprehensive Plan, Rollins said he was “very pleased that the council early on and Mayor (John) Ferguson wanted us to make an investment in putting the Comprehensive Plan in at the time.

“In so many respects, that just sort of keeps everybody on the same road. You can move and turn and pivot, but I believe good government is predicated on just some common principles and strategies.”

“I feel very fortunate that I’ve had three mayors that have seen fit not to fire me. I have worked well with all of them. They’ve all been accomplished in their own right. We’ve got a special group here in Bermuda Run.”

Mayor Rick Cross said that Rollins had been talking to him for a period of time about what his next chapter might look like.

“He had been with us for almost 13 years, which is almost double what a typical town manager does, so I feel very fortunate that we had Lee for the time we had him,” Cross said. “When you look around this town, so much of it has his fingerprints on it. He has been responsible for so much.”

Rollins said he feels comfortable handing off the reins to Meadwell, who has been a presence in many council meetings while serving as the planning and zoning administrator for the towns of Bermuda Run and Mocksville.

Cross added he has worked a great deal in the past few years in his role as mayor and previously as a council member with Meadwell.

“I have a lot of respect for Andrew,” Cross said. “He’s got a wealth of knowledge of our community, and he’s been working with us and has been engaged with us. So I think the transition is natural. Andrew has had an interest in moving into management, and specifically this is a great fit for him.”

Cross said that the council went through the process on how to move forward after learning of Rollins’ decision to leave and reached out to the Piedmont Triad Regional Council, finding “they were being inundated” with municipalities looking for managers.

However, as it turned out, the town didn’t have to look far to find an ideal fit.

“I feel like we’re very fortunate if we’re going to have Lee exit and that we have Andrew coming in to replace him as the manager,” Cross said. “And I think the important thing is that Lee is leaving with lots of notice. I want to make sure that as we’re going through this transition that we are working with the county as well because they do a lot to work with us and support us, so Andrew in his role is leaving and Amy (Flyte, former senior planner who accepted a position as the assistant village manager in Clemmons) is as well. We’ll be working with the county commissioners and Mike Ruffin (interim manager) to make sure the transition is as seamless as possible.”