North Carolina had more than 4,000 students compete in 13 state-wide Junior Music Festivals sponsored by the National Federation of Music Clubs for 2022.

The Wake Forest District, which includes students from Lewisville, Pfafftown, Advance, Clemmons and Winston-Salem had 486 entries. Winners in the upper level events of piano, voice and strings continued on to the NFMC state finals at UNCG.

Beginning in 2022, a Sacred Music Piano Solo Scholarship was added to the list of 19 scholarships offered annually by the NC chapter of NFMC. This new scholarship is an endowment given to NCFMC and sponsored by Allen and Teresia Queen. Katelynn Beadle was the 2022 scholarship winner and Jeffrey Lyons received a cash award as first runner up. 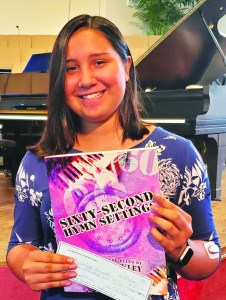 Beadle is the daughter of David and Jeanette Beadle and is homeschooled and a rising high school freshman. She attends The Church of Jesus Christ of Latter Day Saints in Clemmons, where she is able to share her talents on the organ and piano for worship. Her winning NFMC competition music included “Come Thou Fount of Every Blessing” and “My Faith Looks Up to Thee.” She received a winning score of 100 on both her local Wake Forest event, as well as her UNCG state finals event.

Beadle was invited to perform at the prestigious NCFMC Winner’s Recital held in May in Statesville with other winners from across the state.

Beadle’s other interests include playing the guitar and ukulele, reading, writing, journaling, drawing, swimming, archery and building things. She loves trying new things and learning everything new that she can. She especially enjoys any outside activity and learning about animals. 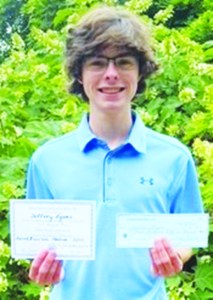 Lyons earned the first runner up spot for the new Sacred Music Piano Solo scholarship and received a cash award. He is the son of Mike and Karen Lyons and is a rising senior at West Forsyth High School.

Lyons is an active member of Clemmons Presbyterian Church, its youth group and is a youth church musician, often playing for Sunday worship services.

In addition to music, Lyons enjoys playing golf and tennis and plays on the West Forsyth High School tennis team. He is also a member of West Forsyth’s Key Club, Men’s Service Club, Speech and Debate Club, the Fellowship of Christian Athletes and sings in the school chorus.

Hymn playing is another of the many NFMC state finals categories. There are five classes in this category and two local students won two of the five classes. 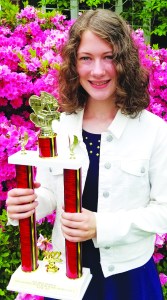 Elizabeth Hamilton is a student of Lynne Spach, and won the highest level of hymn playing categories offered by NFMC — the John and Jonsey Queen Level V NFMC Hymn Playing event and state title for 2022. Her winning competition music included: “And Can It Be” and “How Deep the Father’s Love.”

She is homeschooled and just completed her 10th-grade year. Hamilton is the daughter of Kevin and Kristen Hamilton and attends Grace Free Presbyterian Church.

In addition to playing the piano, Hamilton’s interests include violin, running on track and cross country teams, reading and writing.

She is a longtime member of NFMC and just this year also earned her 30-point cups in the events of piano solo and hymn playing. Thirty-point cups represent six years of earning a score of superior in each event.

The Carolyn Jones Summerlin State Hymn Playing award and state title were won by Beadle for the level of Class II. Her winning selections were: “When I Look Into Your Holiness” and the contemporary “Mighty to Save.”

She is a four-year member of NFMC and has previously earned five NFMC gold cups and was the 2021 1st runner up for the state title in Class I hymns. Beadle competes in many NFMC events, including piano solo, piano concerto, American patriotic folk songs, music theory as well as the two categories in which she was named the state winner for 2022.

Lyons was named as the second runner up in the Class IV Peggy Robinson Matthews Hymn Playing Cup for 2022. He has earned 10 gold cups representing excellence in music from the NFMC and won the state titles in Hymns Class I and II in 2019 and 2020. His competition music for 2022 included a gospel favorite, “Rain Down” and Michael W. Smith’s “Great is the Lord.” Lyons will be attending college in the fall of 2023 and will be seeking a major in environmental and/or political science.

Beadle and Lyons are members of the music studio of Teresia Ann Queen, whose studio has been a 16-year member of NFMC, the largest nonprofit organization in America promoting and supporting American music, performers and music education since its founding in 1898. To learn more about the NFMC on the national and state levels, go to www.nfmc-music.org.