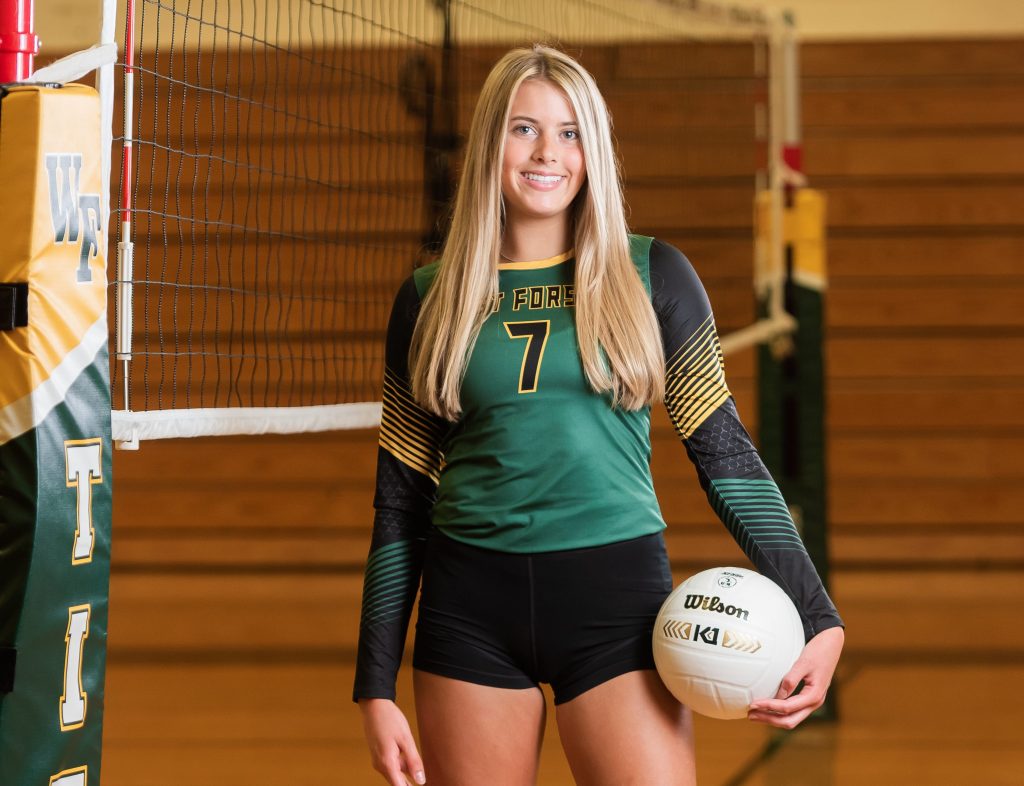 Yasmin Leonard photo Clara LaRue was selected as the 2021-22 West Forsyth Female Athlete of the Year. She will be playing college volleyball at Elon.

The LaRue family has always made headlines for their renowned athleticism, but over the past four years the spotlight has been on their youngest, West Forsyth senior Clara, this year’s recipient of the West Forsyth Female Athlete of the Year award.

“I’m so honored. We have so many incredible female athletes at West who all work extremely hard. As athletes, we work hard for our team and push ourselves to improve for our own goals and achievement, but to be recognized for this hard work feels really good,” LaRue said.

LaRue started playing on the varsity volleyball team her freshman year and proceeded to receive All-Conference honors all four years. She helped the Titans win the Central Piedmont 4-A Conference Championship her sophomore (2018) and senior years (2021). She was also the team captain and held great influence on the team.

LaRue will be attending Elon University this fall for her obvious talent, but also her strong work ethic and focused mindset.

“She is a well-rounded package of an athlete when you consider all of the components that you look for in an athlete. She has the internal pieces… she has the things that are not tangible, and sometimes that can boost you above people who have the tangibles,” Gillon said.

However, her volleyball career at West hasn’t all been smooth sailing.

During a game against East Forsyth her junior year, LaRue broke her foot and decided to play through the pain until it was unbearable.

“She played two matches on a broken foot and gave 100%. That was completely her decision to play. She said she felt like she could do it… that was a defining moment as an athlete. She was clearly in pain, her foot was black and purple, but she felt like she needed to do that for her team,” Gillon said.

Following those few pain-filled games, LaRue wasn’t completely healed until her senior year, but felt that she was able to redeem herself, leading her team to victory against East Forsyth this past season.

“I had to work at building back my strength and confidence on the court, so being able to come back my senior year and beat them for the conference tournament was really rewarding,” LaRue said.

“It was amazing and getting to celebrate with my team that I love so much for my last season meant a lot to me.”

Given her physical abilities, work ethic and history of overcoming adversity, it will be no surprise to see LaRue lead Elon volleyball to new heights in the years to come.

“Just watching her grow and evolve — she’s always been a great volleyball player —  into a solid leader and just a good person, ” Gillon said.

Janie Peterson is the sports editor for the West Forsyth Zephyr.

Wanna step outside? Already time to start thinking about…