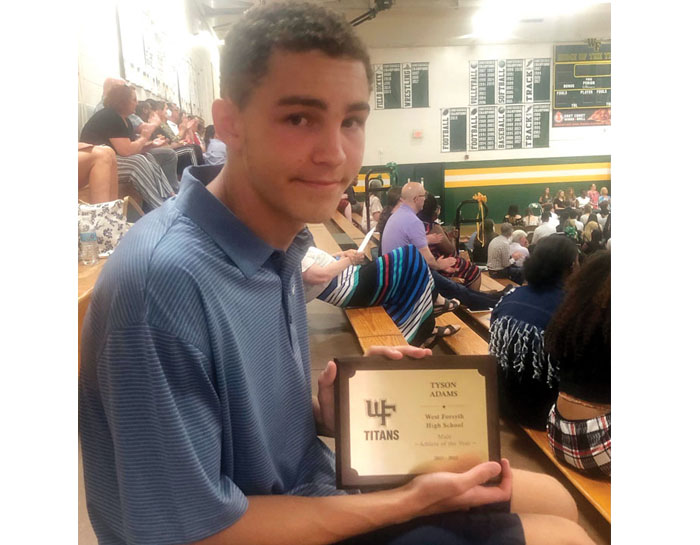 West Forsyth junior Tyson Adams began this school year as a baseball player who had never long jumped or even been a member of the track and field team.

He is ending this year with two NCHSAA 4-A state championships and the title of West Forsyth Male Athlete of the Year.

“Being Athlete of the Year is a true honor, and I will continue to work hard next year to become even better,” Adams said.

Adams’ first time competing in a meet produced a jump of 22 feet, 0.5 inches and placed him as the No. 1-ranked long jumper in the state.

“From a coach’s perspective, the most memorable moment was his very first meet when he told me how far he had jumped. He said it so nonchalantly, but we were all thinking, ‘For real?’” Coach Nate Newsome said.

Following this unforeseen talent, Adams proceeded to break the school record twice, become the men’s long jump state champion for indoor track in the winter and outdoor track in the spring, and excel in sprinting events as well.

“From then on out, I just tried to improve and get even further from that jump,” Adams said.

Next up is nationals, which will take place this summer June 17-19.

“I’m going to try to win nationals — that would be great because all I’ve been going up against right now is North Carolina competition, and nationals would bring in a whole bunch of other people,” Adams said.

Adams has proven to do well under pressure, evidenced by his outstanding performances in big meets, so nationals should be yet another celebration.

“I think the state meet was the first meet he might have felt pressure. Expectations were high and he was still able to win,” Newsome said.

It’s exciting to watch Adams exhibit his talent, but his attitude on and off the track makes him a stellar athlete and team member.

“He’s really easy to root for because he’s so humble,” Newsome said.

Luckily, West Forsyth will keep Adams for another year in which he will aim to break more records.

With the perfect combination of humility and high expectations for himself, Adams is sure to reach even greater heights next year and beyond as a collegiate athlete.

“It will be exciting to see what he does…He doesn’t really yet fully understand what his potential is, so I’m wishing him good health and being injury-free for next year because it will be interesting to see what happens,” Newsome said.

Janie Peterson is the sports editor for the West Forsyth Zephyr.