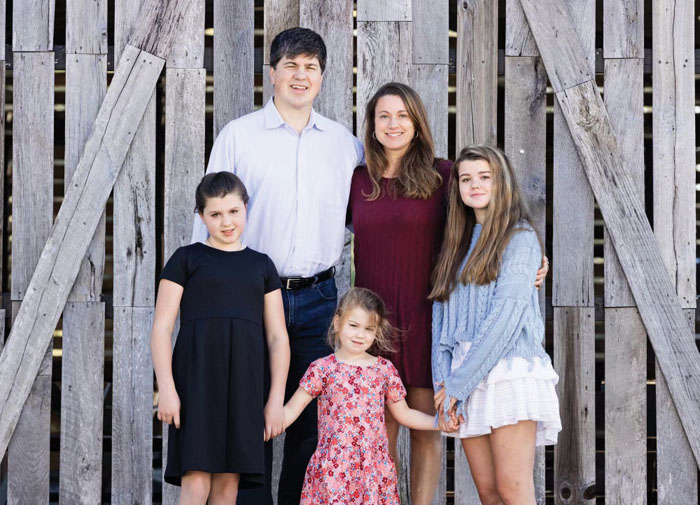 Dr. Helena Summers was born in Michigan before moving to Clemmons when she was 5. The youngest of three children, she treasured growing up in Clemmons West neighborhood.

“It was great to have independence as a kid in a safe environment. We would ride our bikes to the pool and there were plenty of friends to play with. My backyard was the Tanglewood horse pasture where my siblings and I would play outside all day every day,” Summers said.

If Summers wasn’t playing outside, she was participating in a sport.

“Whether it was the Aqua Demons swim team in the summer, Twin City soccer, or cross country, I really enjoyed sports,” Summers said.

A natural athlete with a strong work ethic, Summers dominated in high school sports at West Forsyth. Summers was a standout swimmer for the Titans, top cross-country runner, and offensive center midfield player on the soccer team. “Our soccer team was really a highlight from high school. We had such a great team that was cohesive,” said Summers, whose team won multiple conference championship titles.

Summers continued to play club soccer when she went off to college. “It was a nice way to meet people and still participate in a sport that I loved,” she said.

Summers had her choice of colleges from Dartmouth, Vanderbilt and Duke, to name a few. Ultimately Summers chose to stay in state and attend Duke University.

“It made sense to go there. It was fairly close and at that time I thought I wanted to be an engineer, which was a huge mistake,” Summers said with a laugh.

“I ended up changing my major to philosophy after my freshman year at Duke,” Summers said. “Ultimately, I always knew that I wanted to be a doctor since I was in elementary school. I have always looked up to my brother who became a doctor, too.”

During Summers’ time at Duke, she also worked in the medical field in various positions. “I had worked in a research lab at Wake Forest University for two years after high school when I wasn’t in school at Duke. I also worked at a local doctor’s office. My last year at Duke, I worked at a lab right before going to medical school that was very intense. I still felt resolute in the path that I had chosen,” Summers said.

When Summers graduated from Duke, she headed to the Brody School of Medicine at East Carolina University (ECU) in Greenville.

“Medical school was extremely difficult, but in a good way. I met some of the best friends of my life there, including my future husband, Erik, who was a resident. Surrounding yourself with good people helped alleviate some of the stress. I had initially thought that I wanted to be a neurologist, but my brother talked me out of it,” Summers said with a laugh. “I ended up leaning more towards going into radiology.”

After four years of medical school at ECU, Summers began her internship at ECU too. “I wanted to stay near Erik. It was one of the hardest years of my life. It was before the residency laws were in place, so I worked 80-hour work weeks,” Summers said. “During that year too, Erik and I got engaged and married.”

The newlyweds started their next adventure both medically and personally in Minnesota in 2005. Summers had received an offer at the Mayo Clinic in Rochester, Minnesota, to complete her residency.

“I loved Mayo. I think it was the ideal place to train because you’ve got people from all over that are such high caliber. I learned so much. I spent four years of residency and one year of fellowship in women’s imaging. I think until we had children, we thought we might actually stay there,” Summers said.

The Summers family welcomed their first daughter, Celeste (now 14) during Helena’s residency. “I took three months off to stay home with her, and then my mom came up for several months to care for Celeste. It meant so much to us that she did that and we also realized we needed to move home to be near family. I wanted my kids to have the same idyllic childhood that I was afforded,” Summers said.

Summers moved their family back to North Carolina in 2010 after the birth of their second daughter, Analiese (12). “While I moved back home to be near family, and had remembered such a great childhood, I was so impressed with how much this area had gotten even better. We were so excited to come back home to it all and now share it with our children,” she said.

Summers was welcomed into the radiology practice at Triad Radiology Associates where she has been focusing on women’s imaging. “While I practice in general radiology, my specialty is women’s imaging. Breast biopsies and mammograms are difficult because you have to have a certain eye. You also have to have good hand eye coordination. I like the complexity of imaging. I also like that I get to see patients. Not all radiologists get to do that. When you see the good that mammograms can do, it’s a great feeling. I also perform procedures which is something that I enjoy,” Summers said.

When Summers isn’t reading images, meeting patients or performing medical procedures, she can be found with her three daughters and husband. “Our third daughter, Vivienne (6) was born here in North Carolina. It’s been amazing raising our girls with their cousins. My sister is living in Clemmons West in our childhood house. She has kids that are 21, 19, 16, and 14 years old. Her kids will take mine places and babysit. I couldn’t feel any luckier for them to all be so close,” Summers said.

“Having family close by, and seeing your kids enjoy some of the things that you did as a child is such a joy. Celeste is doing travel and high school soccer. Analiese enjoys field hockey, lacrosse and basketball. Vivienne plays soccer and is gearing up for the summer swim team. So, we are staying very busy supporting their passions and activities,” Summers said.

“Erik and I do make sure to take time each year for a trip for just the two of us. We like outside activities. Pretty much anything that is adventurous we like to do together. Our plate is full right now, but we wouldn’t change one thing.”