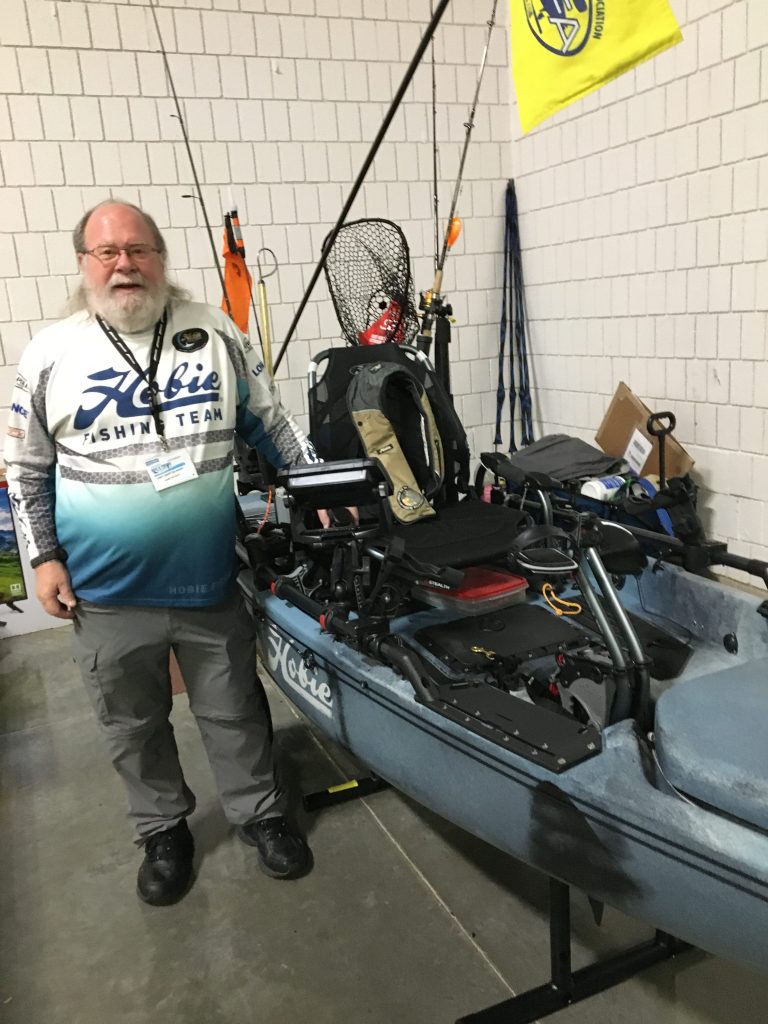 Go fishing almost anywhere these days, and you’re bound to see more of one kind of popular fishing vessel than you’ve ever seen: kayaks.
Smallmouth and largemouth bass, bream, crappie, catfish, red drum, flounder, speckled trout, bluefish, even Spanish and king mackerel are just a few of the species that kayak-bound anglers are regularly catching off the North Carolina coast.
Paddling anglers are among the fastest-growing group in the fishing market, and manufacturers of plastic boats and accessories have responded by thinking up all kinds of ways to put anglers in kayaks that are easier to maneuver and fish.
Jerry Dilsaver could easily say, “I told you so.”
Dilsaver, from Oak Island, is a former national king mackerel champion and a well-known speaker at fishing clubs and fishing shows all over North Carolina. He visited a club in Greensboro earlier this month, speaking at a monthly dinner meeting.
These days, he’s talking about kayaks as much as or more than anything — especially when he brings his personal 14-foot, Hobie kayak as a showpiece.
His vessel has pedal-power, meaning he doesn’t have to use a paddle; he pedals like a cyclist, and a pair of “flippers” under the boat’s hull to propel the kayak forward or backwards. There’s a top-drawer depth finder, a comfortable seat, multiple rod holders and space to hold tackle boxes and even live bait.
What is the draw? Well, price a 17-foot fishing boat lately? You’re likely to have to buy a model that’s 20 years or older to get down to the price of a kayak rigged as well as Dilsaver’s – and his is several times more expensive than most beginners will even consider. That’s part of it, but not nearly all of it.
“I really think the thing is, you’re doing it totally on your own, with just your kayak and gear,” Dilsaver said. “Fishing from a kayak, either you quit or you become a better fisherman, because you can’t pick up and run 5 miles to another spot; you have to learn to fish the water you’re in.
“We can get in water lots of boats can’t get into, and you can throw one right in the back of your truck, find a bridge over a creek that looks fishy, and slide it down the bank and launch. I have fished from mountain streams to 1½ miles offshore.”
Dilsaver advises newbies to start out in a kayak that’s not going to put any kind of strain on their budget — but not a piece of fiberglass trash.
“There are two ways to approach it,” he said. “If you are absolutely sure you’re going to enjoy kayak fishing, you’re probably wise to go ahead and look at an upper-level kayak. If you’re just exploring, you might be better served to find a good-quality, used boat. Don’t buy a $300 boat; get something with a little quality so you can see and decide whether you want to move up.”
When you’re hooked as surely as the fish you are targeting, then you can start considering something like the Hobie that Dilsaver runs in the ICW, coastal rivers and creeks and even out to artificial reefs off his Oak Island home.
“Do not get in a foot-propelled kayak unless you’re ready to buy one, because it will ruin you. You’re used to not being able to cast and paddle at the same time. With a foot-propelled kayak, you can — and you can even troll.
“The more I’m around the Hobie engineers, the more I think they’re the most-innovative group around.”

The N.C. Division of Marine Fisheries has certified the state’s first record pompano dolphinfish, and it may wind up being a world record, too.
Charles Noonan of Sumter, S.C., caught the 11-pound, 5.4-ounce fish around an abandoned raft about 42 miles off Ocean Isle Beach on June 8.
The DMF certified the record — the first ever for that species, which is a cousin of the Mahi-mahi, another colorful offshore battler that grows appreciably larger. A key difference is that pompano dolphinfish have compressed heads and dorsal fins that extend the entire length of their bodies — unlike Mahi-Mahi.
The existing all-tackle world record for pompano dolphinfish is an 8½-pound fish caught off the coast of Maryland in 2008.
Noonan’s fish was 30½ inches long and 17¼ inches in girth. He caught it trolling a dead ballyhoo bait while fishing with Salt Fever Guide Service out of Ocean Isle Beach.

More NCDMF news.
The agency finished disposing of 68 barge loads of material from the Herbert C. Bonner Bridge, which carries NC 12 over Oregon Inlet and was destroyed after being replaced by the Marc Basnight Bridge.
The 80,000 pounds of concrete went to augment a handful of artificial reefs: AR-130, AR-140, AR-145 and AR-160 off Oregon Inlet, AR-250 and AR-255 off Ocracoke Inlet, AR-3420 off Beaufort Inlet and AR-340 off Bogue Inlet.
The remnants of the Bonner Bridge was the largest amount of material associated with any artificial reef project in the history of the state’s artificial reef program.
Reefs off Holden Beach and Ocean Isle Beach received about 1,500 tons of recycled concrete pipe in a program funded by Coastal Recreational Fishing License sales. Most of the pipe was damaged during Hurricane Florence.
NCDMF has created 68 artificial reefs anywhere from just off the beach to 38 miles offshore. They serve as spawning and foraging habitat for many fish species.