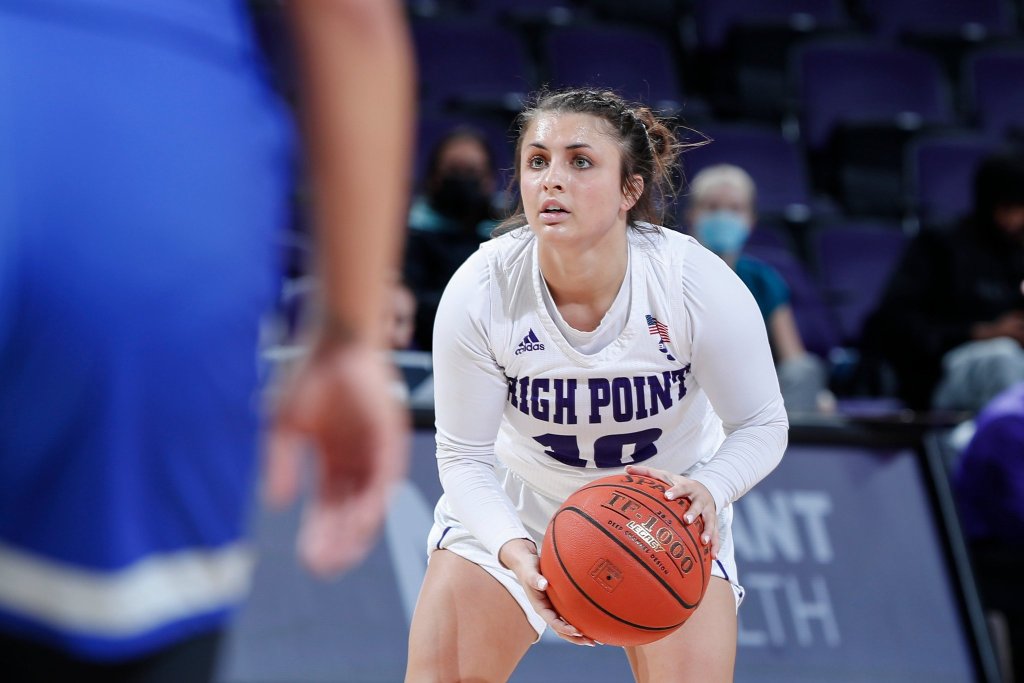 Many West Forsyth fans remember Callie Scheier for the NCHSAA Class 4-A championship run the girls basketball team made in 2019.

The indelible memory of Scheier scoring 29 points with the help of seven 3-pointers in the 4-A state championship game and being named MVP after West Forsyth knocked off Southeast Raleigh 47-36 in Reynolds Coliseum at N.C. State in Raleigh will be set in the minds of people forever.

Others remember Scheier as a 5-foot-2 guard, who will be playing her fourth season this fall at High Point University, as almost an extension on the court of former Coach Brittany Cox Hudson at West, where Scheier scored over 1,700 points and had over 500 assists in four seasons.

It should be no surprise that Scheier is taking the initial steps to become a coach after her playing career. That started this past spring with an internship through her sports-marketing program at High Point as an AAU coach alongside Katheryn Lyons with the 2023 Winston-Salem Stealers, where Scheier played from 2014-18. Scheier is also teaching skills clinics with Teach the Game. Both the Stealers and Teach the Game are based at The Maddawg Center in Kernersville under Brian Robinson, the founder and director of both organizations.

“I’ve always had a close relationship with Coach R (Robinson), so I needed an internship. And I want to coach when I graduate, so I thought he was a really good person to reach out to because he has a lot of good connections,” Scheier said. “So, once I reached out to him about doing the internship, he thought it would be a good idea to do some skills sessions.” 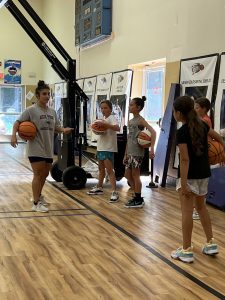 Marc Pruitt photo
Callie Scheier explains a drill to a group of players at the Maddawg Center.

Robinson was more than receptive to Scheier wanting to do this internship. As an alumna of the program, her photo, hand prints and signature are on the walls of the Maddawg Center.

“I’ve always kind of known I wanted to be a coach,” Scheier said. “Ever since I really started playing basketball, I had other ideas of things I wanted to do, but I just have always loved the game and it’s kind of stuck with me. I have a passion about the game, so I always stay around it and coaching is a great way to do that.”

“I’ve seen him at many different levels of football, so watching him do his thing, and just seeing the lifestyle and what it takes — he’s motivated me and encouraged me and kind of inspired me to watch to become a coach as well,” Scheier said. 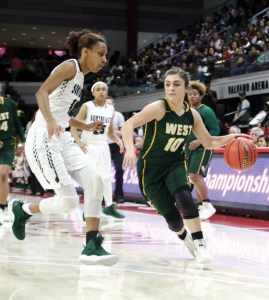 West Forsyth’s Callie Scheier drives against Southeast Raleigh during the 4A state championship game in 2019. She was named MVP after the game.

One of the basketball coaches that Scheier has had throughout her career is Chelsea Banbury, the head coach at High Point.
“Callie’s a smart player,” Banbury said. “She’s definitely a competitor, so I could definitely see her future as being a coach because she understands the game. And she knows scouting reports, and she knows what to do.”

Robinson decided to put Scheier on the same staff as Lyons, who played for Robinson at Bishop McGuinness and played Division I basketball at Maryland and Marist.

“She didn’t have any head-coaching experience. So, my thought was, ‘Yeah, I’ll be the head coach, but I want to giving her more and more opportunities as the season progresses to take on more,” Lyons said of Scheier.

That was exactly what Robinson was hoping for with the 2023 team, which includes Adelaide Jernigan, who is a rising sophomore at McGuinness and is already being heavily recruited.

“Things always seem to work out for the best always, and you just have to be patient. When the team was being thought of put together, I thought about asking Katheryn to head coach because she’d been there and done that,” Robinson said. “And she wasn’t sure she was going to be up for that or not since she hadn’t coached the program in a couple years, but she said if I have an assistant, I’ll do that.”

That assistant turned out to be Scheier.
“It’s been really cool to work with (Lyons) just because I knew she was a super-successful player and being able to coach with her, we’re very similar in the intensity and level of energy that we bring to practice and games,” Scheier said.

Scheier just turned 21 this past Sunday.

“(Scheier) knows how the game is progressing at the college level, as well, in terms of what college coaches want,” Lyons said. “She’s in college currently, and so she provides a lot of insider information how to train these girls, not to play outside their game, but develop them in a way that’s going to be more recruitable.”

With her size, Scheier has always wanted to prove the naysayers wrong.

“I think that for her in the end, that will help her be a good coach because you do have to know the game better, you have to be a smarter player, and you have to understand angles, and understand that a little better than somebody that’s taller,” Banbury said.

In addition, Scheier is just a few years older than the girls she’s coaching.

“I think they can learn from me and I want to help them learn and grow,” Scheier said. “And so, the age is perfect enough where they can respect me, but I’m also young enough where it’s like OK, a couple years ago I was playing in my last AAU tournament, trying to get recruited.”

So far, Scheier and Lyons have coached their team in tournaments in Roanoke, Va. and Raleigh. Later in July, they’re going to Louisville. Scheier will coach by herself at a tournament in Indianapolis and part of the tournament in Richmond.

“Callie’s up for the challenge,” Robinson said. “The only way you’re going to learn and make mistakes and get better as a coach is do it on your own sometimes and figure it out. If I didn’t have confidence in her I wouldn’t put her in that spot. And she’s going to be fine.”

The challenge of being able to coach by herself is not lost on Scheier.

“(Lyons) has a big-girl job during the day where the tournaments in July are literally during the week since it’s summer for the girls,” Scheier said. “She’s taking them at the end of July. I’m taking them the beginning of July. I’m going to get really good coaching experience just because the decisions are on me.”

About to start her fourth season at High Point, Scheier has elected to take her fifth year, which was granted by the NCAA because of the COVID season of 2019-20. She will be starting work toward her master’s degree in January.

Scheier also plans on helping Coach Catrina Green at West Forsyth this fall as much as possible as part of her internship.

“For them to actually see me do it — the girls who are shorter, I can show them, ‘Look, it doesn’t matter if we’re shorter. You’ve just got to take care of all the things that you can control and be the best at that. And dive for loose balls, and being a pest on defense, and all of those things,’” Scheier said. “And if they come and actually see me do it, it can give them some motivation to say, ‘She does it, and I can do it, too, kind of thing.’”