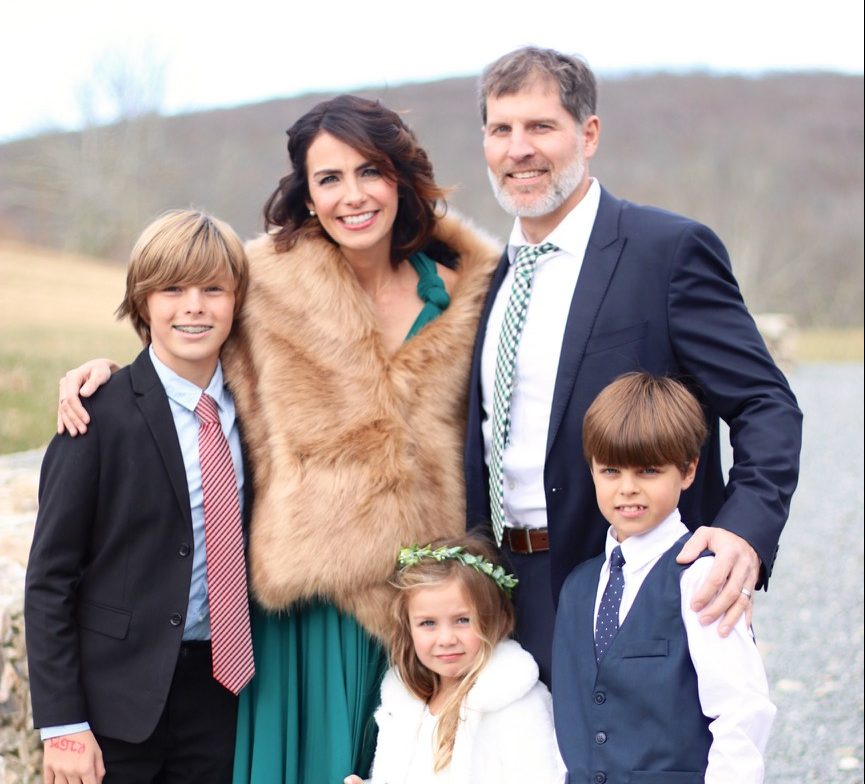 Cass Key with her husband, Preston, and children Hayden, Langdon and Sydney

Cass Key grew up in Lexington. With a household of children, there was never a dull moment or shortage of entertainment with siblings.
“I was 5 years old when my parents got divorced. I really credit my parents for having the most functional divorce scenario possible. They were very mature about it and the kids always came first,” Key said.
“I think about it now as I raise my own children. They wanted to be around us at every possible moment whether it was attending a tennis match or a school event even if it wasn’t their night to have us.”
Key’s parents remarried and expanded the siblings from just Cass and her sister with an additional five more with both step-siblings and half-siblings. “I always felt that even though there were so many of us, if there was ever something we wanted to try, my parents and stepparents would make it happen,” Key said.

Key tried many different activities as a child including tennis and theater.
“I also ran track as a kid and high jumped at West Davidson High School. I enjoyed it a lot,” Key said.
“I did various things from gymnastics to ballet and enjoyed all of them, but I was never great at those sports and activities,” she said with a laugh.

Key knew she wanted to further develop her love of art and sense of creativity.
“When I was deciding where to go to college, I wanted to go somewhere for interior design. I looked at places like N.C. State University, Virginia Tech and High Point University. Some of those schools were really intimidating because you had to have an extensive art portfolio that needed to be presented during an interview process. I remember when I went to the N.C. State interview, the weekend before I spent hours and hours working on a portfolio since at my school, they didn’t have any art classes that had been quite that serious. Right after that interview I had gone to visit High Point University and everything about that experience clicked,” Key said.
Key was awarded the presidential scholarship. “In all of my life I have tried to listen to my gut feeling. When I was there interviewing for my scholarship, I met my future roommate in line who was also awarded a presidential scholarship. We have been friends ever since. It was the best decision for me, and I am so glad that I made it,” said Key, who was also accepted to other schools like N.C. State University as well.

While at High Point, Key immersed herself in the interior design program. She also took advantage of the Greek system and joined Alpha Gamma Delta. “On a small campus it was nice to have a way to get to know more people. I also did musicals while I was at High Point which was fun,” she said.
Key was the president of the organization her senior year.

In addition to her studies and extracurricular activities, Cass kept crossing paths with a student named Preston Key.
“Preston is the type of person that when he’s in the room, everyone notices him. I sure did too. He was very handsome and even though he could be shy he had a presence about him. Towards the end of my time at High Point we finally went out on our first date of playing tennis,” Key said with a smile.
“We started dating until I graduated. Preston was a year behind me in school. Since he was from the Washington, D.C., area I figured that when he graduated, he would take a job up there. I had found an interior design position with Rowe Furniture in McLean, Virginia. I was surprised when he ended up going to Chicago, Illinois, when he graduated a year later. We broke up for about a year and a half,” Key said.
That time apart made it very clear to both Preston and Cass that they missed each other.
“After that year and a half, we realized how much we had thought about each other and got engaged and married in 2003,” Key said.

As newlyweds, Cass ended up joining Preston in Chicago for about a year.
“We took full advantage of our time there. I remember having that iconic Chicago moment playing flag football in the snow in the middle of winter,” she said.
“After two summers and one winter, we knew it was time to move closer to home. We both found jobs in Washington, D.C. I began working as the director of interior design services for Urban Country Design and really gained a lot of valuable experience.”

During that time, the Keys expanded their family while living in the nation’s capital. Hayden (15), Langdon (11), and Sydney (7) were all born during the Keys’ time in Washington, D.C.
“Our family was happy to come up and watch the kids for long weekends, but we relied a lot on great babysitters, nannies and friends to help us out. Even now, I’m so grateful to have a strong support system of friends and the community to help when needed because of this time period. I’m not scared to ask a neighbor or friend for help, and always want to be there for mine too. It’s amazing what a village can do together,” reflects Key.

In 2016, after being in Washington, D.C., for more than a decade, the Keys decided to move even closer to home and head back to North Carolina. While in D.C., Preston and his brother were running a business they owned, N-Route, which had become the premier white-glove delivery service in the northern Virginia, Maryland and D.C. area.
However, Preston was offered a position at Woodbridge Furniture Company that he could not pass up. “I started working at Meg Brown Home Furnishings part time and loved it. We got connected with them through one of Preston’s colleagues and I saw quickly why they have such a great reputation in the community. They always put customer service first and respect their employees. The Browns have such a healthy work-life balance too that I really admire that. Both Davin and Megan have become lifelong friends too,” Key said.

Almost two years after the Keys’ move to North Carolina, Cass was offered the creative director position at Woodbridge Furniture Company. “As much as I knew I was going to miss working at Meg Brown Home Furnishings, I was excited to take on this new role. I still get to work with them in other capacities now for which I’m grateful,” she said.
Key is involved with product development, which is a passion for her.
“One of my favorite days is when our team collaborates in a conference room to see how a piece is curated down to the next furniture market selection. Everyone respects each other’s opinion. It is so neat to see how well everyone’s ideas are complimented when we work together to bounce off ideas and inspiration. I love helping with the aesthetic component of the pieces, picking finishes and hardware is so fun,” Key said.
“I enjoy doing the showroom designs too. Megan Brown helped me design my first showroom and we had a blast doing it. At Woodbridge we like to collaborate with designers, and it was rewarding to do it with someone who is also a friend that has such incredible talent.”

When Key isn’t wearing her creative director and designer hat, she is supporting her kids in their activities.
“Preston and I both enjoy seeing our kids do what they love,” Key said. “Whether it’s tennis, swimming or something at school, we like watching them challenge themselves. We felt very lucky when we moved that they had attended the Winston-Salem Montessori School. I was blown away by the ways they taught our kids to be independent thinkers and learners. It was such a great place for them to get a foundation for loving to learn. If one of my kids was really into a specific project that day whether it was around math or science, they encouraged them to stay with it until they were finished with it and were ready to move onto the next task. The kids really are encouraged to explore their brains in such a healthy and patient way.”

In addition to school, Key’s family felt very embraced by their church, Hillsdale United Methodist Church. “I am getting ready to go on a mission trip to Myrtle Beach with my son, and I’m so excited. Our church is really a special place. My kids have really immersed themselves in the youth and high school programs and it has become a big part of our lives,” Key said. “I love working with the youth. It’s such a special age.”

“Everything really fell into place when we moved here. I feel so fortunate. Places like the Jerry Long YMCA have been a great escape for our family too. I utilized the childcare program so I could work out and get a little ‘me’ time, utilized activities for the kids, and it was so convenient and close. This really has been such a tremendous place to raise our family, make friends and still have careers that we are so passionate about,” Key said.
“I’m currently reading a book that always gives me good takeaways after each time I sit down. One of them was that we’re all just trying to raise good people who are a part of their community. It doesn’t have to be perfect.”