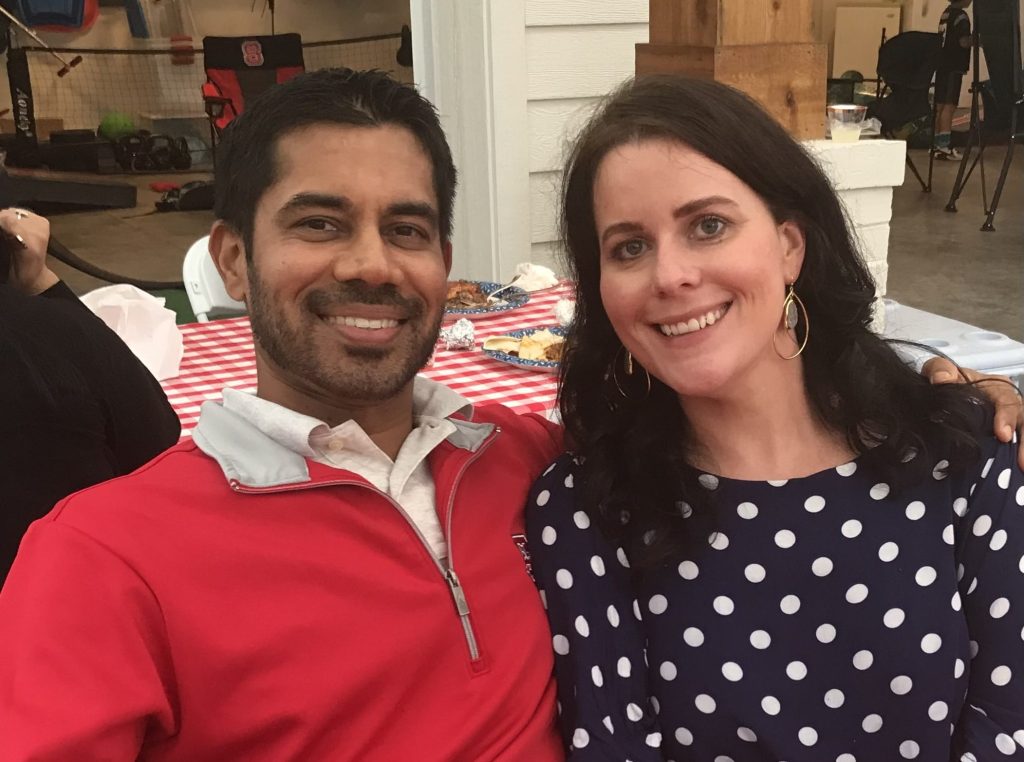 Dr. Deval Desai grew up in Greensboro as the youngest of two boys. Three years younger than his older brother, their parents had spent all their life in India prior to immigrating to the United States.
“In India, playing tennis was held in high regard, and my parents wanted to share that with us. Over there it’s not like it is here where you play a bunch of different sports to find the one you liked best. My brother and I both picked up tennis and enjoyed it tremendously,” Desai said. Starting at the age of 8, Desai spent a lot of his weekends playing in tennis tournaments.
“Even as a young kid, I thought I would try and play in college. Especially after I saw my brother play at N.C. State University, I had plans to try and make it at the next level myself,” he said. Desai ended up walking on to the Wolfpack’s tennis team when he started college in 1998.
“It’s tough at first being at the top of the pecking order when you’re in high school, but I wanted to prove myself,” Desai said.
His efforts paid off his freshman year when he was able to play in the top six in men’s doubles.

Desai had also known from an early age he wanted to be an optometrist.
“Having glasses and experiencing firsthand that field as a patient, I had been intrigued. After my sophomore year at school, I decided to buckle down even more with my academics and so I stopped playing tennis my junior and senior years,” Desai said.
Desai had begun working at an optometrist’s office in Cary which affirmed his desire for his career path.
“She is a great optometrist and that opportunity showed me that I was making the right choice. I was able to get my feet wet by performing a lot of jobs that technicians handled in that field,” Desai said.

Desai began the process of applying to optometry school his senior year.
“The optometrist I had worked for in Cary told me a lot about the Pennsylvania College of Optometry (Salus University). For optometry school, that program seemed very respected, and it became my first choice,” Desai said.
He was excited to hear that he was accepted into the program and would be attending in the fall of 2002.

Right after Desai graduated from N.C. State with his bachelor of science degree in biological sciences in 2002, he was looking forward to having some down time the summer before going to optometry school.
“In college, a lot of the athletes hung out together. Little did I know it at the time but a gymnast at N.C. State, Laura, was the cousin to my future wife, Rebecca.
“Laura had been dating my roommate and they were planning to go up to Massachusetts for a week and asked me to join them. I didn’t really want to be the third wheel,” Desai said with a laugh.
“But they both convinced me it would be a fun trip, so I finally relented. I first met Rebecca when we were picking up a family member, and we kept running into each other at different places. We struck up conversation each time we saw each other. Finally at the end of our weeklong trip that had us going to Boston and New York City, Rebecca and I exchanged email addresses and phone numbers.

“When I got back home, I remember walking to the computer lab to check my email and saw a message from Rebecca. That’s how it all started for us in the fall of my first year at optometry school. We talked non-stop after that, and we began our relationship even though we didn’t live in the same town.
“I appreciated that Rebecca came down every weekend my first year because of how much I had to study. It was four hours one way.”
Rebecca had decided to transfer to a college closer to Desai after a year of dating and their relationship becoming serious in 2003.
“That made things a lot easier,” Desai said. “Although, after the first two and a half years of optometry school, I had to go on rotations, so we did have long distance involved until we got married.”

After Desai had graduated in 2006, he and Rebecca chose to move to Massachusetts for a while. “I always knew that I wanted to end up in North Carolina again, but Rebecca spent her whole life growing up in Massachusetts. We stayed there until about 2007 when we learned my dad had leukemia. My dad wasn’t responding well to the treatment, and I wanted to move home to help take care of him. At the time my brother was living in New York, so I also wanted to be there for my mom as she went through it too,” Desai said.

Unfortunately, Desai’s dad passed before he could move down to North Carolina permanently.
“He knew I was in the process of moving, and that I could also help with my mom once he did pass. I think that gave him peace and comfort. After my dad passed away, my family and I went to India for a month. We were able to grieve and get closure with my extended family. My dad was cremated, and we did all the ceremonial tributes for my dad, like spreading his ashes on the Ganges River. I know that would have meant a lot to him” Desai said.

When Desai came back from India, he had passed the boards to practice in North Carolina. Deval and Rebecca got engaged in 2008 and married a year later.
“We were ready for the long distance to be over and to start our lives together. We had two beautiful wedding ceremonies within two weeks of each other. One reflected my Indian culture and the other one was at her parent’s farm in Massachusetts,” Desai said.

Once they were married, both Rebecca and Deval were able to finally be living in the same place and started their lives together as newlyweds.
“Rebecca was able to work remotely with her job, and I began working in primary care optometry,” Desai said.
Desai spent his days diagnosing, treating and co-managing ocular eye disease. Having been recognized during his externships for his work in low vision at the internationally renowned William Feinbloom Low Vision Center and Thomas Lynch Pediatric Clinic, Desai was a standout candidate when interviewing for jobs.

After gaining valuable experience working with other optometrists, Desai took the leap of faith to open his own private practice in 2012.
“I learned of an opportunity to start my own practice, Desai Vision in Lexington. I expanded the practice to include a Mocksville location in 2016. I have really enjoyed that experience a lot. We have the capabilities to manage a lot of conditions. It’s not just for getting glasses and contact lenses. Because of the instruments we have in house, we are able to take pictures in the back of the eye, manage and detect eye disease, and macular degeneration. This includes having the ability not to just diagnose them but to manage and treat them. I feel lucky that I get to do something that I am passionate about each and every day,” Desai said. “I also have a great team to work with at our office.”

When Deval is not working at Desai Vision, he can be found spending time with his family. He and Rebecca expanded their family with son, Arjun (7) and Veera (3) once they moved to North Carolina and established their careers.
“Every cliché about it being the hardest and most rewarding thing you’ll ever do is so true. It’s fun to see them form their personalities and interests. Right now, Arjun is playing so many different sports from soccer, basketball and tennis. He’s finding he enjoys so many of them,” Desai said.
Desai is helping another generation of athletes in his family further their love for tennis too. As a volunteer, Desai assists the Forsyth Country Day School men’s tennis team when he can.
“It’s fun to get out there when my schedule permits to hit with those kids or play matches. I’ve known the head coach, Harold Moore, and was excited to be able to help them out and get involved with the program. It was exciting for them to win the state championship this year,” Desai said.
“I see Arjun developing a love for the sport when he plays himself and joins me at the matches with the team. I can’t wait to continue to watch my kids grow and develop. It makes me sad that my dad doesn’t get to see their journey. I never knew my dad’s father either because he passed away before I was born. I hope that I can have a long and healthy life so that one day when my kids have kids, I get to know the role of grandfather too.”