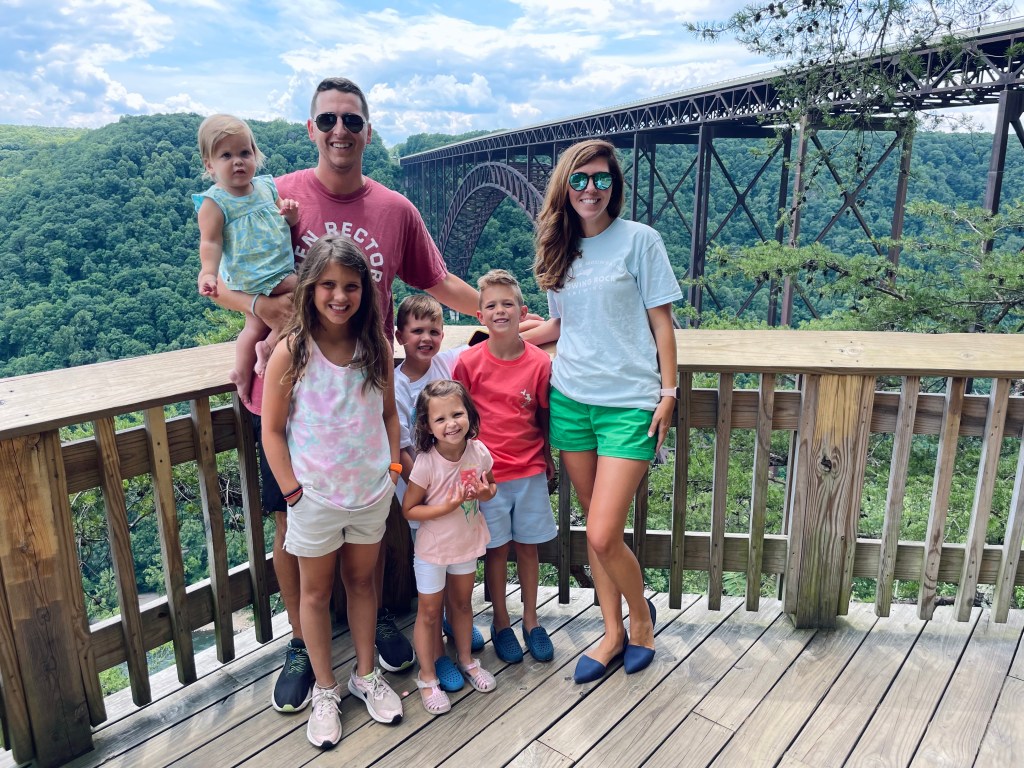 Submitted photo John Michael Bonasso and his wife, Ashley, along with their children Georgia, Myles, Luca, Adela and Helen

John Michael Bonasso grew up in Charleston, West Virginia, as the fifth child of six children. The perk of having a larger family has always been that life is never dull. “We were always doing something outside. We camped, went to the beach, swam, and hiked,” Bonasso said.
“Although my parents themselves never played organized sports, they had all of us in them from an early age.
“I got the opportunity to try a bunch of different sports from soccer, swimming, tennis and track before I discovered what I enjoyed most. From high school on, I focused primarily on swimming.”

Although Bonasso could have been a swimmer in college, he knew at that point he wanted to just focus on being a college student.
“I chose to attend West Virginia University where many of my family members had gone. I even stayed in the same dorm as my grandmother had done which I thought was neat,” Bonasso said. “I had no clue what I wanted to study. I strongly considered going pre-med but realized that was not for me. Then, I thought as much as I enjoyed sports growing up that exercise physiology made sense, but my dad really convinced me that business school was the way to go.”

While trying to figure out what Bonasso wanted to do professionally, he fatefully met his future wife, Ashley at West Virginia.
“We were both very involved with Campus Crusade for Christ. We had been friends for a while before we started dating. She came to college dating her high school boyfriend, so it wasn’t until a couple months after they broke up that we started going out. We got engaged our senior year of college, and married after we graduated in 2009,” Bonasso said.
“Right after we graduated and got married, we both had jobs but not yet careers. I had started a job in banking. It took us about a year to realize it wasn’t what we wanted to do with ourselves. We had created a vision board of all the things we wanted to accomplish.”

One of the items on the Bonasso’s vision board was the World Race.
“It’s a Christian mission trip where you do service projects in 11 countries in 11 months. You have to raise the money to go on it. We thought when we asked our parents for their opinion, they would say we were crazy, however, they were fully supportive. They encouraged us at that point in our lives to go for it. From March through September 2011 we raised $30,000 so we could go on our mission trip. With that money we would have to live on $12 per day while we were gone,” Bonasso said.
“I was humbled by the way others live in comparison to us. It changed my perspective on what was important. When people joke about first-world problems, it is a very real thing. We were encouraged not to bring our smartphones. That was the most freeing thing to really immerse ourselves in that experience. We were in Asia, Africa, Eastern Europe and Central America throughout the 11 months. I will be forever changed from it.”

The World Race mission trip was the reset the Bonassos needed to reevaluate what they wanted to do with their lives. “Ashley started back in nursing, and I continued in finance which was short-lived. I had a best friend from college who encouraged me to work for the same tech company that he was working for. The only con was that it was in Pittsburgh, and Ashley, having lived there for a while, wasn’t keen on going back. She was given a lot of job offers though, and it made sense for us to at least try it.
“I began my position at Net Health as senior client sales executive and immediately knew I found the career track that I enjoyed. It just clicked. While starting a career, we found out Ashley was pregnant with our oldest, Adela (8). We also found out that Ashley’s mom was diagnosed with breast cancer at the same time. We are both very close to our families and being there for Ashley’s mom as she fought cancer was important to us. I asked the company I was working for if I could work from home, and they said yes. We picked up and moved to North Carolina at that point so we could be there as her mom did surgery, chemotherapy and radiation treatments.”

As the Bonassos overcame cancer, they also had other celebrations within their family. They welcomed Luca (7), Myles (5), Helen (3) and Georgia (1). “I always knew I wanted a big family. I had loved it myself growing up and being involved in our children’s lives is so rewarding. It has taught me a lot about grace with my own parents now that I’m in that role,” Bonasso said.

Another important aspect to raising children to the Bonassos is giving back to the community. “While we aren’t able to do mission trips on the same scale as the World Race, we do believe in giving back here locally. We have been members of Calvary Baptist Church where I am a deacon. Ashley volunteers as well and our kids are very involved,” Bonasso said. He is also on the board at the Davie Pregnancy Care Center which supports women with unintended pregnancies.

“Being part of a community where I can raise my children is imperative to me,’ Bonasso said.
“We have so many great friends and neighbors we feel fortunate to raise our children around. We have Ashley’s parents in our neighborhood, and some of our other family is in North Carolina too so we always have someone close by.
“I even started a new job that I’m really excited about at Doximity as the regional vice president for Hospital Partnerships. My same good friend from college thought I would be a good fit for the job, and it’s been a tremendous experience. I feel fortunate that I have been able to find that work and life balance. Being there for my kids as they grow up was something that I always knew was essential to both myself and Ashley. We only get to do this once.”