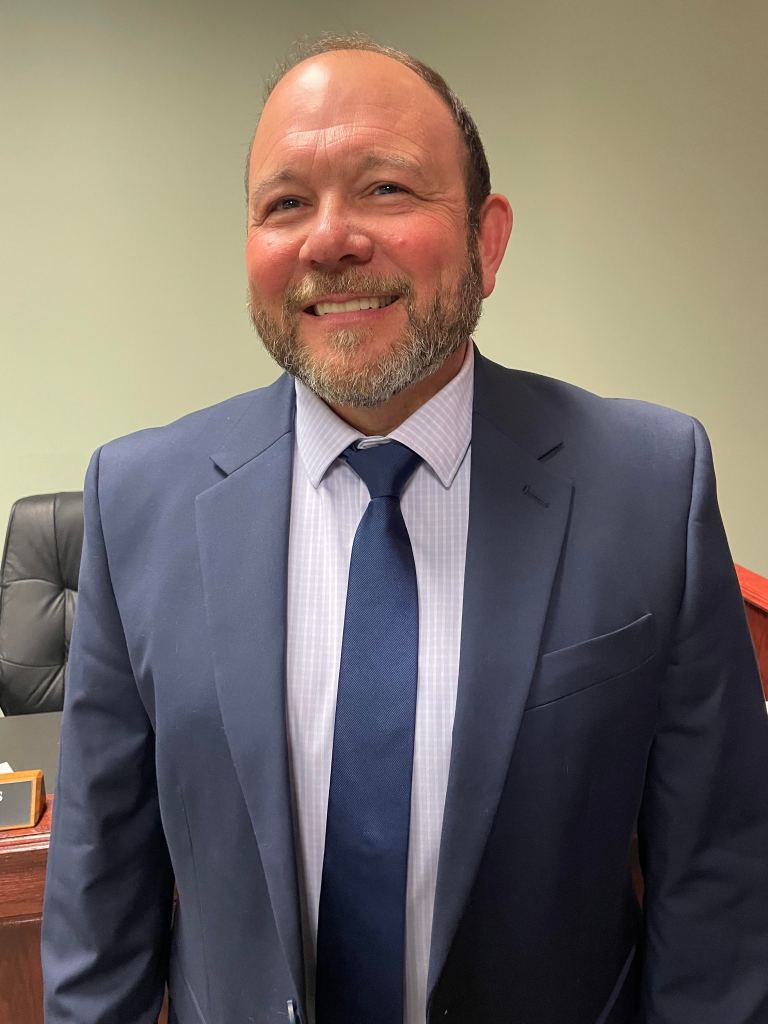 When it came time for Bermuda Run to start the search for a new manager, the town didn’t have look far.
In fact, Andrew Meadwell has been to quite a few town council meetings in his role as senior planner and director of Davie County Development and Facilities Services for the past 18 years.
So when longtime manager Lee Rollins decided to step down in May, Meadwell — with his vast experience and familiarity with the community — was an obvious choice.
“When Lee made the decision to walk away and do something different, my name kind of surfaced as, ‘hey, this would be a good fit,’ ” he said. “And I think a lot of it had to do with my involvement with the town over the last 10 to 15 years just being involved, mostly on the land use side of it, but that’s probably land use and transportation at the top of hit list now.”
Meadwell, 51, who grew up in King and graduated from UNC Greensboro with a degree in urban planning, held previous positions as assistant planning director for Stokes County and then subdivision administrator for Wake County where he was based in Raleigh. He was in his role for nearly two decades in Davie County but admitted he had been considering something different in recent years.
However, he said that said Rollins’ departure caught him by surprise.
“Lee announcing wanting to take a new path, it was kind of out of the blue,” Meadwell said.
“Lee and I kind of talked in general about a succession plan. He knew I wanted to do something different, but it had to be the right situation because I was happy in Davie County. Someone asked me the other day how’s it going, and I said, ‘well, it’s the same seat, just different kinds of issues.”
In addition to his relationship with Rollins and witnessing “the great leadership and when I looked at coming here from mayor down to the elected board and mayors and boards of the past,” Meadwell added, “it’s a very stable mission they want to accomplish and a close-knit knit kind of group around here.”
As for what he considers the biggest challenge ahead in Bermuda Run, he said, “I think it’s the continued land-use issues and transportation.”
And in last Tuesday night’s meeting, when he was sworn in as the new manager, Meadwell listened to a couple of residents address that subject in the public comments portion of the meeting regarding a rezoning request that was withdrawn in May, which has now resurfaced, for 22.5 acres behind Lowes Foods for a proposed multi-family residential development with 270 units.

“Our No. 1 concern is the zoning issue,” said Patricia Williams, who brought up the latest proposal of spot or conditional zoning for the project while addressing other issues in her remarks.
Tim Deegan said that although Kinderton has not be contacted related to the development, “we have heard it through you folks. One of the concerns is that the company still wants high-density apartment complexes, and they still haven’t resolved the U-turn situation related to the two roads coming in.”
Following the meeting, Meadwell said there’s been a lot of discussion in the community but no formal application for this conditional zoning for the previous request calling for rezoning the tract from Commercial Mixed (CM) to Village Mixed (VM). The project had been met by overwhelming opposition by residents of Kinderton Village, and the Planning Board voted to recommend denial in its April meeting before Hillsdale Group LLC withdrew its application on the day of the May 10 town council meeting.
“Because they withdrew the former application, if they do ask for this new type of zoning, now it still may be Village Mixed, but it would be a conditional district Village Mixed,” Meadwell said. “It’s just like a brand new hearing going before the Planning Board, and they will make
their recommendation to council and the town council makes the final decision.”
In other highlights from last Tuesday night’s meeting, the council:
• Adopted a resolution designating the new town manager, Andrew Meadwell, as the designee to make recommendations to the N.C. Alcoholic Beverage Control Commission on ABC permit applications.
• Heard from Meadwell that work on the Kinderton Village access easement to RISE has started with it expected to be a 60-day job and that work is also scheduled to start on the wastewater treatment plant. In addition, he said that Bermuda Run has been awarded a $400,000 wastewater grant through the State Water Infrastructure Authority through NCDEQ with the money to be used to map the town’s existing wastewater system to see where problems are.
• Also heard from Meadwell regarding the proposed Chick-fil-A in Bermuda Run, saying he could verify they have applied for their building permits but have not obtained them yet. He said he has placed a couple of calls to check further on the status but has not heard back yet.
• Heard from Mayor Rick Cross that Sam’s Ice Cream has opened beside Davie Tavern in the Food Lion shopping center on U.S. 158, and that the next concert on Town Square will be Aug. 13 at 7 p.m. with Trial by Fire Journey Tribute Band performing.
• Prior to the meeting, the town’s Christmas tree, which was purchased by the Bermuda Run Garden Club and installed last November, was dedicated at the Town Center on Kinderton Boulevard. Stacy Cornatzer installed the plaque in a permanent concrete mold.